Has it really been ten years of gift-giving? Join QT3 in the annual tradition of giving gifts to – and receiving them from – Internet strangers.

QT3 Secret Santa is a non-denominational gift-giving game in which you are secretly paired with another QT3 member to whom you are tasked with giving a gift, and paired with someone who sends you one, too.

For reference, here are the previous years’ compilations of Secret Santa:

Assuming we have critical mass of at least 10 participants, let’s play!

Deadline: The cutoff date for participation is Tuesday, November 1, 2016. After this date, I (fire) will post all of the participants’ handles and begin matching Santas with Santees (secretly, of course).

Personal information: Please note that the exchange of personal information with any other QT3 members is not required, and that any information you send to me (the organizer) will remain strictly private. I will not disclose personal information to anyone other than your Santee unless you expressly give me permission. In previous years, there were some QT3 members who were asking for other people’s addresses to surprise them with gifts. Please understand that in order to protect people’s privacy I simply can’t do this.

‘In!’: To participate, fill out the Google Form and post in this thread to indicate you’re in! Participation includes a) being a Secret Santa for someone, and also b) being someone’s Santee.

Here is what I’ll need from you (the form linked above will ask you for these things):

Your mailing address. You can use your QT3 handle or a pen name if you prefer.
Your shipping preference. The choices are: Domestic (to your home country), Continental (in your continent); International (anywhere in the world). If you have no preference or don’t mention your preference, you will be placed in whichever bucket I find most convenient for me.
(Optional) Your wishlist, if you have one, or want to share one with your Santa. You can also post your wishlist in the thread (publicly) if you like. Having (and sharing) a wishlist is not required.
(Optional) Any special requests (relatives, roommates, allergies, etc.)
Getting a Santee: After the deadline, I will send you (by e-mail or PM) your Santee’s address and wishlist, if provided. You will be responsible for getting a gift to your Santee. If you are shipping internationally, plan ahead, and get your gift out at least three weeks early. International shipping (especially around the holidays) can take extra time. Your gift should arrive in time for Opening Week. No freeloaders! If you don’t give a gift, we’ll know.

Giving a gift: There is a $20 minimum gift value; no maximum. You can send gifts directly from a retailer, or from your home.

Receiving a gift: When you receive a gift from your Secret Santa, it’s helpful to post in the thread saying you got it – it puts your Santa’s mind at ease. Or you can e-mail or PM me, and I’ll do it for you.

Requesting a gift: You can subtly or not-so-subtly talk about things you’d like to get in this thread, although that in no way means you’ll get what you ask for.

Keeping track: We’ll keep track of who is participating at the top of the thread. The list will be in alphabetical order. After the exchange, fire will post a summary of the Santa to Santee pairings, and links to the opening posts.

Opening Week!: On the week of December 19, 2016, we begin opening gifts. Have a camera ready so you can snap a picture and get it in the thread!

Previous offenders: If you have participated in QT3 Secret Santa in the past and did not send a gift, you are ineligible for participation this year. Sorry.

Problems: If you encounter any difficulties, or have any concerns during the process, please e-mail (fire.qt3 at gmail) or PM fire.

Finally, a shout-out to Ryan Markel who was the previous years’ chief organizer for QT3 Secret Santa I-V. 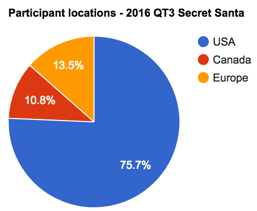 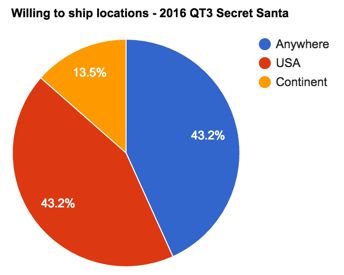 I’m in. @Janster, I’m still reminded of you on an almost daily basis.

I’m in! I hope everybody wants a case of Moonpies and some RC Cola!

A) I am so very, very in. One of my favorite things about Qt3! And endearingly, I still put gifts from my last three Santas to use virtually every day all around the apartment.

All right, I’m in for the first time of hopefully many.

I’m in. @Janster, I’m still reminded of you on an almost daily basis.

Thank you, it was my pleasure, also pleased you are keeping yourself regular :)

Also thank you fire for hosting another round, I’m in again, I’m sure this will be a blast.

I am so in! And if I counted correctly, that means critical mass has just been reached! :-)

In, for the first time. Be gentle!

In! I literally use last year’s amazing gift every single day.

You should totally pin this thread :-D

(not that I’m biased in favor of Santaing or anything)