I’m going to remove my above guess and say Sin and Punishment.

I played it on the virtual console and i don’t think the score was displayed that way (or they it looked as good). Please remove your guess

I had my coffee and opened up this tab. This thing I said to myself was hey isn’t that enemy from Sin and Punishment? You can’t Jedi mind trick me!

Indeed! The mystery game is EDF 2 Sin and Punishment, Treasure’s once-Japan-exclusive N64 rail shooter/slasher/other-er. Cower at the forces of the… what was the terrible name of the enemy creatures… oh yes, the Ruffians!

It’s got English voice acting for its weird story cutscenes, but only Japanese subtitles. All in all a weird one but really it deserves its place alongside Treasure’s other beloved gems. 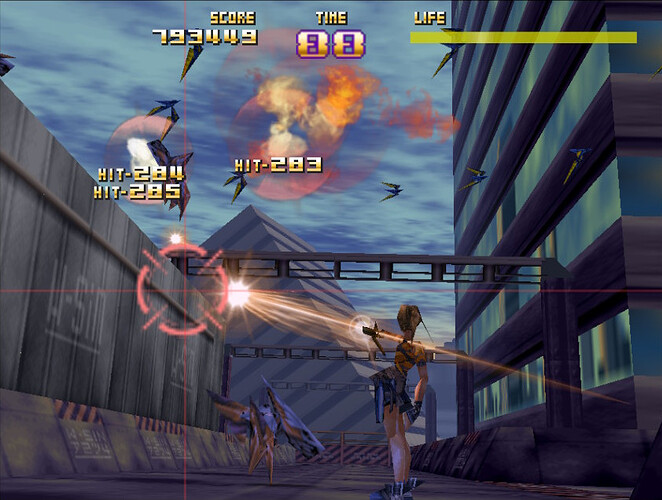 This capture is from the Switch’s N64 library. It does seem a little “cleaner” than you’d expect for an N64 game, though I can’t really remember quite how it looked back on the Wii VC.

The part of the wall that just says “SIN” happens to run through the targeting reticle lines I wanted to show, but that far one’s not terribly legible.

It was the consecutive hits that gave it away. Plus the enemy design is very unique.

Hopefully this will be an easy one.

House of The Dead?

Cinemascope games are against my beliefs, so I’m disqualified.

HoD is a good guess, but no!

Typing of the Dead

You got it!
Typing of the Dead: Overkill

I actually played that again a couple weeks ago for a little while :-)
I’ll get something up later.

I’m still doing stuff with the family. Anyone want to put a post up? @Scotch_Lufkin ?

Oh man, sorry guys, I kept meaning to post this yesterday but I wasn’t at home almost at all with errands to run. Here is shot number 4!