I don’t think it’s based on production costs at all. It’s entirely what the market is willing to bear. If consumers were willing to pay $999 for Call of Duty, that is what Activision would charge. Bobby K ain’t running no charity.

Games have never been cheaper than right now.

Source. (From 10 years ago. Games are even CHEAPER than this now.)

Yes we already covered that, “box” prices are low, and sales are frequent. That’s why so many games are aggressively monetized in an overtly predatory way.

I actually bought the $70 deluxe digital editions of TLOU2 and Ghost of Tsushima despite not really caring about the extras, mostly to just show my support.

$60 prices weren’t unusual. Here’s a picture of SSI’s Apple II prices in 1984. (Check out War in Russia at $80.) There is truth to the idea, though, that a larger base led to lower prices. C-64 prices would eventually often be a little less than Apple/IBM prices and Amiga and ST prices were often a bit more in the late ‘80s. (Disclaimer: US prices only.) 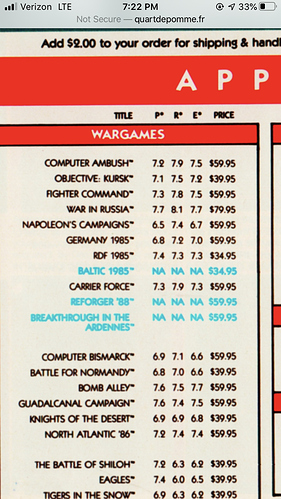 In 1984 I was buying full-price games for the ZX Spectrum for GBP4.95 (US$7). These were your typical young audience though, and wargames which you’d get by mail order were usually quite a lot more expensive. I recall when Ultimate (who became Rare Ltd) brought out the platformer Underwurlde for 9.95 (US$14) and everyone went apeshit! These were nice, full-colour, high quality cardboard packs complete with full colour manuals, pretty much AAA gaming at the time, so the price hike ultimately (see what I did there?) didn’t slow anyone down, but those wargame prices wouldn’t have been sustainable for kids like me back then. Of course, the ZX Spectrum was a cheap 8-bit machine, it wasn’t a “proper” computer, and doubtless the software prices reflected that.

I think the UK market was quite different from the U.S. one of the same time. The Digital Antiquarian goes into it at some depth. As someone whose main exposure to the UK scene was piles of pirated games and the occasional issue of Zzap! 64 magazine, I found it illuminating.

With the economic crisis going on, I won’t be surprised if this blows up in their faces.

With the economic crisis going on, I won’t be surprised if this blows up in their faces.

That’s why I made this thread. They have no need to raise the price since they’re games are so profitable, and they’re doing it at the worst time ever where people are in such a critical economic state. It’s evident some wealthy, out-of-touch MBA exec made this decision who has no idea what the average individual is going through. I too hope this blows up in their face.

I think people will wait to buy games on the PC as sales have trained people they only need to wait a bit and the price will come down. I could see this as a play to get people to buy the game at a higher discounted price rather then the new $70 dollar price.

Console games have always seemed to stay higher for longer and a lot of folks will buy games if their friends are buying so they can play together. I guess the question is if you are younger will parents fork out that money when times are uncertain? And who is going to rush out and buy the new consoles especially if the games cost more.

Don’t get me started on Neo Geo prices!

With people being out of money in the U.S. since unemployment is ending and Republicans deeming it just fine to let millions go bankrupt, inflation on food and every other critical necessity, I have a feeling 2K is going to see a major dip in sales if they keep those prices up (at least until deep discounts show up).

2k will be fine. Junkies always find a way to get their fix.

That’s a shitty way of putting it, but I think even $70 for a game people will probably play for hundreds of hours is a pretty good value proposition, and video games are certainly cheaper than rent, cell phones, cars, etc. I think many people would need to be on the verge of homelessness to forego it, although they might think twice.

Why have prices been stagnating/deflationary(?) since the 80s?
Maybe there was always an increase of new customers but now growth has come to an end. Hence prices will rise? What’s behind the (extremely unusual) price stability of games?

The single most important answer is that expansion of the available market outpaced both inflation and skyrocketing production costs for many years.

Marketing got much smarter over the years as well; while we never really developed the ancillary markets some hoped for, a deep and inbred kind of segmentation evolved with gold editions, ports, backports, and compilations. The key development was what we paint with a broad brush as “DLC”. It has fundamentally changed game economics. It has allowed larger games to shift risk downstream, especially for post-alpha asset creation, and let smaller games harvest their niche more effectively, while reducing user acquisition costs to nearly nil.

Balance sheets at the larger publishers are also buoyed by revenue streams undreamed of in the retail heyday, like the entirely new and different mobile market, games-as-a-service created by the MMO craze of the oughts, and the newest kid on the block, catalog fees for streaming services (which I suspect will merge with GaaS not due to price pressure but subscription overload). There are so many moving parts these days that single game line P&Ls are almost passé. Hell, I’ve had to account for real world-based arbitrage and currency trends in internal game currency, and that was nearly a decade ago.

Production costs, while of course increasing by at least four orders of magnitude over three decades, have been helped by some key changes. Innovations like EA’s amortizing development costs across yearly editions is one factor, as is the rise of truly reusable engines and asset creation standards. In fact, we would never have been able to grow to the team sizes we see today without de facto technical and asset standards, which subsidized the costs powerfully but invisibly unless viewed across time. Finally, production costs have been reduced (though not remotely controlled for) by the rise of displaced development and remote work. I’m not talking about the general lubrication of cheap asset outsourcing, but the large-scale efforts pioneered first at Ubisoft, with their proof that lower-wage colonies can produce AAA results if paired with tight central creative and cultural control. Now Covid-19 has proven what many have suspected, that physical co-location is only a valuable luxury, not a necessity. This, along with the tool and asset chain standardizations mentioned above, will lead further down the path of labor commodification.

All that said, though, the $60 dam had to break sometime. It’s largely a meaningless emotional flag at this point, but as you can see in this thread many gamers are quite emotional about it. I’m not sure that I would have been the person to bang my fists on the boardroom table and demand a higher price on a luxury good right now…