Tuesday is our 30th Wedding Anniversary and my wife is giving me a new computer. : )

I am loading the build at Xidax below and can use some guidance: 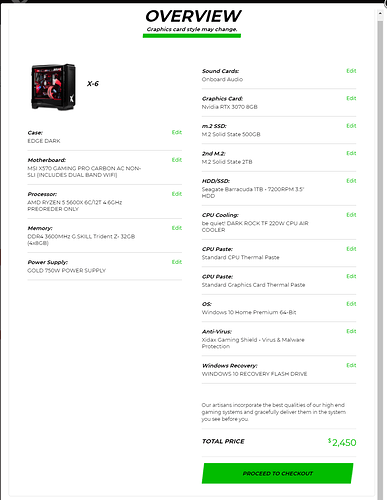 Questions:
I was thinking of having one SSD to simply hold Win10 and nothing else. A second SSD for games and for 50 bucks a regulars HD for anything else. I might be able to save a few bucks if i made the 1st SSD 2TB and forgo an extra SSD. Is it worth having the Operating system on its own SSD? It would not save that much money and I thought that if the first SSD ever goes I just have to replace it (but maybe I am overthinking it).

I selected the Air Cooler option for a Ryzen 5 5600X as there is no overclocking and I had a water cooler have problems once before so rather stay away from it. What is everyone’s opinion on Air Coolers?

I am completely lost on Graphics Cards. No idea how the Nvidia RTX 3070 is etc. I usually like to go 5 years on a PC at least so would want something that will go a while before upgrading but I do not need super duper graphics.

Memory - 32 gb was already selected in teh builder - I could go down to 16 gb - but am thinking 32 wouldn’t hurt in the future.

The Ryzen 5600X should come with a free stock air cooler , no?

I’d save some cash and just install the 2nd SSD when you have time, they are probably overpricing your on storage. :P

I don’t see any advantages in having 2 SSDs for the O/S games split you mention. You’re better of opting for a single, larger one. You can always split it into two partitions if you feel you need to.

After numerous failures due to evaporation, my opinion is that AIO water coolers suck to the point of being a dangerous liability and air cooling is the only sensible option. Noctua make some great ones. Stock one is fine.

There’s never a good time to buy a graphics card. :) Just get the best that you’re comfortable with price wise out of the 3000 series and you’ll be set for a good while.

I strongly recommend splitting your data and system drives into separate partitions, but yeah, no real need for a separate SSD for the purpose.

Thanks for the input everyone!

I went with one SSD 2 TB SSD and a 2 TB HD and the stock Air Cooler. No overclocking on the Graphics card.

Its been a while since I created partitions on a HD. Does it work the same on a SSD? And I can do that after it arrives or should I ask teh builder to do it for me? What would be the recommended space allocation for a Win10 only partition?

There’s no need to split them. Just make it one big volume. Wastes less space.

For our thirtieth I’ll give my wife the gift of not buying a computer that year.

I selected the Air Cooler option for a Ryzen 5 5600X as there is no overclocking and I had a water cooler have problems once before so rather stay away from it. What is everyone’s opinion on Air Coolers?

Definitely air cooling, and I like BeQuiet and/or Noctua if you want it to be particularly, well, quiet. If you don’t care about that, just about anything is fine; like you said, no real overclocking, so, anything works.

I’ll also just note, that while it could be a substantial price-jump, one of the 8-core AMD parts might be better if you want maximum longevity, just because the new consoles will be 8-core/16-thread, and game developers may begin designing specifically around that level of availability by midway or late in this generation in a way that could leave a 6-core chip struggling.

Obviously the still rumored 5700X would be perfect for you here, but if the goal is to buy super soon, well, c’est le vie.

About those 19 years you do not get them back so enjoy them to the fullest!

There’s no need to split them. Just make it one big volume. Wastes less space.

Maybe two times now I’ve needed to reinstall / update Windows. With the system on a separate logical drive, it’s just a case of formatting that partition and installing. Without, I think I would have needed to buy a new drive to be able to handle it effectively.

To do this properly though you need to move documents and the like off to a separate partition too, which is a bit of a pain to get set up properly. You need to junction from the default location, as while Windows will let you change your documents location freely, not all software will respect that.

If this is all sounding a bit too complicated for your liking, and only defending against a rare problem, I could well understand going with everything on a single partition. Particularly if you keep backups of your key data folders. It certainly does make it easier to go with everything in its default location.

One of my drives is 250GB and split into 4 partitions. As far as I can tell, this has wasted a grand total of about 10MB of space. Note that Windows does create a couple of extra partitions (a bit under 700MB) on any drive it’s installed on though, partitioned or not.

Its been a while since I created partitions on a HD. Does it work the same on a SSD? And I can do that after it arrives or should I ask teh builder to do it for me? What would be the recommended space allocation for a Win10 only partition?

Yes, same on an SSD, and pretty easy to do through Windows’ disk management interface (in administrative tools). My Win10 Pro installation is just under 60GB, so you’ll want to allow twice that. And more again if you’re not moving your documents folder to another partition.
The system partition needs to be created at the time Windows 10 is being installed, so you’d have to ask the builder to do that for you. You can set up other partitions later if you want.

I had already put my order in when you suggested 8 core over 6 as a possible solution for longevity. I think i maybe able to get it switched for about $150 difference. The parts have to be preordered so hopefully they can make the change.

I configured the system to have one 2 TB SSD and one 2 TB HD. I was planning on only putting data an the HD and using the SSD for games only. I will be using either Macrium Reflect 7 or Acronis to Image my disks for backup. I will probably partition the HD to store the SSD images as a short term with an external HD for longer saves.

There’s no need to reformat to reinstall windows. Just use “reset Windows 10” from the settings app.

These days you don’t even need to reinstall when switching from intel to AMD, or switching GPUs. Windows handles it fine.

So this happened most recently when I installed new hardware and windows could not be made to boot.

Yes, you had some issue with boot device priority or something.

I’m sorry, but that’s a bit patronising. I know how to select a boot drive, I’ve been building computers for 30 years now.

Was not meant to be, I had just skimmed your thread. What was the actual problem then?

The incident I’m thinking of was actually on Win 7, which really does not play well with USB 3.1 hardware. The plan was to install the hardware then upgrade windows. It didn’t go so well.

But you’re right, Windows 10 is vastly easier to install and reinstall than previous versions so it’s far less of an issue now.