Having been recently subjected to a truly awful example of a swimming pool scene, we got to thinking about how many great pool scenes there are in movies. Thus, this 3x3 about our favorite pool scenes, which discussion launches at the 1:37 mark of the Qt3 Movie Podcast of Tinker Tailor Soldier Spy.

Tom Chick
3. Hesher: throwing junk into the pool
2. Burnt Offerings: father and son horseplay in the pool gets a little out of hand

So what are your favorite swimming pool scenes? Hopefully you’re smarter than we are and can think of something other than your favorite movie from 2008. 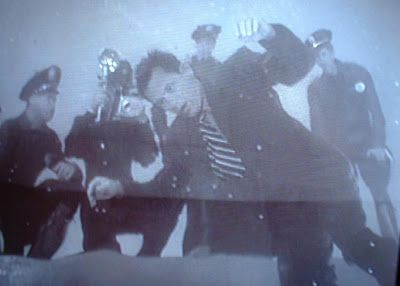 First one that came to my mind.

Kids: The sound it makes.

Fast Times and Wild Things. Is there something sexier than a woman climbing a pool ladder? I think not.

The remake wasn’t too bad, either. Annette O’Toole looked fine.

Boogie Nights, starting at 2:30 is one of my favorite tracking shots, as well as a perfect intersection of music and film.

To echo: Good one. My wife and I just watched this (rewatch for me) because TCMHD was going nuts with the Tournier/Lewton pics during Halloween. Goddamn that movie is still awesome, and that pool scene is fucking incredible.

Excellent picks so far. No one said Showgirls? Good.

I AM A GOLDEN GOD from Almost Famous.

Getting a Mogwai wet at the pool in Gremlins, although i may be conflating it with A Nightmare on Elm Street 3: Dream Warriors.

Fast Times At Ridgemont High was the first in my mind, too.

I want to say Cocoon because I remember a swimming pool scene but I don’t REALLY remember the details all that well. And I can’t think of any others.

Christmas Vacation Clark imaging the innocent fun of having the pool in the backyard before it turns not-so-innocent.

Christmas Vacation Clark imaging the innocent fun of having the pool in the backyard before it turns not-so-innocent.

That was in Christmas Vacation?

I remember the pool scene from plain, old Vacation, definitely.

What? No love for Sexy Beast? With the boulder in the pool?

I would link a picture, but the actor is wearing such a tight yellow speedo, you can tell his religion.

History of the World Part I-
“We flattened their fingers, we branded their buns!
Nothing is working! Send in the nuns!”

Only one I could think of that wasn’t already mentioned, but my other two were Caddy Shack and Fast Times

People have already named mine, but anyway.

Cocoon, because the swimming pool is a central focus of the movie.
Wild Things. Goddamn.
Does the moon pool in The Abyss count?