We discuss our favorite Mexican standoffs at the 1:24 mark of the Qt3 Movie Podcast of Free Fire.

Also, try to see Free Fire in a movie theater, if you can.

Send in your picks to [email protected]

That was an interesting 3x3 all around. I’m always grateful when someone reminds me of Fail-Safe.

The Cold War selections were interesting, although I think that both of those movies focus on the denouement after the first gun is fired, not on the standoff itself. For my money, a better Cold War choice is Thirteen Days, which is all about the staredown between nuclear superpowers. More importantly, it stars Kevin Costner.

That was an interesting 3x3 all around. I’m always grateful when someone reminds me of Fail-Safe.

The Cold War selections were interesting, although I think that both of those movies focus on the denouement after the first gun is fired,

You make an interesting point, although I don’t think I can go along with it, but maybe that is wrapped up in my objection with your use of the term denouement to describe all of the rest of the actions of the movie(s). That’s not really what a denouement is, since the denouement hardly can be said to directly follow the inciting incident unless you intend to ignore the rest of the drama in a story. You’re basically saying that the entire movie is epilogue.

It’s an interesting interpretation that you bring up, nonetheless. Is the bomber group that crosses the fail-safe point the bullet, or the gun? Given what the president tries to do, that is recall or destroy the planes, can you really make that an analogy to the first shot being fired in a confrontation such as a Mexican standoff?

The real elements that make this a Mexican standoff in my way of looking at things is the nuclear arsenal of both countries. The whole idea of all the other bullets that are to be fired, and the global consequences. Given the stakes, neither side can withdraw in safety. And you are kind of correct, in that one of the reasons they cannot recall is that a shot has been fired, albeit inadvertently. Although, this is the fault of both sides of the conflict, for various reasons. So I don’t think I can accept your way of putting it, that the entire movie is all just resolution after the first gun is fired.

Also, I love this poster, because the tagline is just priceless: 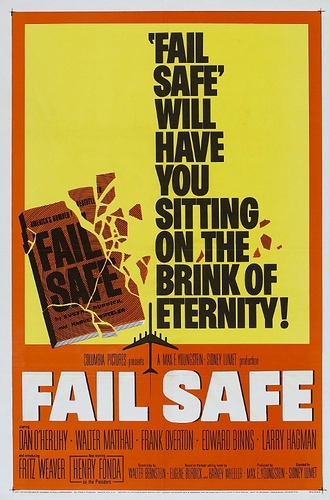 I don’t think I’ve seen Thirteen Days, though. So maybe I’ll take a look at that to determine if I agree with you that it’s a better choice. I cannot believe you’d choose that movie over X-Men: First Class as the more accurate depiction of the Cuban Missile Crisis though. How dare you!

Really?! No mention of The Good The Bad and The Ugly? Shame on you!

Really?! No mention of The Good The Bad and The Ugly? Shame on you!

No kidding. That scene should be included in the dictionary definition of Mexican standoff. I like this one too, if no other reason than it’s the only Mexican standoff I know of in which one of the characters says she has to pee:

This is why it pays to actually listen to the podcast…

I too was shocked by the omission The Good, The Bad, and The Ugly (almost put TGTB&TU, but that looks like shit), but I figured that a listener must have included it so I listened to 3x3 portion of the podcast prior to posting my dismay. Much to my delight, The Good, The Bad, and The Ugly is not just a listener pick; Tom goes into deep analysis about why he has some reservations about calling this classic scene a Mexican standoff (point taken, but dismissed) and how he thinks that Blondie (no, not that Blondie, Mr. Sumner) is a dick.

Guess what, Tom? Blondie was always a dick. He’s only The Good by default.

…and since I love the freakin’ musical watch motif from For a Few Dollars More, here is a very similar scene that I thought was a standoff, but it is actually just a gunfight with an ‘observer of interest’.

Guess what, Tom? Blondie was always a dick. He’s only The Good by default.

You know, that works for me. I guess the alternative was calling the movie The Not So Bad As the Others, The Bad, and The Ugly.

I know The Good, The Bad and The Ugly tends to get the lion’s share of the attention, for my money For a Few Dollars More is the best in the series.