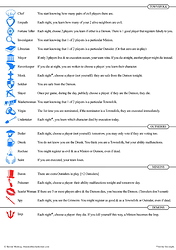 And the Order of Operations at night can be found here: 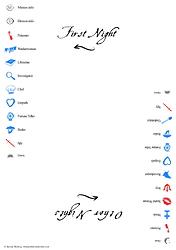 When nominated, a player will be given the opportunity to present a defense. After that, I will call for voting. Voting is done openly and in thread. Open discussion is permitted during the voting period, Private discussion is not. After all players have voted, or 24 hours have passed from when the vote was called, the votes will be counted. If there are a number of YES votes greater than or equal to half the number of living players, then the nominee is “about to die.” If not, then they are safe for that day.

Currently, there seem to be 7 people interested. We can run with that many, or wait a bit to see if more people will join up. The maximum player count is 15 so there’s plenty of room.

Looking forward to it. The notes on each character from the scenario link are pretty helpful.

Sounds interesting, I’ll join if there are still open spots.

Ok, I’ll join. Sounds like it could be fun.

How often is posting “required” / expected?

(LONG ago, I tried PbyForum Werewolf at BGG and it went fine… but twas annoying that people were suspicious of others, in part, merely because of the infrequent nature of their posting)

Well, being quieter is a good idea for several of the good roles, it seems.

I watched the SUSD video, I’m sold. Sign me up, though I still have to read the rules soon.

How often is posting “required” / expected?

I think that frequency of posting is rarely an issue as far as suspicion is concerned as long as you’re making some kind of contributions. If you are checking in occasionally and joining the conversation then it doesn’t really matter much.

That said, it is a very common tell by newer players that when they are are evil and accused they fail to mount a defense of any kind and just accept it despite the fact that in an asymmetric knowledge games just because one person knows you are evil doesn’t mean everyone knows it.

Another aspect in these games is that good generally wants there to be a decent amount of table talk happening so good players with some level of knowledge can try and get that information out without being too obvious.

@Lodgium how do you think we should manage sidebars? Players can pm with you on the chain and with an in-thread notice that a sidebar is happening?

Yes, that seems like the a good way to handle it. I have updated the initial post with a bit at the end about sidebars.

Given that this is generating a bit of interest, I’ll go ahead and give it another day for people to trickle in before I finalize the setup.

I am going to setup the game in one hour, in case there are any last minute arrivals or departures.

Night 1 Has begun! Private information will be sent via pm in short order.

Day 1 Dawns, and the town square looks like this:

For purposes of adjacency and seating, that is the seating order. Note that the top and bottom are also considered adjacent (it’s more of a town circle, really) so @Juan_Raigada and @scottagibson are sitting next to each other.

This is a 10 player game, so the unmodified setup is:

Although certain roles can mess with these counts, if they are in play.

The game has begun!

As a help-the-moderator thing, everyone should reply to their PM to help Lodgium manage the PM’s easier.

The sun has risen, but I have yet to wake. Was up late!

Does anyone have any first round info they want to share?

So, to be clear (in case there is any confusion): Night 1 is completed. Everyone who gets information or otherwise acts on the first night has acted (if there’s a poisoner, they poisoned someone, chef, investigator, washerwoman, librarian all got their starting info, and so on). It is now Day 1, so people can discuss things either openly or in sidebars (remember to post in thread who you’re conversing with if you’re having a sidebar).

(If you want to check who gets to do/know things on night one, there’s a picture up in the first post)

Does anyone have any first round info they want to share?

Someone must. Maybe they don’t want to share, i guess.