After a hundred billion years, I finally cut the cord to my mouse...

…and it is GLORIOUS! I’d worn down the nylon wrapping to shreds, and wiring was starting to protrude through the rubber. That was my Logitech G502. It served me well for countless years, but had started to have significant tracking issues. I moved over to the Lightspeed G502 and I didn’t lose any tracking sensitivity or speed like I was afraid might happen. It’s soooo wonderful!

Congrats! I don’t think I’ve used a corded mouse since…2004? Maybe before. I can’t even remember.

That’s about when I cut the cord to cable lol.

I get irrationally irritated by things like lag in inputs, and wireless mice occasionally being jittery or lagging drive me up a wall, so I will never give up my corded mice.

I tried a wireless mouse, and I hated it, due to lag and always having to worry about batteries. I went back to wired even though it cost more.

You’ll have the double click issue. I hope you saved your receipts.

I get irrationally irritated by things like lag in inputs, and wireless mice occasionally being jittery or lagging drive me up a wall, so I will never give up my corded mice.

When wireless tech is as reliable as wired tech, I’ll switch. Mind you, I think it’s unlikely that’ll ever happen, but one lives in hope.

The g502 has been/was fast enough for me—shame about the constant button defects.

I tried a wireless mouse, and I hated it, due to lag and always having to worry about batteries. I went back to wired even though it cost more.

But did you all try a lightspeed mouse? I am insanely sensitive to lag, and it’s been as good as my last mouse. Actually, it’s better than my last mouse. The battery isn’t a concern. I just plug it into my keyboard to charge when it gets low, and I can use it as a wired peripheral at that time as well. 60 hours seems pretty generous to me.

I just use a bog-standard Microsoft bluetooth mouse, if there’s any lag to it then a) I can’t detect it and b) I am beyond caring at this point. My previous Logitech USB mouse had a battery that lasted for well over 6 months, and that was using it daily. This MS mouse isn’t quite as good, about every 3-4 months, but that’s barely noticeable.

The only downside to a wireless mouse is when you occasionally reach across for something, whack the mouse with your hand, and it flies off the desk and ends up under the sofa. At least when it’s leashed you can’t do that!

I notice the lag with normal BT with both Xbox One controllers and mice. I don’t notice it when I hook up with the proprietary 2.4GHz high refresh Logitech Unifying or MS receiver.

I just recently upgraded from a G700, which while technically wireless was mostly garbage at it so I just kept it wired.

I bought a Orochi v2 as a travel mouse but it’s so great in comparison I just use it full time. No lag and most surprisingly I really like a smaller, lighter mouse. The G700 feels like I am pushing a brick in comparison. Plus all my teflon pads or whatever were starting to wear off.

Had it for months now and the single AA battery it uses is still working.

I have and love the MX Master 3. No lag and no connectivity issues, and I can quickly switch back and forth between my personal computer and my work laptop. I only need to recharge the battery about once a month. Great mouse.

You’ll have the double click issue. I hope you saved your receipts.

What issue is this? I’ve had no problem double clicking so far.

It likely will develop sooner or later. Of course you haven’t had it “so far” the mouse is brand new.

Left mouse button will develop a single-click-turns-into-double-click. I’ve had it with 3 different G502 mice. Both non-Hero and Hero models.

One person’s guess as to why it happens: 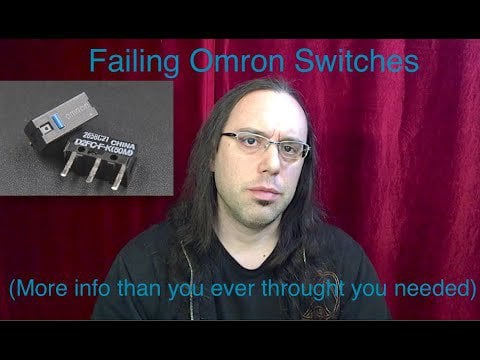 r/LogitechG - Logitech and other mouse companies are using switches rated for...

Google “double click” and G502. It’s why I don’t want to buy the super expensive wireless version (yes, it happens with both corded and cordless) and also because the wireless charging pad isn’t sold to Canada for some strange (regulatory?) reason.

At some point the mechanism starts randomly registering two clicks instead of one (resulting in an inadvertent double click).

Happened to me after about 3 years, but I really like the mouse so went out and bought the same model again!

Happened to me after about 3 years, but I really like the mouse so went out and bought the same model again!

Yes, the first one developed it after 3 years and the subsequent two (Hero models) after 6-9 months oddly. All wired models. So that’s why I’m not going “Logitech evil! Bad!” but instead “save your receipts/proof of purchase.”

I didn’t get a warranty replacement on the third mouse because due to increased customer fraud, Logitech support makes you jump through way more hoops to prove the defect. You have click on a test page and record a video to send it in now so I didn’t bother.

I had a trusty Logitech MX300 (only $15 after rebate) that worked great for 15 years, and then I went through several more—and more expensive—Logitech mice for a couple years after that. I never tried their really high end offerings after losing confidence in their durability, but I did go wireless when I got fed up with Logitech, and I love it!

I saw that some CSGO pros were using the Razer Viper Ultimate and went with that. It has performed flawlessly for over a year now, and it comes with a recharging dock, so you never have to worry about battery life. It may be on the pricey side, but I’ve spent less buying this mouse once than I did on the three Logitech mice that starting failing in months.