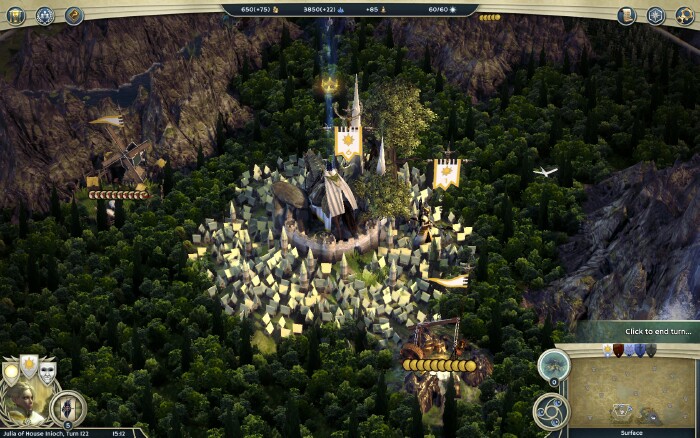 4X games certainly try to work around the seemingly inevitable late game tedium, usually, but I'm not convinced they succeed often, if at all.

Damn. That blows. This is precisely why I fell away from 4X games being my favorite genre. I just don't have time for that slog and I *DO* usually end up quitting in the middle. Another reason I play all of these games on small maps. The slog is lessened.

But most games don't force you to make that slog! Come back to 4X, Tyler!

It's a real problem in 4x games, the lack of an endgame, we'll have to see if upcoming projects, like at the gates, can really show us how it's done.

I am enjoying Age of Wonders 3, but the lack of any options besides crushing all opposition can be kind of a chore.

I 100% agree with the lack of endgame crippling this product. They must know it and hopefully will patch/dlc/expansion something in later on. This is always a problem, who even finishes a game of Civ? I normally just declare myself winner/loser halfway through and start again.

For now I play AOWIII on small maps in adventure mode with lots of AIs and no city founding. With 8 players fighting over a dozen cities I find the pacing suits the building and research trees. It's a move away from traditional 4X but maybe they could make some variation of that the default, (or y'know add an endgame). Even on a "normal" map (with city building on) you quickly have more gold/mana then you can be bothered using.

Odd, previous AoW's allowed for enemy AI to surrender, didn't they? I can't recall if they had alternate victory conditions or not.

I must admit to being surprised at this review. I agree with the lack of endgame but find the overall package is solid enough to keep me starting new games. And isn't that what its about, not the number of times the game feels I have completed to either won or lost but rather then number of times I come back to it?

Perhaps playing the campaign I'd get cranky at the mop up but I only play skirmishes.

If it was all down to the number of games played to completion Dominions would be my lowest scoring game ever. But its actually one of my highest.

Tom, did you feel Age of Wonders Shadow Magic also get tedious towards the end?
Because I played that game till this day and it never got tedious. There is no, I repeat no, other game that has the replayability value of that game. Even ten years after release there is an active community building maps.
So I'm curious whether this game is any different in that respect.

Maps are too big and too slow. This is something they understood in HoMM 1-3, that the game is supposed to be winnable in a reasonable amount of time. For some reason, in HoMM V+ and most other recent games of the same family, they think that fighting the same damn combat over and over and over again is fun.

Going into TBS I never expect to have wholistic narrative experience. It's always a playground to experiment with game mechanics. That's why it was unexpected to experience narrative in XCOM. Narrative in XCOM is one of the modern game design features(new to TBS genre) that I found unexpected and fascinating. It's rare when a game has overall direction and invests narrative meaning into most game mechanics. But having narrative also made XCOM more restrictive and linear.

So am I right to assume that AOW3 is a very well polished TBS without novel narrative elements?

Turn by turn it's pretty good. The problem is the strategic design of the game makes for tedium over a single map or scenario.

I have to say I've never been satisfied with the endgame of any 4x TBS game. It's always some variation on calling the game early, which you can always do yourself. It's the nature of conflict that there is always a tipping point where the issue is decided but nobody can say for sure it's decided.

I don't think it's worthy of a two star deduction. Let's be fair and say this is one of the better titles in the fantasy TBS genres, maybe even better than MoM.

I hate to tell you this, but the narrative you see in XCOM is at least 20 years old. :)

As for Age III, I think the narrative elements are very strong here. I sketched out maps, for Pete's sake. Maps! On paper! That's even bigger than naming your own troops or cities!

I haven't played Shadow Magic since it came out. But if there's no victory condition other than corner and pummeling the AI, then I would say it also lacks an endgame. Were there more stalemate breakers in Shadow Magic? Because that's also something missing for me in Age III. I love the upper tier units and more powerful spells, but I didn't feel that any of them served the purpose of breaking the inevitable stalemates when you're fighting another faction.

Damn.
Well instead of arguing whether it should be a four star review instead of a three star one, I'm going to just appreciate the detail in the review that let's me know this will still be great if I can put up with that endgame. That, and hope they patch in some token victory conditions...

For me there are subtle touches that make all the difference when comparing to old school X-COM.
Anyway, thanks for review. Definitely will try it out.

Oh, absolutely! Modoern XCOM is absolutely its own beast. But I do feel that narrative you're talking about was a fundamental part of the original X-com, and something Firaxis understood very well.

I hope you enjoy Age III. Come back and let us know what you think.

After seeing that they only had about half the number of races in the previous game I immediately preordered Warlock 2. I probably made a huge mistake.