So yeah, I have a lot to learn.

After each turn, open the log and read it. It can be tedious, but it is useful.

I didn’t know that existed, cool. Thanks!

I think a big part of what happened in that defeat was that my higher level Vanguard forces are weak against Arc damage.

The game autosaves every turn for about 20 turns in a row iirc.

If you really want to dig into it, load up your current game, and save it with a unique name, so you don’t mess up your progression, then load up the turn when the battle happened.

Film it perhaps? So we can dissect.

My awesome promethean dvar game had a suitably awesome ending. Just as they started to move towards my home cities, the Voidbringers appeared and offered a deal. I took it. Newly summoned Voidbringers were exactly what I needed to roll back the tide. I sold out the entire planet so I could be eaten last!

I just discovered the Doomsday victory is apparently disabled in this campaign scenario. Boo! I guess I’ll have to spread Celestian truth the old fashioned way.

If you really want to dig into it, load up your current game, and save it with a unique name, so you don’t mess up your progression, then load up the turn when the battle happened.

Film it perhaps? So we can dissect.

I finally finished off my first Empire game, capturing the Kirko capital on Turn 123. The end was a bit of a slog, but that’s probably more due to my not understanding how to play/win effectively and the passive AI on the easiest levels. 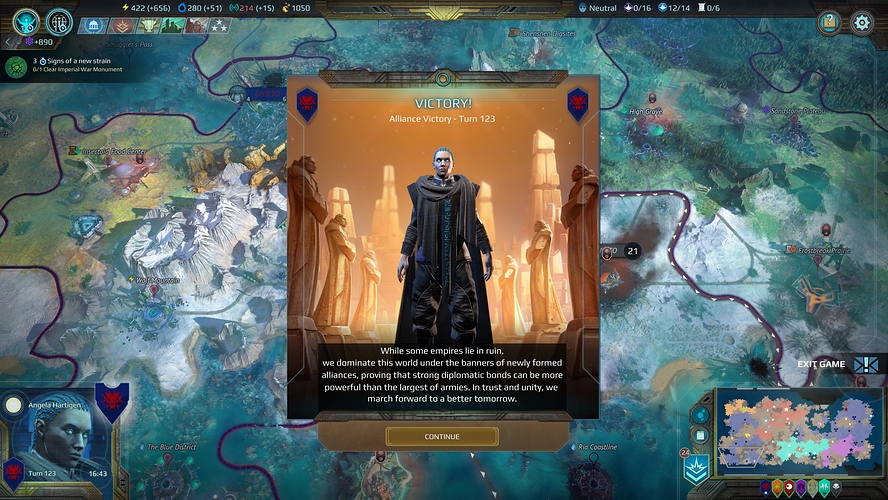 The Empire stuff is super cool, and a lot more stuff is starting to make sense now that I can see the results of the first game and how it’s impacted my Empire. At the end of the game, you get the following results tally that shows all the XP you got with the various factions and secret techs. About halfway through my game I started to wonder if some of the XP-bearing quests I was getting in the game were related to Empire progression, and it turns out they are. 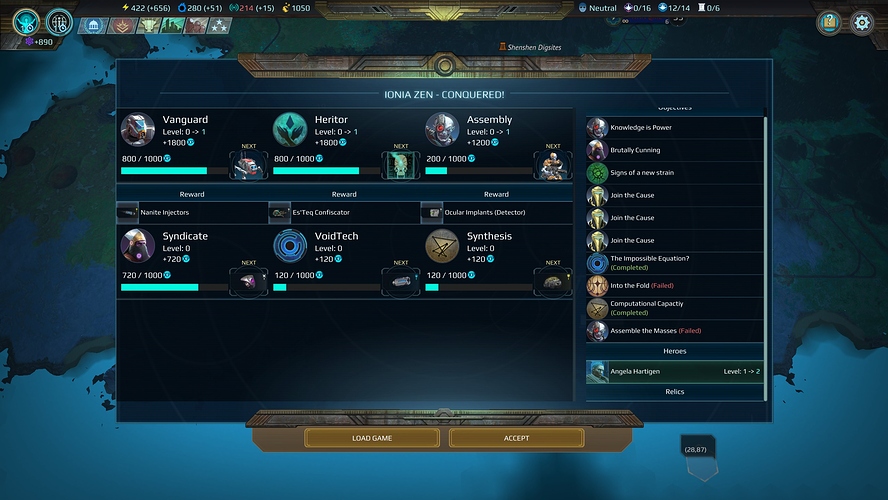 Lastly, Empire mode tracks your game’s main hero stats and results, and levels them up as well. Apparently these heroes can be recruitable heroes that show up in your subsequent games, or of course you can just use them as the main hero in future games as well. 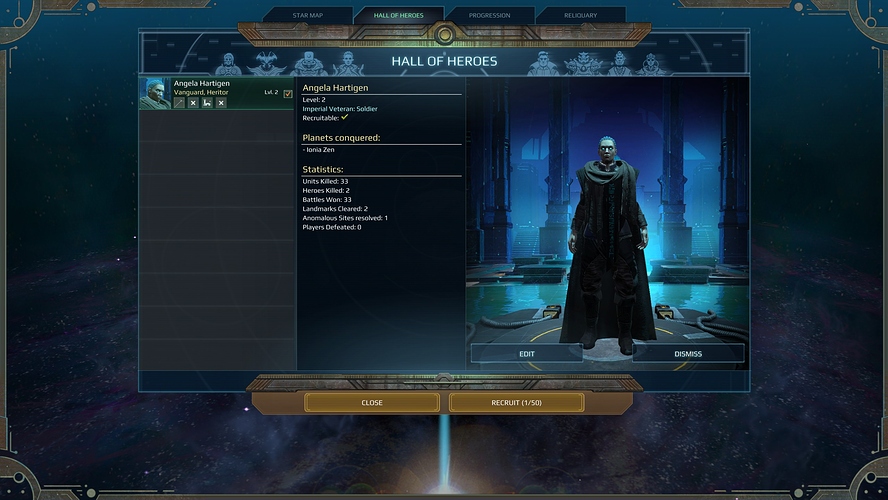 I’m sure all this stuff is written up in the description for Empire mode, but it took me playing through things to make more sense.

Is there a mod that lets us see our units’ locations more clearly? The “military” overlay map is so cluttered I can hardly pick out my units. Maybe I need to pick a more colorful shield than the default brownish-yellow? But what I’d really like is a simple map of the world with just my units on it – not much else. The “operations” map actually looks like this, but it doesn’t include my units. But the “military” map and the main map are so cluttered that I struggle to figure out what’s where.

I did a quick search in the Steam Workshop and didn’t see anything that fits the bill. Maybe there’s a “simple map” view mode that I’m missing in-game? If not, if anyone knows of a “simpler map mod,” please let me know! Thanks.

There are toggles iirc.

So - this is my second Empire game, where it just wont end the turn. This is 129 turns in, about 4 hours worth of game time, more or less like my first time.

Anyone else seeing this? Its slightly annoying.

When you launch the game, in the launcher, scroll down and look for “debug mode” - which will throw up a log as you play.

If there is an error, it should be logged.

I just played a second game tonight and about 70 turns in a lot of the command options vanished. Exiting the game and rebooting fixed it. I suppose you already tried that?

Thanks! Yes, so far so good. I played a second game tonight as the Kir’Ko, on a small world, with just 2 AI opponents. The game was much brisker. This time I developed faster than the AI did, and “easy” was definitely easy. Next game I’m going to push the difficulty up a bit.

Yeah, I did try restarting the client, and nothing Validated files as well…

So…eh…
Decided to do the Starking campaign - And reloaded a quicksave. It has the correct name and turn time, but…Its not my game, but another game where I am an amazon.

This is going really well.

And now the campaign I am playing can’t continue past turn 133. It just wont start the next turn.

After playing a couple of games now, I’m starting to wonder about the game design balance between time spent in the tactical game and time spent in the strategic game, and how the two work together. I want to be able to play some games at higher difficulties before judging, though. I’m curious to see how different it is when the AI is putting up more of a fight.

Mine felt like something like that. My glitch happened after having the game running uninterrupted for a number of hours.

I’ve had to abandon my two Galactic planets. Their savegames were unsalvageable and kept not ending my turn. Luckily, my campaign didn’t do that.

Its fairly frustrating to play a 4 hour game, and then have it just not be winnable.

Yeah, it’d be frustrating to invest that much time and have it go sideways on you like that.

I wonder if the issues we’ve seen are connected to the update/DLC.

AFAIk running in debug mode logs everything in the game, which is why i thought it could help.

I’ve never had the game hang like you describe.

I have had it take a long time to resolve some animations in tactical combat, so the game appeared to freeze, but 2 minutes later the animation had resolved.

That is thankfully very rare.

This is after 15 minutes waiting a few times. Since turn times normally are a few seconds , or at least under a minute, I am certain that isn’t it.

Finally had a chance to dip back in for an Oathbound game this weekend and my goodness. You really want to use the Precognition doctrine and get the hero ability that essentially does the same so all your units start with 2 stacks of precognition each battle. Two attacks just negated (along with whatever status effects they may have applied) is a total game changer, especially when most of the nastiest enemies in the game rely on status effect applications to be truly powerful. And even the ones who don’t hate missing twice.