It was gorgeous. The city construction options were original takes (at the time) and presented a neat “tall vs wide” option to growth (if you got cut off expanding to new territories, you could build more districts in existing cities. Both counted the same towards the happiness cap). It took a stab at some neat asymmetry nearly up to the level of Endless Space 2. Did I mention it’s still the most gorgeous 4X ever made?

But it mostly fell apart in practice. The race balance was laughable (one race was all but invincible to being attacked). The quest-line victory broken. The tactical combat time-consuming without being deep. Zero penalty to declaring wars to the death with the advantage going to the attacker instead of the defender. And the biggie: the game was simply a race to who hit tier 2 tech first because the jump in equipment quality was huge and you just steamrolled the planet at that point (picture the swordsman upgrade rush in Civ 6, only much worse and without war weariness or any defender advantages).

A lot of the same systems are in both games. Map divided into territories that can each have one new city built, or annexed for an income bonus. Influence is a separate resource used for both diplomacy and spells. The same Master of Magic army organization.

I haven’t dipped into Planetfall much, but I can already tell the unit customization options are a lot deeper (I think EL was just simple gear stat upgrades). And the race balance couldn’t possibly be as bad as EL.

I haven’t dipped into Planetfall much, but I can already tell the unit customization options are a lot deeper (I think EL was just simple gear stat upgrades). And the race balance couldn’t possibly be as bad as EL.

Most definitely. Amplitude games are full of cool ideas but I’ve never found them to be very satisfying games. I’ll be picking up Humankind with the appropriate expectations. I want to see a gorgeous map, UI, and encounter some really interesting design decisions that don’t amount to a very engaging strategy experience. :)

For Planetfall? Oh yeah, unit customization options are really impactul. Maybe too much so for some people (not me!) given that one of the more common complaints I’ve seen has been the mental tax in trying to track just how all the various mods enhance a unit’s capabilities.

Most definitely. Amplitude games are full of cool ideas but I’ve never found them to be very satisfying games. I’ll be picking up Humankind with the appropriate expectations. I want to see a gorgeous map, UI, and encounter some really interesting design decisions that don’t amount to a very engaging strategy experience. :)

I tried to get into Endless Space 2 simply because the assymetry between all the races sounded so cool.

But it was a mess of poorly explained mechanics and even less explained math. I picked up the mechanics of Endless Legend, but gave up figuring out ES2. Plus it made me realize how most of the EL appeal evaporated when you took away the colorful “Game of Thrones intro” map and replaced it with the void of space.

Yeah I have the same reaction to Amplitude games. Triumph is vastly more successful from a design perspective, no doubt.

I think the general consensus in my circle is that the Endless series has some great artists but it hasn’t ever really resulted in a game that was better than “ok”. They aren’t bad but they aren’t great. I think I might have gotten 40 hours out of one of them which is… pitiful compared to my EU4 or Total War Warhammer numbers.

Galactic Empire mode continues to perform: tonight I had a mission that required me to do Archeology which I normally ignore. So at an Anomaly Site, I had to fight this thing, and then after beating it, it joined me.

To wit, say hello to my large friend: 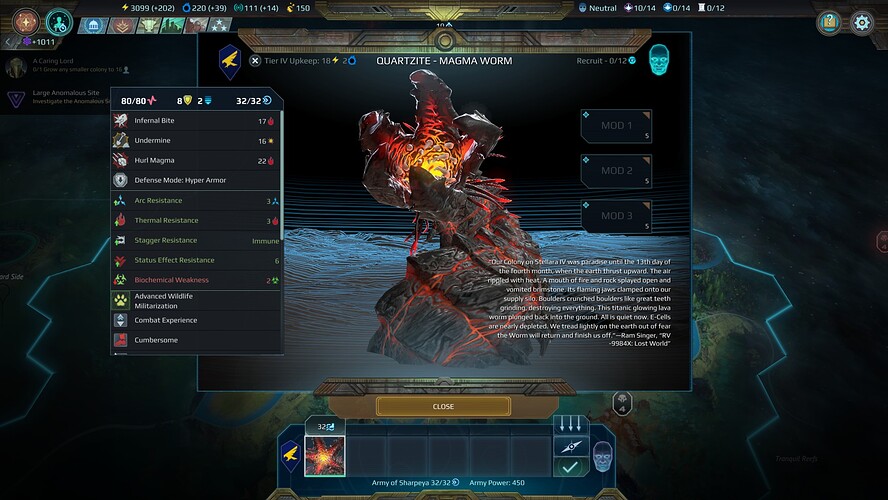 I was near the win when I got it, so I only managed to get Magma Worm into a few fights, but it did in fact crush all before it. It was beautiful.

On a different note, I learned tonight how to succeed at those Empire Quests where you need to “Add” a colony. It just says “absorb a colony or settlement” but it turns out it needs to be of a faction not already in your empire (or at least not your starting faction for this planet). You can buy the settlement with influence or absorb an enemy colony but it needs to add a new faction to your empire.

Ah hah! Good find. Localization or someone really screwed the pooch on that one.

Archaeology is awesome, man, you’re missing out! With the hero skills you get crazy science out of it in addition to great items, free tech, unique units as you saw, all kinds of stuff. I prioritize archaeology whenever I can.

Gave it a couple spins. I don’t think it’s a game for me. The big appeal is the tactical combat/mods and that part didn’t click with me.

So I went off to revist Fall from Heaven 2, which I haven’t played in 12 years. Discovered that it went through some iterations and now there’s a “Ashes of Erebus” version that adds and rebalances a ton of stuff, and is still being updated! If anyone ever fiddled with FfH2 back in the day or wanted to try a 4X focused on the strategic, give this one a shot.

Wonder why it requires you to set BTS to the original release instead of what currently ships in steam.

Hey guys I found the best tech in the game. This is going to have some…[sunglasses]…repercussions. 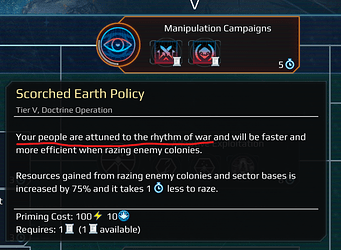 @Sharpe On the offchance you’re still monitoring this thread, what other settings do you recommend for a “first” game? Number of opponents, world size, world type, &c?

I started to folllow your suggestions yesterday while I was laid up with severe vaccine side effects and I played some of the tutorial and started a map, but got quickly confused with all the options and possibilities.

Also, the Purification Doodad, if I have the correct one, is one of the first row of techs, not tier 2.

Yes, the Purification Field is actually in the first tier (my memory was a bit vague) making it easy to get.

For starting setup, I recommend the default settings, simply so you don’t have to put in much effort figuring out the configuration - you can try different configurations as you progress. So, medium size map, 6 players, either pangea or continent (islands can be complicated), Game Intensity Relaxed, Opponent Level Easy for your first playthrough.

You can mess with pickup settings, archeology settings, voidbringer settings etc. as you gain experience but for now don’t change those (if you don’t see them, don’t worry for now - they are in the “Advanced Setup” options).

The basic idea is to pick fairly vanilla settings, a fairly generic starting faction (Vanguard), a Secret Tech with an easy-to-use mod (Promethean) and then learn as you go.

After the Tutorial you’ll probably want to move into the Practice Planet as it’s a 1v1 with almost everything set to easiest. It’s intended as a introduction to how a normal RMG Match goes and disables a bunch of the extra options that you might have if you picked up any of the DLC’s, as well as some disabled Empire Quests & Victory Conditions. For the rest it’s like Sharpe says, try using the more generic Factions and Secret Techs. Vanguard Promethean is a common one.

As this thread is specific to Tom’s AAR you might also want to check/bookmark this thread as it’s the General Discussion one which means more people might see your posts.

I love so very many things about this game.

This seems like a weird anti-synergy, right? Voidtech is all about weird timey-wimey machines and kinetic and laser attacks, none of which plays particularly nicely with the Amazon focus on biological units and biochem/laser attacks.

The Amazon flavor of the T2 Voidtech Echo Walker unit is friggin’ mounted, y’all. I can’t tell you how much stronger they are in practice, as that bonus extra movement covers the biggest weakness of the Echo Walker (getting into melee in the first place – there’s a reason melee infantry pretty much all have non-trivial secondary attacks).

Plus! They have a single-swing melee attack that hits slightly harder than the regular 3x Echo Walker attack. Bummer, right? Wrong! Slightly harder is more than good enough, because when you summon the clone he comes in with a single action point anyway. Plus they get the flanking bonus like the regular Amazon lancers do.

It is glorious, friends.

Now, they’re beyond useless on the water, so keep that in mind. Can’t hit fliers, slow as hell, and can’t use their clone ability. Bad times there. But hey, that’s what flying laser dinos are for.

Huh. Finally finished a Grail planet and the final Grail fight wasn’t hardly a thing, after beating back the nonstop freaking waves of Forgotten that weren’t at all interested in allowing this planet to join the Empire.

There’s a lack of consistency sometimes :(.

Hard to complain about but in my games, I tend to get too powerful for things like landmarks and anomalies to be annoying (and the grail is an anomalous site iirc)

Also, one thing, not at you @Adam_B but at everyone, is that if you let the game progress to the late game, e.g. turn 80 plus, which is best done by having a very large map and hard AI settings, then the AI will start building and modding t3 and t4 units, and will usually outnumber you and will pose a challenge.

I think the sweet spot would be to bring that t3 and 4 wave forwards, ut there are AI mods that have managed this, I think by adjusting the resources the AI gets.

Anyway, my current Pangaea map is on turn 104 and I am fightng a war on 3 fronts, because I was closing in on a domination victory and the remaining AI got angry about it.

It is possible I could lose because the bulk of mya rmy is far to the east, where the 4th AI just got crushed, but my capital and main provinces are largely undefended. I have some 15 stacks closing in on me from various directions, but strong militia defences and a small mobile army in the interior should be able to firefight, while my massive (8 stacks I think) army in the east just turns in and destroys my enemies, from right to left.

I just had an epic fight where I won a defence with 8 Bulwarks (with the autonom self repair module) and 3 ramjets and 1 Vanguard plane, a Baron and some other stuff, held of a Syndicate assault led by 2 Zeniths. TWO.

So I’m still finishing out an Empire campaign and up to the point where the planets can be utter beasts.

I just started one that was labelled as a Voidbringer Thrallworld which means the fauna/spawner attacks are just completely insane. I tried establishing colonies using the advance base as defense but even that was nowhere near enough. It’s like each colony would need a decent sized stack to defend it and I don’t see how the energy budget would work.

Have any of you folks defeated this setting? Tips, strategies?

I think by that point you should have some Uber heroes, and some powerful unlocked troops to purchase with renown.

And also be able to game the tactical combat somewhat:)