the convention of building seems to have lost its way. Not only in its repetitiousness, but in its sense that you always have to be building something, whether you need something particular or not. I realize that that is the moment my Civ VI games get abandoned, when I am rotating through empty building queues, not really having anything pressing to build. This really magnifies the empty stretches of the game.

I can totally relate to that. I played a lot of Civ VI hotseat with my wife, so at least we both had someone to fill in those gaps :)

I am in the beta test and still covered by the nda so I can’t say much. I will note that in the beta I have been impressed at how rapidly the game has improved. The game designer has been very responsive to criticism and has swiftly eliminated game problems. I enjoy the game and it is definitely one I play a lot. It reminds me in design philosophy of the old SPI game, Punic Wars, except that you can play any of 19 nations and the whole Mediterranean and the Near East is the combat ground, and, of course, endless more chrome. 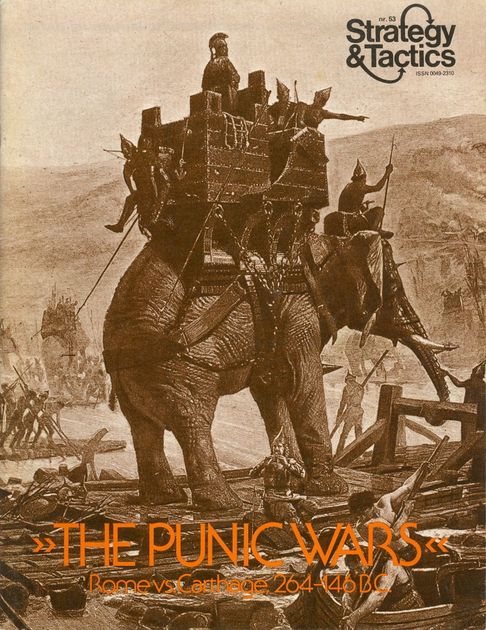 The Punic Wars appeared in Strategy & Tactics magazine #53, Nov-Dec 1975. It simulates the Roman-Carthage wars from 264-146BC. The game is a strategic simulation, each turn representing an entire year. Counters depict army, naval, and leader...

I am really excited by the gameplay mechanics they describe in the diaries, but then they post pictures of that map… 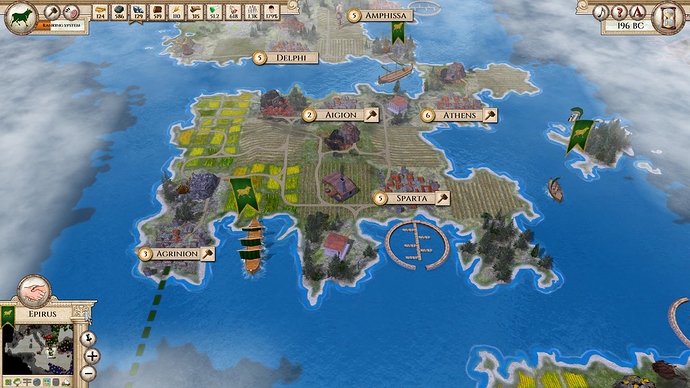 Is your complaint the accuracy or the graphics?

It is weird that both Athens and Agrinion are on the Peloponnese.

Dammnit, this is gonna be a day one purchase for me, isn’t it?

One of the things I found really interesting in the DasTactics random map video was the siege mechanism. He was talking about surrounding a city and starving it out, but it turns out that you simply move even just a single unit around the city, transferring ownership of all the neighboring tiles, and then keep your unit adjacent. A very small city (2?) capitulated right away, the size 4 capital took a couple turns longer and first dropped a size, but then capitulated.

First of all, I think this may result in a more realistic set of military options. It never struck me as right in Civ that you could hole up in your city and kill off attackers with bombardment and a ranged unit, with little concern for food and water. Nor did the surrounding unit mechanism seem right. I think Civ was always intended to force you to take the fight to your city tiles, thus some bonuses to some units fighting in city tiles. But that is not how the game really works… Looks to me as though in Aggressors, defenders have to battle for their cities, although I am pretty sure that they will be able to develop some level of mitigation for loss of resources.

I was also interested in how the cities and even a settler deserted without a fight, and how that matters more in this game. In Civ, units heal magically, given a little time. In EU, armies heal out of the manpower pool, but the manpower pool refills magically, given time. But in this game, the units heal out of population (and other resources, too) and so is truly consequential. So avoiding a battle can really be a plus, rather than just some abstract experience to “level up.”

Which reminds me, I also like the sound of the training options. Looks like these are at least as important as level ups, although unit accomplishments also come into play. Which strikes me as more realistic and interesting.

I’ve read some of the development diaries and I like the sound of them, and various comments online.

I am put off by abstracted combat though.

However if the rest of the game is okay, I can forgive that, e.g. endless space 2.

I don’t even mind the not so great graphics lol.

I’ll certainly give it a shot. He clearly has put a lot of thought into the design and seems to be doing enough different to not feel like yet another 4X.

New Let’s Play, also by DasTactic, but very interesting in that he plays at a level more difficult, and he really struggles to stay competitive… and the developer meanwhile offers a lot of commentary and advice.

Also, towards the end, he explores the UI options a bit.

Looks like this game drops tomorrow. I foolishly haven’t put enough time into the beta when I had the chance. I played a bit last night and enjoyed it. I don’t think I’ll get it on release though. Maybe 50% off Christmas sale? As a beta tester I have a 25% off coupon if someone wants to use it. Just PM me for it.

This game looks interesting to me (partly because I am overhyped about the Paradox game Imperator: Rome) but I have a few questions about it. Basically I am trying to figure out where it lies on the spectrum between Civilization and Europa Universalis.

Are settlers used to make new cities, or is the map filled with existing cities from factions outside the 20 playable ones? I have always disliked founding cities in 4x games, because I don’t like the extra micromanagement of nursing them yet feel pressured to do it fast otherwise the AI will outpace me.

Is the Roman Senate modeled at all? A glance at the Home Politics dev diary doesn’t seem to mention anything about it (unless I am an idiot, which might be the case).

You guys may have missed this one:

I rage uninstalled Agressors: Ancient Rome during a livestream. It wasn't pretty.
MiquelRamirez August 30, 2018, 5:04am #35

@strategywargamr @ChrisHornb @TroyGoodfellow @HistoricalGamer My issues were interface related (if it has in-depth diplomacy, I can't tell by the diplomacy screen) and that it felt like an uninspired awkward Civ clone (compared to Gladius, which feels like an inspired elegant Civ clone). But I only spent about three hours with it.
MrGrumpy August 30, 2018, 9:37am #36

I can’t tell from those two observations what’s wrong with the game other than the interface.

Personally I prefer economics to warfare, so while Gladius might be elegant, from the sound of it that game is purely tactics. This game sounds like there’s more choices to be had.

Are settlers used to make new cities, or is the map filled with existing cities from factions outside the 20 playable ones?

You can form new cities with either the settler unit or the nomad unit. Settler units can also do all manner of “builder” work, which central to the game. And since it can be problematic to obtain loyalty from conquered cities, especially when you besieged them, the settlers you build there will normally be best as builders – any city they settle will reflect the diminished loyalty of the city the settler came from. The nomads can settle, or they can fight.

As to the map: if you use the ancient Mediterranean map, it is historical. Some areas already have plenty of cities, while other areas have nothing. If you use a random map, that is totally customizable, so you can have a huge empty world to settle, or a crowded settled world teeming with cities, or anywhere in between.

Is the Roman Senate modeled at all?

No. The game seems to model governmental types and choices of the era, but it is never specific about the individual people in Rome or Carthage or Egypt. Not at all like EU:Rome.

I am trying to figure out where it lies on the spectrum between Civilization and Europa Universalis.

The developer says that he was influenced by the early Civ games, but I think that in truth he was motivated to fix (add depth) to areas where Civ has always been far too breezy. Everything is detailed from resource gathering to trade to unit strength in particular environments.

I am not seeing much in common with EU, other than the fact that the historical scenario starts with each group in their historical situation, fair or not. Unlike EU, the game is turn based. There are no mechanics to make the historical nations arise later in the game as they did in history. Technology is more realistic than gamey. And battles are… well, imagine if Civ allowed three military units per tile, with each unit having very specific environment-based strengths and weaknesses, and multiple attacks on the same unit were increasingly effective, and some kinds of units had good ability to withdraw if not winning…

You say that you dislike micro of new cities. I guess it depends upon why. Aggressors is not a continuous series of buildings in each city. But you do have to pay attention to the small things, or your goals will be undermined by disloyalty, rebellions, and inefficiencies. And you are constantly having to make tradeoffs among population, gold, happiness, mining, and knowledge acquisition. The interface provides the necessary information (I watched DasTactic play a 14 part video on the game, and he was often confused – but in part 13, he explored the interface and was very surprised to see the things he had previously overlooked.) A game of detailed tooltips, various map overlays, and apparently a manual that if printed would run 200 pages… My long-winded way of saying it is a rather micro game, but not a Civ city build queue game.

Wow thanks for the detailed writeup! That’s really useful info. Honestly it doesn’t sound like my thing, but I’ll keep an eye on it.

I can’t tell from those two observations what’s wrong with the game other than the interface.

Watching Tom fight the interface and UI–and realizing just how broken that was–made for a painful stream.

This looks intriguing, but so amateurish in execution that it’s a hard, hard pass for me. Maybe they can fix it in future patching or with community mods.

Watching Tom fight the interface and UI–and realizing just how broken that was–made for a painful stream.

Watch DasTactics videos, while the interface doesn’t look great, he didn’t seem to have any problems. At least in what I saw. The game looked quite good watching him play, albeit a little rough around the edges. Not saying Tom’s not right in his complaints, but it might not be that bad.