All good Nerdooks go to Magister: A Qt3 Threead Title

the sales are actually rather… meh at the moment.

If you haven’t already, get the game in the hands of YouTubers who feature such games, like SplatterCatGaming and Nookrium. I’m sure others here can recommend other YTers.

I think one of the issues is the same as before and before: Nerdook doesn’t manage to get his hardcore, “first day purchase fans” such as myself to know that he releases a new game :E

Lol come hang out with me on Twitter! I only have 600+ followers but I share footage of in-development games, some of which never see the light of day after they are scrapped for being NOT FUN ENOUGH~ ;) I also appear here from time to time :P

Not even you will lure me to the Twitter!
I started playing a bit. I was a little scared it was going to be wordy for the first… 30 seconds? Then nope, it’s just the usual “just… one more… click” Nerdookish action.
I must say in the little hour I spent with the game, I found the muscular approach much more FUN than the diplomatic one. I also deeply loved how the alcoholic trait had some social benefits at first, then I started noticing the drawbacks… What an accute simulation!

Really appreciate you for taking the time to try the game. Thank you!!

My favourite when watching others play is the Hallucination flaw, the first time it triggers in combat, the WTF reaction is just priceless.

Oh, man, I’m really enjoying this. Just when I thought I was done with “card battlers”, this one delivers the perfect bite-sized amount of personality, gameplay, and randomness. I’m only on my second playthrough, but I can tell the progression system is going to get its hooks into me. Curse you, @nerdook!

Just played the first 5 minutes of the game, and all I can say is… I’m going to need some Tomsplaining. (first question, if a card says it does 20 damage, why does it actually do more than that)

There can be a fair number of modifiers to damage, but most of them are things you do to modify the numbers. I think the Cornered bonus might be the only one that isn’t documented once you’ve read the tutorial tooltip about it. Perhaps a brief “How To Play” entry in the pause menu would have been helpful with stuff like this. Even just a single page like the help system in Rift Wizard.

But in a similar vein, I think one of the main problems with Magister – at least, I see it as a problem, but @nerdook might feel this is part of the design – is that you can’t see this screen: 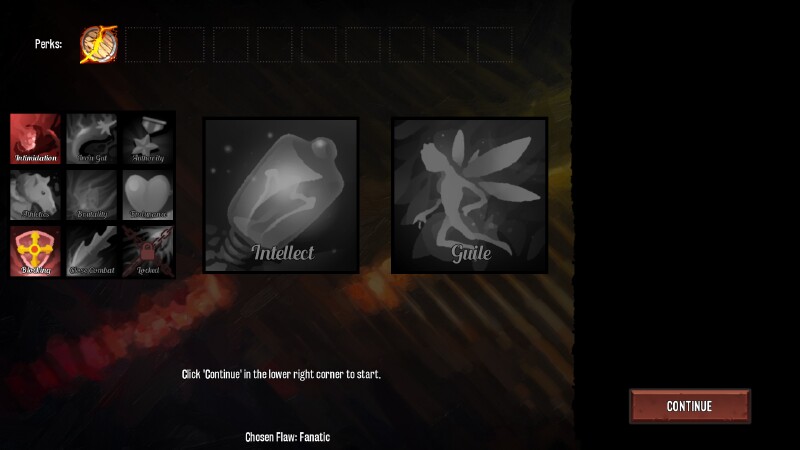 I mean, you can see it. There are specific times in the game when it pops up. But you can’t check it when you want to remind yourself how your character works and what’s the sum of your choices. I have no idea why Magister is so coy about such a fundamental part of its gameplay, so it strikes me as a bad UI decision. Why can I pore over clues, look at the investigation’s status in the journal, and freely examine my deck of cards, but I can’t look at the broader and arguably more important part of the game? Namely, how I’m playing, what I’m intending to do, what my strengths and weaknesses are as I work through the procedurally generated storyline? Why would that be locked up this way?

It’s such a weirdly frustrating omission that I have to think there’s some intentionality behind it.

It’s such a weirdly frustrating omission that I have to think there’s some intentionality behind it.

I, too, mentioned this (along with others) on the Steam forum, and it’s already on his list:

I just noticed the Switch version. Now I’m pondering where to pick my poison.

I’ll be adding access to the “Skills & Perks” screens in a future update, the main reason it’s not there yet is because… I don’t know, really. Likely a huge oversight on the part of my part self. Whoops. :D

Switch version? What? I may have to double-dip yet again.

I tried playing the Windows demo with a gamepad before choosing: the controls were quite nice for the most part, but too fiddly on the tactical map (in docked mode, I am guessing the game supports the touch interface).
The computer version is so darn intuitive. Dare I say, satisfying.
I am suffering from a big “deck games” fatigue, and somehow this game didn’t even strike me as one in the tactical battles (the deck building aspect is much more apparent in the diplomatic game, which might why I prefer beating sense into things instead of talking to them). Oh you Nerdook you.

That lovely moment when I use my authority to get passage, then proceeded to punch people by gratuitously being rude toward them. This got more freedom of action than many crpgs!

I have a question for the DOOK. I haven’t played this much and I could probably figure it out if I had, but in the meantime:

on some maps, some people are standing still and others are walking around in real time. So far, it seems like the walking-around ones are just there for flavor and I don’t actually have to click them. And the standing-still ones are the ones who are actually important. Is this universally true? I hope so, because it lets me know who’s important and also lets me not have to chase around moving people.

I just bought this (on GOG) because the DOOK seems worth supporting (gotta love a passionate dev that will interact with people here on Qt3), and because after @tomchick 's pretty-much-a-recommendation comment above, I just had to. ;)

I bought this last night from Steam for the same reasons @rhamorim stated.

Also, @nerdook , while I haz u hear, could you please update the DRM-free version of Monstar Slay0rz on Humble? I think it was missing a content update or patch or both or something.

99% of the time, the nameless wandering NPC villagers are unimportant, they even walk right off the map through the exit (and a new one is generated walking right back in again some time afterward). The exceptions:

@rhamorim annd @Charlatan : Thank you guys so much for the support, it really means a lot to me~ :D

Yeah I need to build a version and get that up to date eventually.

@tomchick thanks again for the feedback: I’ve updated the game to 1.0.0.4 with the ability to view perks/skills at any time just by holding down TAB. :D

The wandering villager loop became apparent to me when I saw one walk out the exit. Shortly a cat came back in, and it had non-cat things to say. I loved it. I wish I had fish bones to try befriending it and see what would have happened.