This is why the Steam Deck desperately needs better upscaling, because FSR1 is garbage. And it needs a variable refresh screen, because that saves battery and feels vastly better at low framerates.

They aren’t mutually exclusive. You can limit the GPU’s TDP, limit the max screen refresh to 40Hz, and have a VRR display so when it dips below 40fps it still plays smoothly.

Ah okay. Thanks. I was just thinking about it and now mystery solved. Sometimes I love the internet.

Me: “I guess I’ll play Vampire Survivors on my Steam Deck while I wait for 3D Mark to run on my PC.” 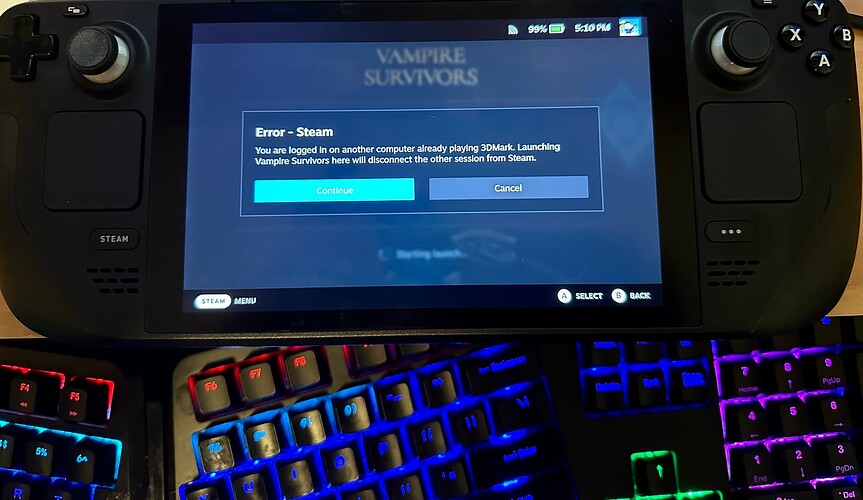 Put one of them in offline move maybe

Put one of them in offline move maybe

That’s the way to do it, unfortunately. I really hope that’s a better solution sometime in the future, it just doesn’t make sense for the Deck. I don’t know if that runs afoul with any agreements they might have with publishers, though.

Stop running 3D Mark on your other computer, duh!

Yeah, it’s not exactly a crisis. But it’s dumb. I shouldn’t be able to play the same title on two devices at once, but if I have a Steam Deck and I have a PC, I should be able to run different titles on them simultaneously wtihout an issue. I can run PC Game Pass titles while playing something on my Xbox…

Can you? The other day my girlfriend was playing Dreamlight Valley on the box and when I tried to launch a different game via xcloud on my phone she got a message that she was going to be logged out of her game until I stopped.

Day 1 for me and I put 5 hours into use of my new Steam Deck. I have loved it so far and my wife is very tolerant of me being back near her on the couch while gaming. So far, I’ve played just one game but I’m spending my work-from-home day loading more. I need more comfortable headphones. I did at least buy a longer charger cable and charger. Now it’s just about finding more titles I think will fit the experience well.

Man this platform is gonna be a game changer.

I know this sounds silly but what are you guys playing that works so well with a Steam Deck? I look at the top 90% games I play and I can’t really see a use case for it.

All games work well. You are playing at ~720p resolution and probably limited to 40FPS but most modern games run well at this level on medium to ultra graphic settings depending on the game.

What are you playing?

In any case, for me, anything that the input is good for (RTS not really), anything that doesn’t burn out my eyes trying to read text (many strategy games) and anything that isn’t a “waste”, AKA, why am I playing the gorgeous game on a tiny screen instead of my regular 1080p monitor.

It was a revelation how good games look on middle settings when I’m not looking at them on big screens a few centimeters from my face. Also, I’m gonna need glasses for close stuff, age is a bitch.

I know this sounds silly but what are you guys playing that works so well with a Steam Deck? I look at the top 90% games I play and I can’t really see a use case for it.

Initially I thought the same even when this was first delivered. But in your thought process ask yourself how many games have controller input schemes? Or how many were ported from a console platform? Or how many have so few controls that perhaps someone has mapped them to the myriad of buttons on the controller (there are a TON of community control templates for various games.) There is even a method for mouse/keyboard input.

All those things above make it inherently capable of a ton of Steam games right out of the gate. Lots of great RPGs, great action games, great scrollers, etc. I’m having a hard time thinking of games that do NOT work well, but apparently anything with a lot of small text doesn’t translate very well.

To EDIT: Last night I played Core Keeper, today I’m loading up Horizon: Zero Dawn, The Witcher 3, and a few others. All of these will work well. I hesitate to say this but I think this platform is everything your Steam backlog needs to happen. Things I neglected suddenly seem like a great idea to play because I was not inherently tied to the mouse/keyboard experience.

Yea, it’s the opposite for me, I hardly have any games I play regularly “on PC” that uses that control scheme. Total War franchise, Age of Empires franchise, Battletech and Shadowrun, and Endless (Legend, Space, ect) are my main PC gaming, with some Age of Wonders and Planetfall sprinkled in. I’d like to get into the Anno series but I hardly seem to find time to fit them in, and I don’t think all of them are on Steam. Stellaris or EU4 might in theory be fun, but I think the text would be eye killingly small.

There are maybe a handful of crossover games - stuff like Gauntlet or Necropolis that are PC/Console that might be fun, and there are some indie games I spend a little time with. For myself only, also having an OLED Switch knocks out a ton of overlap there, and I’d probably prefer Switch to Steam Deck for the great screen in most cases (I really didn’t like the handheld Switch until the OLED model). I do own hundreds of Steam games that I’ll get to one day!! and that probably work well on the Deck…

I think for me, the, “ask me again in a month,” is necessary. But this thread keeps growing so I think quite a few here are finding good purpose for it.

As for your titles, yep some would work but I think you nailed it, most of those are tied to clicking and information that might not translate well like smaller text. Still, if you get a chance to see one from someone that owns a Steam Deck it would be worth checking out.

Can you? The other day my girlfriend was playing Dreamlight Valley on the box and when I tried to launch a different game via xcloud on my phone she got a message that she was going to be logged out of her game until I stopped.

Yeah, it works for PC and Xbox simultaneous, but XCloud is considered Xbox as far as Xbox Live is concerned. You’re just logging onto a remote Xbox Series X on a server farm somewhere, but it’s still an Xbox. But you can do PC and XCloud simultaneously if you want, since that’s still PC and Xbox. But you can’t log onto 2 Xboxes at the same time with the same profile. You have to log out on one. It’s the same even if both Xboxen are in the same room.

Age of Wonders and Planetfall sprinkled in

Planetfall did launch on Console as well so playing it on the Steam Deck should be relatively seamless. You’d only run into some controller issues with the Paradox Launcher.

I have been playing strategy RPGs like Fell Seal, some Dragons Dogma, fallot New Vegas, and Blood Rally Sport and Road Redemption. So turn based rpgs, older 3rd/1st person action RPGs and quick hit driving games that are violent. Played Mad Max last night which combined two of my genres, ran great. I find myself combing my backlog more instead of looking for new stuff. Finally!

I find myself combing my backlog more instead of looking for new stuff. Finally!