Yeah, there are tons of guides.

I got a 256gb ssd for 20 bucks, and I bought the ifixit driver kit for 20 bucks. (I probably should have a nice small screwdriver anyway) 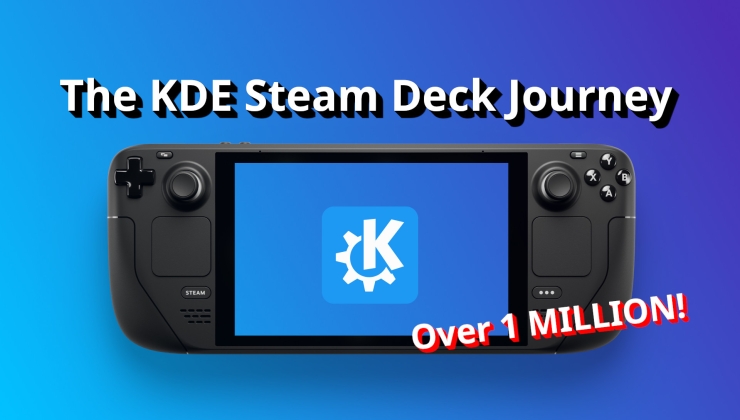 Recently at the Akademy 2022 conference, KDE's David Edmundson gave a talk on the Steam Deck and the ongoing work in KDE to improve things. We also get a note that Valve has shipped over a million Steam Deck units.

That’s not too shabby!

I remember all the “The Year of Linux!” articles and posts in the 1990s. Is it finally going to happen courtesy of the Steam Deck?

The year of the linux is ushered in by a product that leans heavily on a compatibility layer that lets it talk to windows programs.

Not sure if we have a game recommendation list going but I can provide my suggestions. As someone mentioned above I’ve been treating it like a backlog killer where possible. Games that were AAA 7/8 years ago and play fine now on the Deck.

Also still loving the Moonlight streaming. It’s jarring to play games directly through the Deck and hearing how loud the fan gets compared to streaming.

Happy to see this going strong. My bet was that this would indeed be a huge seller, mostly because it’s so hard to find this kind of form factor in a game-ready PC, plus given the success of the Switch.

Putting the Steamdeck UI on your desktop Steam is money as well. This is how the UI should have always been. So easy and slick!

I agree that the UI on th Deck in Gaming mode is great. On the other hand, the Store experience is definitely sub-par. Browsing games in an endless list, no way to open them in a second tab/window so when you are done looking at something interesing (or adding it to your cart), when you back up, you’re back at the top of the list. Ugh. Also, it seems like after I click Show Me More or whatever at the bottom of the list to keep going, after several times it just… stops loading the pics and info? Like it doesn’t have the memory for more? There’s still obviously the framework and placeholders for the game tiles, but they just stop loading. So yeah, sub-par. You’d think they Store experience on this thing would be bulletproof.

Hmmm, I haven’t done a lot of shopping on the Deck but the store side of things seemed fine to me. Categorized sections including “Runs great on Deck” being prominent. Sure, no tabs or second window or anything but I wouldn’t really expect that on a device like this. Maybe I just haven’t had to use the store enough to see the warts, I’ve only purchased 2-3 games on it via the Deck.

Yeah, there’s categories, including ‘Discounted’, and it takes you directly to a seemingly custom ‘Runs Great on Deck’ section (that I can’t seem to get to on my mobile web browser?). So that’s good. But just putting each category in a big list, that expands every time you reach the bottom, but also starts over from he top when you actually look at something and return, is terrible design, hence where the ability for a second window comes in. That, plus the problem where it just stops letting you load more. Eh. Sub-par.

Any good Demofest stuff that plays on the deck?

I’ve tried & wishlisted Spellbound Demonslayers, which was a fun Vampire Survivors copy. There was another one, Soulstone Survivors, but I found the visual effects got too crazy. Couldn’t see what I was doing after awhile.

Happy to see that! It’s enough for devs to take the deck seriously and try to support it :)

It’s taken awhile to get there with supply issues but it does seem like the demand exists and the deck is something that will endure as a product category. I do think we’ll see more studios explicitly supporting its hardware profile and usage patterns in the future. Valve discovered an untapped market.

I bought one more to support the product category than any burning desire to have one, and it showed up yesterday. “Eh”, I thought , “seems ok”. Then I downloaded Vampire Survivors, and I barely made it to work today!

A huge appeal of consoles vs PC for me, and it’s been apparent this is the way it’s been for some time, is the difference in “setting” where you are consuming this content. I think this accounts for much of the appeal of the Switch. The Steam Machine sorta-kinda worked in this regards - the living room PC - and i did enjoy it for the year or two the Alienware Alpha worked as a windows TV PC rather than simply a PC, but clearly that died on the vine. It’s almost like for PC only gamers, the Steam Deck is the first time they’ve experienced the joys of playing a PC game and not sitting in an ugly PC environment.

It’s kind of tied into my low level loathing of the “consumer desktop gaming PC” as a relic of the 1980s PC form factor and design, and certain inertia of Taiwanese supply chains.

It’s kind of tied into my low level loathing of the “consumer desktop gaming PC” as a relic of the 1980s PC form factor and design, and certain inertia of Taiwanese supply chains.

Well yes but we’re still a large market and with plenty of spending power. I have 20-something coworkers who all scramble any time there is a new GPU released, so it’s still a healthy market at that.

But I totally get what you’re saying about the PC space. It’s one of the reasons my wife was happy I’m back on the couch.

Then I downloaded Vampire Survivors, and I barely made it to work today!

Sounds like I need to look this one up!

Well yes but we’re still a large market and with plenty of spending power. I have 20-something coworkers who all scramble any time there is a new GPU released, so it’s still a healthy market at that.

That’s not really what i mean. It’s more of a 'if you build it, they will come" problem. People accept it because it’s just the way it’s always been, but it could just as easily be another way. Like, you can imagine a world where nothing has a box and all consumer goods in stores are locked up behind glass cabinets. Or a world where cardboard boxes aren’t the default used for shipping but some kind of reusable ‘shipping container’ or whatever. Certainly people did this in the past with things like milk containers, where everyone turned in their glass milk jug and got new ones, ect. What i dislike about the PC is that it’s just perpetuating 1980’s design. It’s not that people are consciously making a decision about it, but in a counterfactual where PC design becomes more ergonomic nobody would even know the difference, it would just be how the world is. The consumer PC is like a giant 1980’s console TV; it demands attention, and space dedicated to it, it creates certain demands on posture and aesthetics and ergonomics and interactivity. It doesn’t have to have been this way, but the people creating the PC supply chain haven’t changed in 30+ years, so people just live in that world regardless of possible alternatives.

Stuff like the Steam Deck completely upends the PC space because nobody else dared do it. You really see this, for example, in the professional camera space (Canon, Nikon, ect). They’re pretty much incapable of adapting to the modern computational photography world, and spend most of their time chasing each other around the office. Who cares about Asus vs Acer vs Gigabyte vs CoolerMaster vs whatever? They’re all the same type of company, following the leader and making the same stuff decade after decade.

Sounds like I need to look this one up!

Eventually you’ll reach a point where the deep runs are unplayable on the Deck… but you should still get a couple dozen hours out of it before then. Well worth the (now) five bucks.