Wow - I recognize their logo/page from long long ago. Always impressive to see guilds that have managed to endure that long.

Fellow SOLO player here as well. I bounced off of it as well. I liked the controls/combat for the genre but the structure of the game was just bleh. For a game that wanted me to quest grind my way to max level, they put zero effort into it. The same three or four boring low-effort quest templates repeated ad nauseum and then nothing to hide the pointless gear treadmill at the end.

That is exactly how I felt about SOLO. We must have similar taste in MMOs so it’s encouraging to see you giving New World the thumbs up!

It’s no longer a case of if, but when!

Yes indeed, this game is a buy once and no further charges apply. There is no monthly fee.

It’s no longer a case of if, but when!

Nice! We should all figure out an unofficial Qt3 server before launch so we can all end up in the same place. Are you in North America?

Nah UK here. I can always maintain a character on the NA server though. Assuming you can split characters between servers?

If I decide to bother, I’d be on NA East.

Though I’m notoriously lazy, I’d not be against a QT3 Company (or whatever they call them).

Nice! We should all figure out an unofficial Qt3 server before launch so we can all end up in the same place. Are you in North America?

Ok, you guys have done your damage. I just purchased it through Steam. Hope I get a beta key. I do hope we all agree on a server.

I’m really enjoying this and even though it’s annoying they are going to wipe everything before launch, it would be cool if there was some QT3 group for sure on a specific server.

If you buy it from Steam, you don’t need to wait for a key, just locate New Wold BETA in your library and install it.

Something I just noticed - shield is used only with a sword AFAIK but it does count towards your equip load even if you don’t use a sword. Stupid me kept it equipped and I was wondering how come I can’t wear any medium armor and keep myself within the light equip load bracket. :)

Ah - I didn’t realise there’s going to be a wipe. In that case I may as well hold off and let another pay day roll around before clicking buy.

@Misguided here is the tooltip from in-game when you hover over your equipment load number. 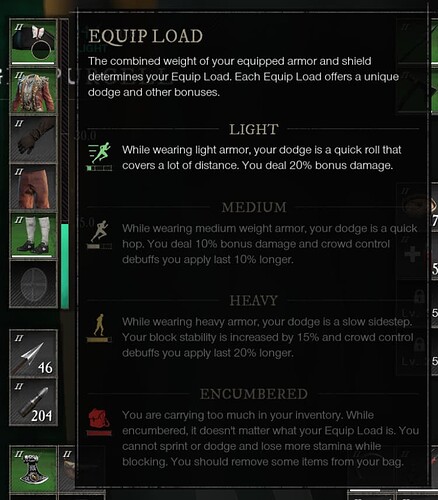 Anyone using a PS4 controller? I have mine working 90% well, and would love to see recommendations for community configs. Steam Link (which uses Big Picture), if it matters. My main beef is very limited menu control.

Alright, Ice Gaunt wins vs. Fire Staff all the way, for me. I think the fire staff would likely do better for me in group scenarios, but the gauntlet just clicked way way better for me and I found it a lot easier to use. Fire staff abilities were all awkward for me to land hits with, plus I prefer the mana regen on the ice gauntlet.

A good example of why I prefer the gauntlet is Blizzard (or whatever that AOE is called) vs Meteor. Meteor does more damage but you have to channel it, which is really awkward to do when not in a group. Mobs will rush you and knock you around, so it’s hard to apply much damage or to keep them in the radius. Blizzard on the other hand is fire and forget. You drop a blizzard in a similar sized AOE and it ticks away while you can do other things: run around, block, launch other attacks. It also slows, so it’s easier to keep guys in the blizzard.

While technically Meteor does noticeably more damage, in practice I like blizzard a lot more. If I were in a group and had a tanky character holding the mob in place, I might like the fire staff attacks more than I do. But for solo play, gauntlet all the way.

What are you going to pair with the gauntlet? Do you have access to the turret yet? Can I craft a low level one? More silly questions?

You get access to the turret in the first tier, although it’s in the Builder tree and I’ve gone with the other one for now. Easy enough to craft one, that’s how I got the one I’m using. Just need to find a bit of iron and a few other mats and craft away.

Definitely going to do that tonight, then. I really want to try the turret.

I remember fondly the female gnome rogue guild QT3 had years ago…fun running around with 15 other gnome rogues freaking everyone out.

I had a guild with some buddies we called Three Feet Under. Full of some real freaky gnomes and dwarves. Good times.

What are you guys pairing it with? I was initially thinking rapier but now I’m not so sure. Maybe a pure dex or str weapon?