we are always happy to have grown ups join

charlatan is grandfathered in, so to speak.

Awesome. Who is “we”? Did you take any cities in open beta?

We didnt have many people playing open beta. some of us played in closed and the rest are planning to only play at launch. we arent big, 15 or so currently planning to play, but do plan to be active in the large scale pvp battles regardless of whether we are the owners of the city/fort. and of course plan to do a lot of open world pvp as well. theres more info earlier in the thread from the closed beta timeframe.

An interesting article on the tech behind New World. One thing that just occurred to me is in the past, many MMO have struggled to scale quickly. I’m sure that Amazon will have other problems, but I’m not worried about them not having enough servers! 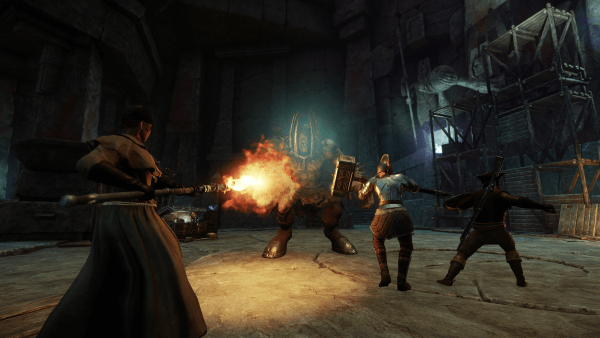 GamesBeat interviews New World game director Richard Lawrence and AWS' Eric Morales about bringing an MMO in for a landing.

The past couple MMOs I’ve seen launched have run on Azure as well. Very nice tech to have to rapidly scale, that’s for sure. No more having to build out datacenters or ramp up a lot of physical servers that may only be needed for the first month or two. That Outriders game, while not a MMO, also used Azure. I guess I should point out that they all still had problems at launch but yeah, lack of servers isn’t one fewer to worry about!

It’s nice they won’t have to worry about scaling up hardware. I was under the impression that the game world is not instanced though, just the dungeons. I also noticed login queues on Friday, which led me to believe there are population caps. So they’ll still have to create new (logical) servers if demand exceeds their expectations, which I’m guessing does not happen automatically. And merge low-population servers when demand falls away.

I’ve haven’t played it at all but did pre-order it. I’m not interested in PVP at least now.

The Wanderers will be playing on US East/Falias in the Marauders faction. You (and anyone here) are welcome to join us. We’re going to pick a “backup” US West server but personally I think if the East coast server is working we will mostly be there. If you’re interested PM me for a link to our Discord.

I’ll be on a NA West server at launch, not sure what one. I’m with you in I’m looking at PVE, not too interested in the PVP stuff.

Let’s just decide on a West unofficial meetup server. How does Yggdrasil sound? Unless there’s already something else in place that’s where I’ll plan to make a character barring server unavailability or something like that.

I’ll be on West Coast and trying to get my kid to play also. Any server would be good for me. Yggdrasil would be fine…unless the hive mind picks some other place.

If any of you wanting to play on West are interested in an easygoing PvX guild, I’m happy to recommend the folks I have been hanging with.

You can see their recruit thread on Reddit here: https://www.reddit.com/r/NewWorldCompanies/comments/pncjby/na_west_syndicate_laputa_souls_of_salem_100/

These folks are well organized and will not dictate how you play or how often (some are hardcore, others not). Very friendly. No tolerance for drama or toxicity.

Feel free to pm me with questions if you like.

The recruitment thread said that they’re on Laputa but that’s no longer a server from what I can tell. Any idea where they’re planning on going?

Yes. They have that figured out, in conjunction with a group of other syndicate guilds. The situation is still fluid though, and has already changed once in the last couple of days. I know for sure they will not be on Yggdrasil or any of the other servers like El Dorado and Lilliput that were available in alpha or beta

Please report back once that’s been settled, seems like a good place as any for West coasters to set up shop. :)

Since I’ll be a newbie. Any suggestions for the best place to get info. Character builds. Equipment etc. There seems to be a couple of different Wikis. I suppose I’ll checkout reddit. Anything bur Discourse

There are plenty of build guides on YoutTube, but honestly, my advice to you is play whatever weapons you find and think are interesting. You can freely respec until you hit level 20 so it’s a great time to pick a weapon that appeals to you and try it out. If you find a different weapon you can always respec (if necessary) to try it out.

The attributes screen shows you which weapons scale with which stats. So for instance, a bow scales with Dexterity, so the more points you put into Dex, the more damage you do. When you are allocating points there is a section on the right side that shows you how your damage will increase.

Some weapons scale off of 2 stats (for instance, Rapier scales off of Dex/Int). Any weapon that scales this way scales 90% from the primary stat and 65% from the secondary stat.

You can equip 2 weapons. Ideally you equip 2 weapons that are synergestic in that they scale off the same stat. IMHO it works well if one of them has a ranged ability. So for instance you could equip hatchet/great axe, which scale off str and str/dex. Hatchet has an ability that lets you throw it. So you could throw the hatchet to pull a mob, switch to great axe, and kill them.

But really, try a bunch of weapons out and see how they feel to you. All of them are pretty good.

I’ll be on east not west, but would definitely suggest not going Ygg if you want to avoid queues. it should be a popular name imo.

If you want to reserve your name, you must log into the EU servers at launch. This applies regardless of what servers you will eventually inhabit. EU goes live first. Names are global and must be unique. Details may be found here, starting with a post from one of NW’s Community Managers. 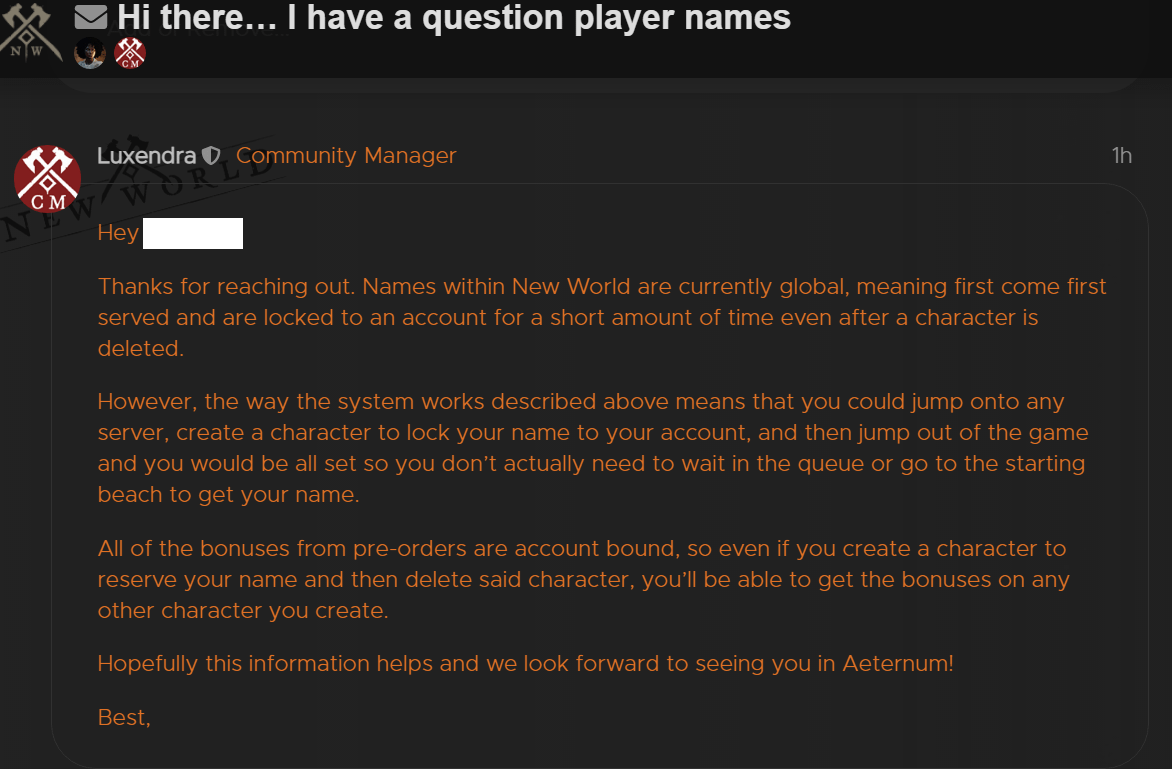 Jaw-dropping. 2021 and this is their plan? Wow. This includes Company names, so that should be fun.