About 5 years ago I listened to the entire full season of Mike Duncan’s excellent “Revolutions” podcast dealing with the French Revolution. And I kept noticing these things in the story of the revolution/counter revolution etc.:

That last bit is what really stood out to me. There just seemed to be all these points in the developing French Revolution that felt like branching decision paths in a videogame. And I found myself thinking "Man, that’d be a great game – to be someone of rising power at the time of the French Revolution, and trying to make your way through all of it, maybe doing good things for your fellow citizenry, maybe increasing your personal good fortune…but the whole while trying to not get your head cut off.

And so it was just a little bit later when I saw a kickstarter for Ambition: A Minuet in Power. Since then I’ve been watching the development of the game with great interest, and I’ll admit that for a few years there I figured it was never coming out.

But it is out now. And it’s a visual novel, which is a design decision that I’ll admit I didn’t expect from the original Kickstarter pitch.

But it’s also a game with a strategic element to it, too.

And I’ve sunk about 6 hours into it (both from playing the demo, and from the game proper, which released last week – no early access here, we’re 1.01 now) and I’m honestly really enjoying this. A lot.

And it does tick a lot of the boxes for what I kind of wanted a game like this to be like way back when I was listening to that podcast on the French Revolution.

I’ll talk about the gameplay and stuff in a new reply since this is getting long-winded already. But here’s a story trailer: 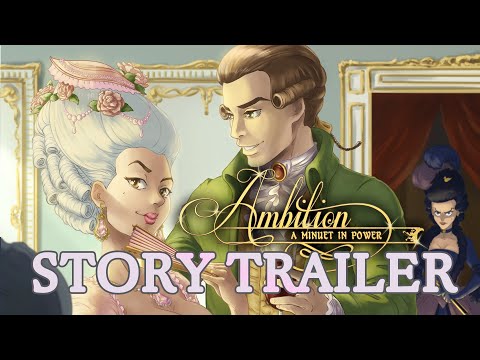 And the game has a free a demo that takes you through some of the early gameplay loops of the first hour prologue:

Ok, so the story of Ambition is that you play as Yvette Decaux. You’re a commoner of the Third Estate, but you’ve become betrothed to a nobleman of the First Estate. He’s very minor nobility, but has ambitions, and he’s at least influential enough to be part of the Grand Estates just called in 1789 by Louis XVI in Paris to try to sort out the country’s financial and social failings. Your betrothed has sent a carriage for you, to bring you to Paris.

And that’s where the game begins, in Paris in March of 1789. Events conspire early on to help you make some powerful friends and enemies alike. Your goal is to negotiate through the story (which has some pretty great twists, to be honest) while also moving the greater narrative along by playing a bit of a chess master/puppet master with the various factions in the game.

There are five factions to be concerned with in Ambition. The two major factions are The Crown and The Revolutionaries, who sit at opposite ends of the spectrum. Things between those two factions will eventually come to a head (ahem), but how they play out and how quickly is based on player actions.

In between them are three minor factions who play major roles: The Church, The Military, and The Bourgeoisie. Those three groups lean towards one of the two major factions, but can be shifted in their allegiances by actions and plots that take place throughout the game.

The core gameplay loop is fairly straightforward. Each day, you can either visit some place on the map of Paris and have an interaction there, or you can go to a party and have a series of character interactions, or you can just stay home and rest.

These interactions are basically visual novel style “pick a choice” type things, but the game does give you cues and clues as to how various answer choices may play out. Or at least how you might expect them to play out.

The interactions gain you relationship upgrades with individuals and/or all five factions. They also may get you pieces of gossip that can be sold to a rabble-rousing newspaper or traded for influence-peddling. Interactions can also earn you (or cost you) money. Which you need, because you have weekly rent and wages for your retinue to pay.

The interactions can also help you earn or lose the two big personal stats in the game: Credibility (more credibility is good, less credibility is bad) and Peril (more peril is bad, less peril is good.) Decisions in the game let you test against your current credibility for success or failure. Other decisions let you take on more peril to get some better reward (like juicier gossip about a faction).

You also have to pay attention to your wardrobe. Welcome to GTA Dress Shopping. Each dress in the game has a plus or minus to each of the five factions, and you HAVE to choose a dress to wear to the parties you attend all week. So, you’re laying out money for new dresses, choosing the right dress to wear to a party based on which faction is hosting it. You also have to watch the novelty of your wardrobe. Once you’ve worn the same dress more than a couple of times, you start to take credibility penalties for it. 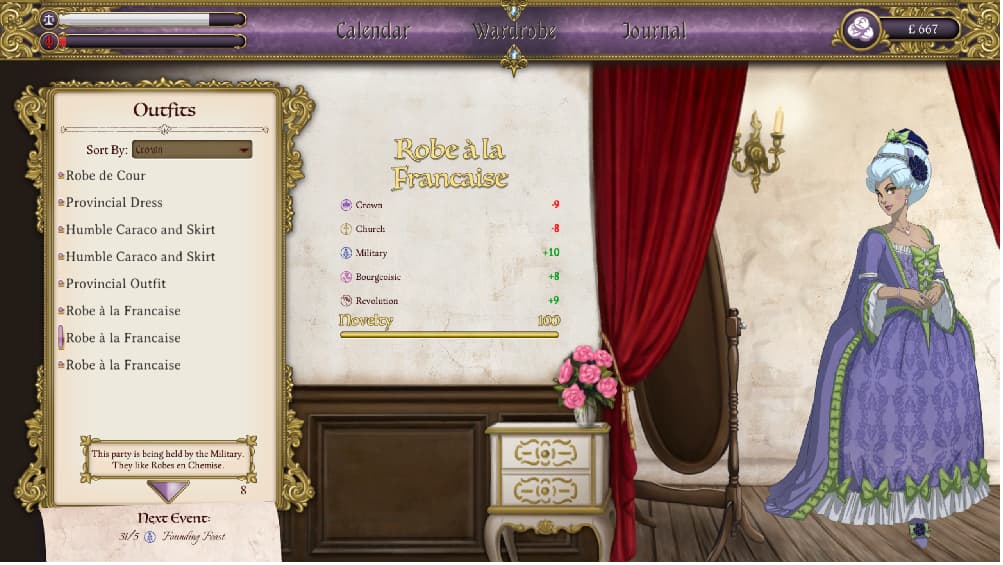 So…no spoilers. But the game is good, I think. At least after one play, that has me wanting to play again to see what other outcomes I can get.

One thing to say: Ambition: A Minuet in Power is not gonna hold your hand on the intricacies of the French Revolution. Don’t know why France is teetering on the edge of collapse? The game will hint at it, but it’s going to expect you to know that France has a catastrophic debt crisis and is suffering from a drought-related grain shortage that has created famine and near-famine issues. Don’t know what the three estates are? Not sure what the Grand Estates are? We’ll you’ll get some contextual hints as the story goes along, but maybe not much more than that.

And you know what? I think that’s a smart design decision. A strategic visual novel set in the French Revolution is already a pretty niche game product, right? So yeah, welcome to the deep end, hope you weren’t expecting too much historical hand-holding. Though with that said, it would be nice if there was an Ambition-opedia, too. There have been a couple of times when I’ve googled something to check the game vs history here and there.

With that said, if you listen to, say, the first three half-hour episodes of the Revolutions podcast on the French Revolution, you’re probably going to have most of the background info to really get a lot out of the game. And if you’re familiar with the entire French Revolution history, you’re going to get even more from it, I think. (Knowing things like Camille Desmoulins’ wife being arrested and guillotined just because she was his wife made me really shudder when I uncovered a plot a character I had been romancing in game was involved in, and that character helpfully told me that they had kept all my letters to them safely hidden. I’m thinking “Not only do I not want anything to do with your crazy scheme, but neither do I want people finding those goddamn letters and linking me to you when you get arrested.”)

The art in the game is very much visual novel standard. Meaning a weird mix of anime eyes and cartoony faces and such. But the music soundtrack is excellent, and the writing is quite good, and pulls you into the time period nicely.

It’s definitely not going to be everyone’s cup of joe. But for a French Revolution history nerd, this is a really enchanting experience.

I’m streaming this later this week and I’m quite excited about it. Visual novels aren’t a thing I usually truck with but this looks great.

I hesitate to participate in the thread as I haven’t played the game, nor intend to, but I have to word things because I like to — just like I had to when EA went WWI with Battlefield!
I’ll just be the killjoy at the party by saying I am really not fond of the designer’s premise on which he based his game: that decisions (which are affected by the knowledge of what happened, but that’s another everlasting can of historical games’ problems I’ll leave closed) can be sensible and can alter one’s destiny in such troubled times. If the documented modern revolutions of all kinds demonstrated something, it is that individuals have next to no say to what will happen to them and that only the wheel of fortune is spinning, eventually crushing a lot of them.
This is exacerbated by, if I am to trust the game’s title and the Steam store page, the goal of the game being about individual gain. This is both a strange take on the period - beyond the modern caricatural depiction of it, ie the bourgeoisie doing a coup d’état to get the aristocracy out of the picture —, but also something that potentially unbalance the design?
I am reminded of our @Rod_Humble’s STAVKA-OKH, which was about an educated officer trying to navigate an insane state while being subjected to its whims on all fronts. Excepting that game had a very clear agenda of what it was really trying to discuss. I’m not getting that feeling when reading about Ambition, as it seems more to be a period piece.
If I were to trust my sensibilty in life, I would like the game to be totally random based on its outcomes, which would kill the purpose of the game to begin with, which is why I don’t design games :O
I’m done, please don’t mind me. And please ignore this anyway as it’s most likely off the mark - who judges a game from its store page?!
Oh my, I shouldn’t ramble right before sleeping.