And you thought the Oregon Ducks football uniforms were bad

So now the University of Oregon has unveiled their new basketball court. And no, it doesn’t just look like some pieces of wood. All I’m seeing is a monochrome goatse.

lol “Deep in the Woods”

All I’m seeing is a monochrome goatse.

thanks for that mate. I like the Oregon football unis. That court is hideous though.

Bob Ross did the trees.

ZOMBIE Bob Ross did the trees.

Also, I didn’t even NOTICE the orange and brown paint splatter WERE trees until you posted…guess I was too busy laughing at the goat.se’ing of it all.

This is probably the first step of their introduction for the new Oregon mascot: The Woodland Shits. (Known colloquially as “Woody”)

I think kerzain is right on here. There’s no way this was accidental. I look forward to the upcoming news story revealing the source of the prank.

At first glance the court does look like the two teams were running around it pre-game and then the BLAMO! the super strength ex-lax spiked gatorade did its work.

At first glance, it does look like someone spilled bleach in the middle of the court.

Despite everything else terrible about this design, I have the hardest time with the TTATT under the O. I can guess the O stands for Oregon, but what does TTATT stand for?

I think kerzain is right on here. There’s no way this was accidental. I look forward to the upcoming news story revealing the source of the prank.

Do not underestimate a school that is capable of this… 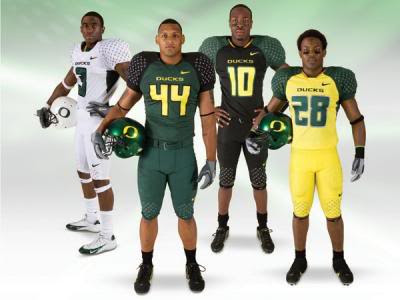 The Jaqua Center for Student Athletes, a few blocks away from the Knight Arena you guys are talking about, is a mind-boggling medley of horrible design concepts. Among other things, all entrance doors require nothing short of throwing your full body weight into pulling before they will budge, the lounge furniture near the main entrance appears to be incompatible with human anatomy and the public restroom stalls are separated by privacy glass instead of walls. Even worse, women using the second- and third-floor public restrooms have to put up with a huge, leering, creepy etching of Phil Knight.