The sequel to the most popular game on the iPhone, iPad and pretty much any other mobile device it’s on has finally been unveiled. And this time, the birds are turning their wrath on… other birds. The game – called “Angry Birds: Rio” - is due out this spring and will have 45 initial levels. But to get you pumped up, creator Rovio and 20th Century Fox have put together one heck of a trailer (below).

It’s more than just a game, though. The new title is a tie-in with Fox’s upcoming film “Rio,” from the makers of “Ice Age”. The app will show the original Angry Birds kidnapped and taken to the magical titular city of the film, where they eventually escape and attempt to save Blu and Jewel – the two stars of the flick.

This is getting out of hand.

It’s not Angry Birds the movie. It’s Rio the cellphone game. There’s also a Doodle Jump tie in with Universal’s Hop coming up, but calling that Doodle Jump the movie would be silly.

On the other hand, there IS an Angry Birds cartoon coming out…

Dang. I was hoping this was the sequel to BIRDEMIC

Holy shit, that trailer was awful. In a really, like, awful way.

Here’s some background info about Angry Birds’ media involvement from New York Post and Gamasutra. The mobile game developer Rovio (who have managed to hold onto the licencing rights of the game!) are planning to release the game on pretty much all platforms, an animated series, new games, card and board games and have released plush toys.

They have a genuine hit on their hands and as is normal in business are now striking while the touch screen is hot. Surely there’ll be toys, breakfast cereal, sheets, lunch boxes, boxer shorts and happy meals galore if the property doesn’t dry up before then.

That trailer was cute. This is going to be free, right?

IGN totally loved what they saw at a London event. No moneyhats involved. Promise. 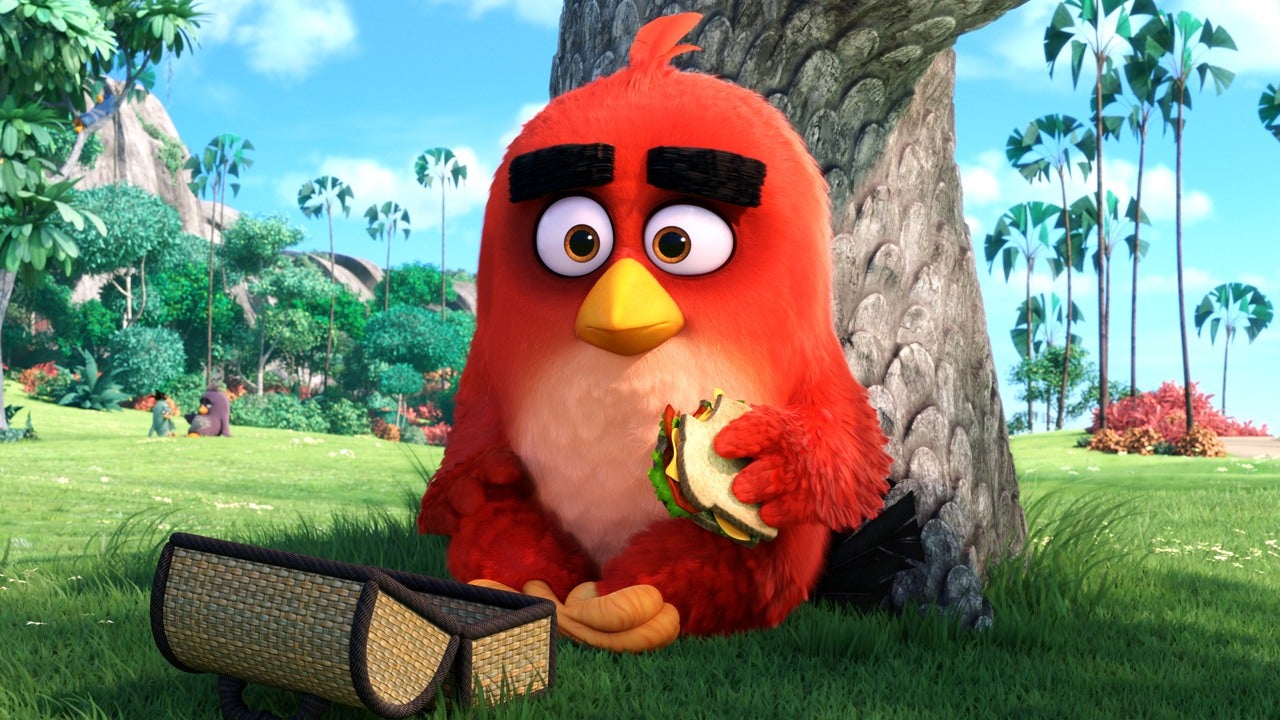 Preview of the Angry Birds movie, which features a star-studded voice cast and explains how the conflict between the birds and pigs began.

Red is the film’s lead character, voiced by Jason Sudeikis. And he’s angry. Really angry. Via flashbacks we witness Red lose his rag on multiple occasions which results in him being sent to court and sentenced to an anger management course where his teacher is…

Matilda, a white bird who is voiced by Maya Rudolph. Matilda also has anger issues in the past but channels them into a hippie and zen-like lifestyle, but you get the sense that said rage is still bubbling under the surface.

Another member of the class is Chuck, a slim, yellow bird who is quick in the game and even quicker in the movie. Somewhat Road Runner-esque and voiced by Josh Gad, he moves fast, talks fast, and delivered some of the footage’s funniest lines at a rate of knots.

Bomb is big, black and voiced by Danny McBride. If you know the game, you know that he frequently blows up, which the film puts down to his suffering from IED – Intermittant Explosions Disorder. Predictably, he lives in a bomb shelter.

And then there’s Mighty Eagle, who is voiced by Peter Dinklage, and whom we’ve been sworn to secrecy about.

The story kicks in proper when Bird Island receives its first visitors from the outside world, with a boat arriving filled with those iconic green pigs. Voiced by the likes of Bill Hader, Tony Hale and a bunch of brilliant comedians, the pigs are extremely dumb, and very funny.

I’d be amazed if they had any moneyhats left over after paying that cast. Jesus.

Wait wait wait. Back up.

This sounds… actually fun and now I want to see it. I kinda regret clicking on this thread now.

$43 million so far without China, South Korea, or the US.

Grossing $43 million, the film slingshotted straight to No. 1 in 37 markets altogether and set a record May opening for an original animated film.

Let’s bookmark this for the future:

The "Angry Birds" video game has been an object of obsession for celebrities, public intellectuals and government officials.

The marketing push, including promotional partnerships and the studio’s own spending, has reached an estimated $400 million, making it the biggest-ever campaign for an animated Sony movie, according to executives at the company.

$400 million in marketing. Production was $73 million.

Let’s bookmark this for the future:

$400 million in marketing. Production was $73 million.

From the movie studio always complaining about profits being down. I love the cast, have no desire to see it in theatre, will enjoy watching it on Netflix at home. I wonder how much Sony paid for the license to make the movie. I bet that was a huge chunk of change too.