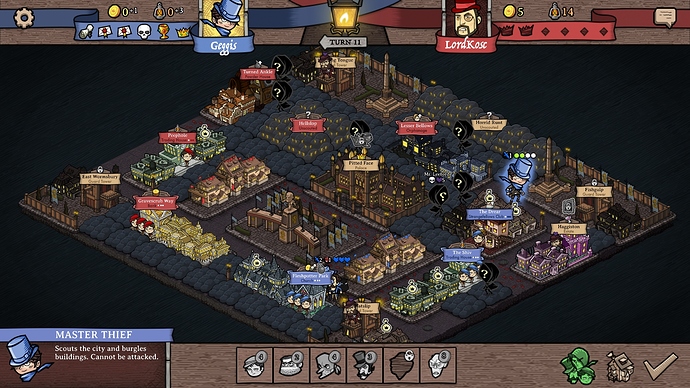 Can’t believe that the first assassination target spawned on the same patch twice, the second time blocking my gang in! He spent three turns hitting that dude for no money. 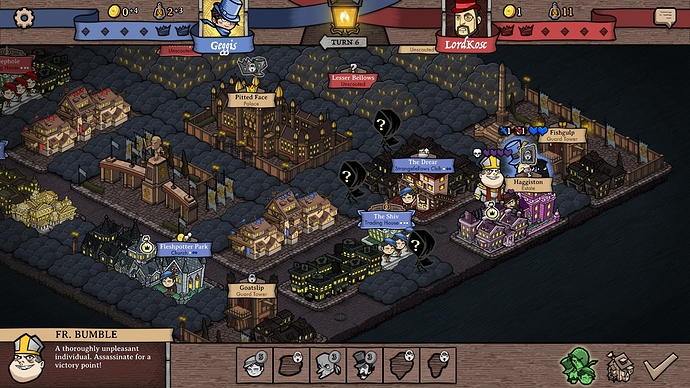 That was a horrible round, I had no idea wtf I was trying to do. :D

Close game! You owned most of the map! 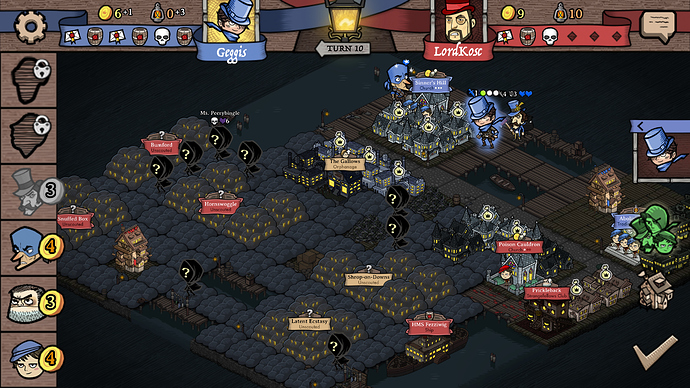 I thought you were going to snag that second bribe and put me on the backfoot.

And I’d researched so little: 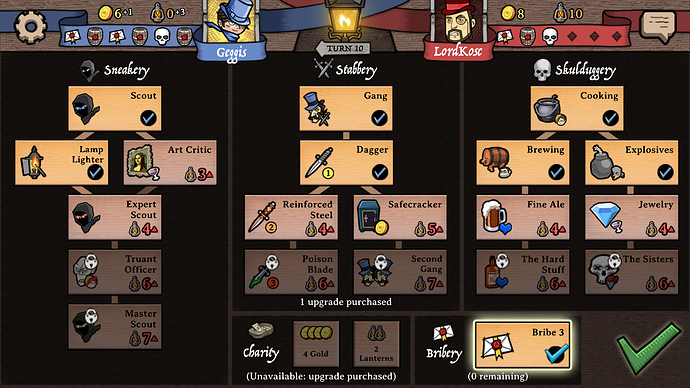 I finally beat the campaign! It only took me nine months! (I mean, I didn’t play it for most of that time. Only took me a few days once I actually started playing it again).

Congrats, its a fun campaign and really does a decent job of teaching you the game to be ready for some VS games.

Maybe you should play it again kosc! :P

Back in the top 5 , still enjoying this game 2+ years later.

I’ll never pass Veen, as for every win against him I probably have 3 losses, lol.

I quit out of frustration. Some of the maps are incredibly unfair – make the one right move at the right time, and no amount of previous strategizing will help, nor can you make a comeback. If I could rule out certain maps, I’d still be playing, but alas that’s not the case.

Also, even on the good maps, the tech tree is very limited, in that there are only a few viable strategies. Once you have two players who know the effective strategies, I found that map generation and luck determined the winner more often than not.

Worst of all, I don’t know how I’d fix it. This game requires heavy statistical analysis to find other ways to tip the balance and make decisions more interesting. Imagine we had chess, but there was something just a little bit off… like, we were missing knights and bishops, and had no idea what to do to push the game in a direction that made it optimal. That’s how I feel about this game.

EDIT: I guess I don’t have the makings of a board game designer. I don’t know how they do it. With computer strategy games, you can just throw in a whole bunch of fluff and decisions that don’t entirely matter. This isn’t the case when you’ve reduced a game to its bare essential mechanics and made it competitive, which is what board games do (and why this is a ‘digital boardgame’).

Once you have two players who know the effective strategies, I found that map generation and luck determined the winner more often than not.

That may be true for people at similar skill levels, but if you have someone who is more skilled than another player they will win in this game more often than not (I’m pretty sure).

If I could rule out certain maps

What maps do you take issue with?

My main beef is with the palace map, where the game becomes a race for the jewels rather than a strategy game. As a specifically selected game mode for variety, it could be fine, but as a map you can get randomly it’s very annoying. My second least favorite is the wharf, where again it’s a race to the VPs and the impact of luck is maximized since there’s no time to develop. I don’t have much of an opinion about the double wharf, since I stopped playing soon after it was released.

Sorry @Bluddy, been meaning to respond to your posts (properly) but just been busy. Soon!

@lordkosc gg, I think I needed to deal with your bank earlier! :-) If you want another game, ping me an invite. Are you still fancying some Chaos Reborn as well?

Finally got the time and head space to give you a good response!

I will say, if you lose too much ground in Antihero, it is hard to make a comeback, but that’s true of any game. There are plenty of tools here to foil your opponent’s plans though. The key thing for me is gauging what kind of strategic advantage they may have based on the buildings they are close to and ensuring they can’t leverage that while juggling my own economy to score VPs faster.

Map generation and henchmen spawns can make some of these hard to reach but it’s rare I feel that any map is so lopsided that I don’t stand a chance. When I get a rough map, I see it as a challenge to turn the tables and try some unexpected strategies (like taking long routes, gang ‘truant officers’, buff thugs, hoarding lanterns for flexibility, scout and trap, going all masks on masquerade). It’s really important you scout so you know where to hit when the time is right, and charity is so important to make up for any resource shortfall in a given turn. Often it’s more about forcing the other player to do something undesirable

Also, even on the good maps, the tech tree is very limited, in that there are only a few viable strategies.

Ultimately there are only a few different types of VPs, so bribes, blackmail and assassinations, then there’s map specific ones, so how you get at those is often down to numerous variables: map gen, henchmen/contract spawns, whether you nab coins or lanterns, what buildings and tech your opponent prioritises, what parts of the map they expose so you don’t throw your gang away. For me, it’s a game about adapting and eking out advantages wherever possible. Your options per turn are limited but it’s weighing them and their longer term repercussions (so thinking a turn or two ahead) that I find interesting.

My main beef is with the palace map, where the game becomes a race for the jewels rather than a strategy game.

I forgot to say, that race is the strategy game, and it applies to all the other VPs too.

Your mission is to beat @lordkosc’s played time.