Any good TBS or RPGs available for android mobile phones?

I was never really into mobile gaming but I recently got access to a Samsung A5 and since I’ll be spending a lot of time in the hospitals in the next 2-3 weeks I thought it would be a good idea to kill some time with a slow paced game that has some depth to it. Ideally I’d like to play something like Might and Magic X or a turn based strategy with easily clickable (fingerable?) characters/objects. The phone’s screen is big but not that big.

Problem is, I know next to nothing about games that are available for cellphones. I tried googling a bit but it’s hard to tell at a glance if the game has what I’m looking for, and the reviews seem to be aimed more at the mobile crowd, so the stuff I did find wasn’t very helpful to me.

Tell me about your first time: was it with Wizardry II or Ultima IV, Dungeon Master or the original Might and Magic, one of the Gold Box games or maybe, if you’re really old-school, Akalabeth? Bard’s Tale III: Thief of Fate was my first, and, like...

The Quest looks great, thanks! I’ll see if it’s compatible with my device, those screens look like they’d be better suited for a tablet but you never know.

At least on iPhone there are two versions. One with better graphics. But the older one has a bunch of add ons too. I think is Quest Classic is the older one.

For TBS, I thought Through The Ages was a solid strategy game for a phone. Don’t play on my phone much, but it seemed pretty good.

Review: Through the Ages

Through the Ages has the most entertaining tutorial yet seen in mobile gaming. Designer Vlaada Chvatil gets appointed leader to guide you through your first few millennia. And he proves as able a comedian as he is a game designer.

I quite liked the Kingturn series. They are SRPGs, most similar to Battle For Wesnoth. There’s not much if any replayability and the graphics are… poor, but I remember the mechanics being very satisfying. For a less satisfying but graphically much more attractive game there’s also Braveland, in the same vein.

Kingturn RPG [appprice url="https://itunes.apple.com/us/app/id606226694?mt=8"] ain't a looker. That was my first reaction to the game, as I suspect it will be yours. But for fans of tactics style turn-based RPGs such as myself, pickings are slim on...

This is an IOS review but the whole series is available from the Play Store as well.

Polytopia is a pretty good 30 minute 4X game. Free with the option to buy additional tribes

For a long time it was only on Palm Pilots. A phone screen will be fine.

That’s even better! In any case, I have the game on my phone now - any recommendations regarding classes, skills? I was thinking of starting with a thief, but if it’s suboptimal I wouldn’t mind knowing now instead of 20-30h later :).

Haha, I can’t help, but I know that feeling!

XCOM on a phone is playable. Will eat your battery though. Elder Signs: Omens is probably my favourite android game.

The review does show one of the screens using the game’s portrait mode: 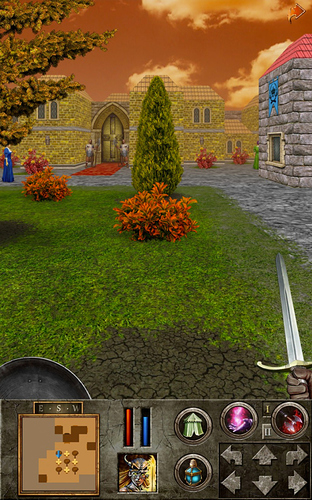 But yeah most games are going to be better on a tablet. :)

Sorry to hear about your hospital time, hope everything goes well. I suppose I’ll have a suggestion as soon as I charge my Galaxy. :)

I tried the game out for a bit and it’s actually quite comfortable to play on the phone. It also switches between landscape and portrait mode seamlessly which is great. Also, thank you for linking Pocket Tactics, I already found some interesting titles in the review section.

I like Pathfinder on the phone, but that is more of a board game.

At least on iPhone there are two versions. One with better graphics. But the older one has a bunch of add ons too. I think is Quest Classic is the older one.

Yeah I don’t think Android ever got the older games, just the ‘HD’ version where they confusingly named it ‘The Quest’, the same as the old games on iOS.

I can also endorse Polytopia. One of the very rare mobile games that I actually play these days, and I’m probably going to buy a tribe or two just to support the devs.

I tried the game out for a bit and it’s actually quite comfortable to play on the phone. It also switches between landscape and portrait mode seamlessly which is great. Also, thank you for linking Pocket Tactics, I already found some interesting titles in the review section.

In addition to Pocket Tactics, http://statelyplay.com/ does a lot of mobile strategy reviews.

Thanks! I’m slowly beginning to realize that there’s a whole new world of gaming out there and that there are a lot of ‘proper’ games available to play on mobile these days.