I’ve looked at the Azeron before as a potential Logitech G13 replacement. Good to know you like it. I have tiny little baby hands, so the adjustability is a big draw (I can’t comfortably reach some keys on a g13 or nostromo-type board).

Leftie using the mouse in a left hand. I still feel that we are the discriminated minority that no one talks about. Delete to jump and insert to reload.

Lefty who uses the mouse left-handed, and I’ve been doing it that way for so long I can’t go back. My brain plasticity is gone, and I can only proceed as I ever have. Worse, I use the numpad and nearby keys for movement, which leads to all kinds of problems. Almost every game requires a slightly different setup.

So many posts about alternate key binds or left-handed configurations begin with an apology, as if there’s a flaw in using the tools that way. I wish games would just let us bind anything to anything. Let me play how my brain wants me to, I’m begging you. (Especially you, Bethesda.)

Even the ones I saw on Amazon are sold by them, but they cost more.

Yes, that was the only way to buy one at the time. They had a backlog of orders, but it still only took about 2-3 weeks to deliver.

Do you use the thumb stick for movement?

I have tiny little baby hands, so the adjustability is a big draw (I can’t comfortably reach some keys on a g13 or nostromo-type board).

Yeah, you can adjust the length and spacing of the arm thingies. My hands are small-ish so I moved them in close.

The software is basic but it works fine. It’s very quick and straightforward to set up new profiles and key assignments.

For the analog thumbstick, you can adjust the offset to make the direction you push for forward, back, etc. feel natural. The thumbstick can work like a regular analog stick from a gamepad, or simulate WASD keyboard presses for games that don’t support controllers or can’t handle simultaneous input.

My main beef with the software is that I have to choose game profiles manually. The Z Engine software used to let me associate a profile with the game executable to that it would switch to the right profile automatically when I launched a game. I’d love to see that feature added.

Do you use the thumb stick for movement?

Yes. It’s an analog stick that feels much like the one in my XB1 gamepad.

For a lot of games, I can use it for analog movement like the left stick on a gamepad at the same time as I use the mouse for aiming/shooting/whatever. There are some games that freak out when I try to use an analog controller and mouse simultaneously, or don’t have gamepad support, so in those games the stick can simulate WASD keyboard controls. Analog + mouse works generally fine in most of the big games though.

The thumbstick can work like a regular analog stick from a gamepad, or simulate WASD keyboard

Man I’d really miss being able to do things like hack mouselook into games that don’t have it (by emulating a held-down rmb while a movement key is pressed).

Lack of profile auto-detection is a bummer

I’m predominantly left-handed but I do a few things with my right hand like use the mouse and use scissors. I have no idea why.

I’m apparently I’m the odd one here. I’m left handed and use the mouse with the left hand. In fact, when I was growing up I used the mouse so much on the left side that my parents would use their left hand to use the mouse when they wanted to use the family computer. HAHA!
I still used WASD to move etc.

Back in the old arcade days. I knew some left-handed arcade goers would play their fighting games cross-handed. I actually knew a couple of right-handed folks who did the same.

I know that someone has made an arcade stick that is capable of supporting cross-handed play, though these days, left-handed fighting game players tend to use hitboxes more.

Leftie with his left hand on the mouse here, and I never use left-handed options. Played the Rock Band Guitar with the left hand on the frets (and I never got why you would use your primary hand for the strum bar), and I don’t change the button layout or something like that. I shoot with the middle finger and I think that’s poetic.

Man I’d really miss being able to do things like hack mouselook into games that don’t have it (by emulating a held-down rmb while a movement key is pressed).

I may not be understanding exactly how that works. I don’t think the analog stick can emulate a mouse button press. The keys definitely can.

edit: Maybe that’s something reWASD can do? I’ve never tried using 3rd party software, but I’ve read that some people use reWASD as it apparently has more features than the software supplied by Azeron. 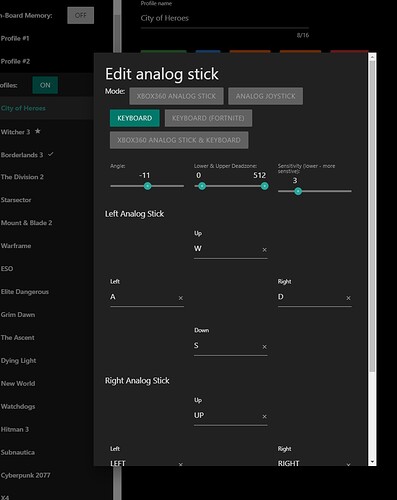 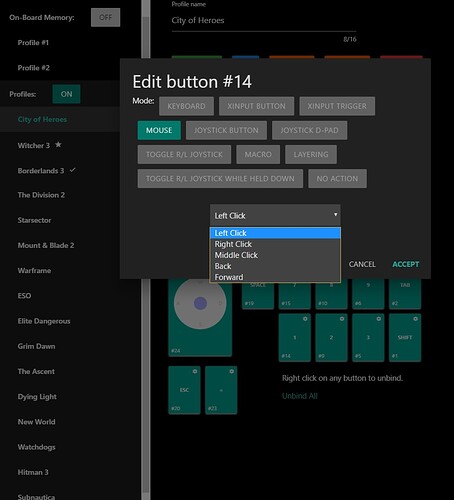 Left-handed but Right-handed gamer by adaptation.

The Wii remote was the worst controller to use as a lefty. I was used to controlling analog stick for movement with my left hand but I needed to use the shake now and move the analog with my right.

I think the N64 controller might have been better for lefties since you used the single analog stick with left hand. Movement in 3D was always more important than pressing buttons.

That’s a bit of a bummer. I’ve been using the g13 thumb stick for LMB for years. I find it to be low impact to hold the thumbtack in a direction for long periods, compared to other options. Sure I could figure a way around it. Appreciate the info

Also a lefty using a traditional right sided mouse. Guess I just used to it as a kid sharing a computer with my brother & not always wanting to switch sides? Especially after the ergonomic mice started to become popular, the way back was impractial and I just stuck with it.

Funnily enough I also play the guitar as a righty, but everything else I do with my left hand!

My wife is also a lefty who uses a right hand mouse. Ultimately the annoyance of having to get left handed micr, combined with having to switch settings every time using a shared computer, meant she learned that way in grade school.

Lefty who’s always used a mouse in the right hand. And it’s always felt normal. When I played softball I batted right handed though, so go figure.

Lefty who uses the mouse with his left hand in a right-handed way.