Anyone here ever cook meat with Broth or Oil in a Fondue set?

I’d like to surprise my parents and prepare a fun meal. They’re always making food for me and if I’m feeling well enough want to do that for them too, but make it really neat. So I was looking at some of these Swiss Christmas Fondue parties they have where they cook raw meat in broth or oil. They then have all these mayonnaise dips to either make sandwiches or just dab with the meat and eat. Anyone here done this before? If so how did it turn out for you?

First off note you need to use strong flavors to impart them meaningfully into the meat. A coq au vin style, which mixes red wine into the broth, is a good choice.

Is there any specific advice or experience that you are looking for? If needed I do have access to a Melting Pot recipe book that I’d be willing to share.

First off note you need to use strong flavors to impart them meaningfully into the meat. A coq au vin style, which mixes red wine into the broth, is a good choice.

Is there any specific advice or experience that you are looking for? If needed I do have access to a Melting Pot recipe book that I’d be willing to share.

Yes! I have many questions :)

Not Swiss, but Chinese style hot pot. This is fairly easy to do if you have access to an Asian supermarket. This article as Serious Eats does a good job of covering doing an Asian hot pot. They use a divided pot on a single burner. We’ve used two regular pot on two separate burners. It;s nice to have two different broths, one spicy and one no spicy.

Chinese hot pot is one of the ultimate communal dining experiences: Diners sit around a table, dipping prepared meats, seafood, and vegetables into simmering broths to quickly cook before eating. All that's required are a few key pieces of equipment...

This is what got me interested (article about Christmas dinners from around the world and they had this image for Switzerland): 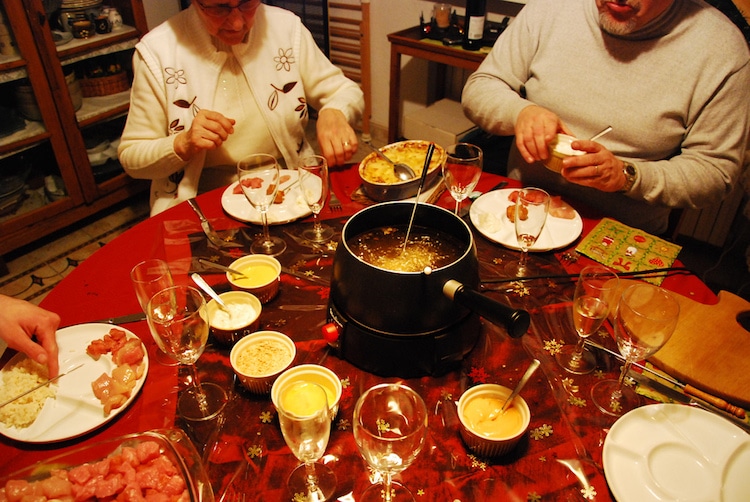 We do fondue once or twice each year. Recently, we’ve cut out the meat fondue because the cheese fondue is really where it’s at. Why? Well, 20 years ago, my friend stole the cheese fondue recipe from the most famous fondue restaurant in Geneva. It’s simple, but freaking delicious. Here you go: 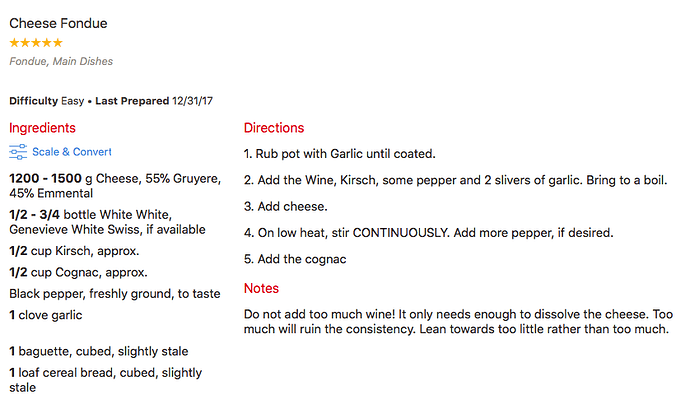 Swiss cheese is combined with wine, traditional Kirsch, and seasonings to make this tasty fondue, easily cooked in and served from a slow cooker.

Just in case you don’t have a fondue set.

We do a fondue dinner every few months – we start with a cheese fondue and then an hour or so later we do the meat. It’s sort of a marathon of a meal since you are basically cooking each bite separately in series, so these dinners are always on a Friday or Saturday night and we often have a movie going on in the background… not very social of us, but it’s relaxing.

We have an electric cooker, and yeah, the temperature can get weird. I don’t think it’s really a function of the temperature so much as state of the oil in the cooker. As the evening wears on the oil gets gooier as it absorbs some meat broth and it also evaporates off some of is lighter contents, so at the end of the evening it’s still just as hot but it cooks the meat a little differently.

I’d still recommend an electric pot. Using a candle or a can of sterno or whatever under the pot doesn’t deliver any more reliable heat really, and they can run out of fuel surprisingly quickly. It’s a little more romantic, maybe, but then the risk of burning alive during a date always is.

We’ve used both the oil and the broth methods and they can both be excellent, but our family prefers the less-healthy oil option: it seems to cook faster and we like the task of fried meat as opposed to boiled meat, usually. If you choose to go with broth, you need to spice the hell out of it as Craig mentioned.

You can do any number of different types of meat as long as the oil/broth is hot enough, even at the same time. You just have to cook chicken or pork longer than beef, and shrimp or salmon less-long.

Don’t neglect vegetables here – for a cheese fondue you can use broccoli, carrots, apples and other things that you’d usually snack on “raw”. For the oil/broth fondue you can cut up some potatoes, mushrooms, broccoli, asparagus, or whatever other veggies that would survive the cooking process intact. Stuffed mushrooms can be awesome with fondue.

If you use oil, you can also serve a batter along with your meat/veggies since you are basically deep-frying it at low(ish) temperatures. Our experiments along these lines have basically convinced us that it’s more trouble than it’s worth, but it’s fun.

Ideally, you should marinate your meat in something strong enough to impart some flavor after the meat is cooked. Our favorite is a homemade teriyaki made from brandy, soy, and sugar with garlic. If you’re cooking veggies, consider rubbing them in some spices – like getting a recipe for German spiced potatoes.

Dips are a necessity! Our family favorite is basically just mayo with garlic, scallions and chives. Another is 50/50 mayo and sour cream with Dijon mustard.

We sometimes do a salad to go along with it, but if you are doing a cheese fondue first and cooking veggies alongside the meat, it’s really a full meal that doesn’t require any sides other than wine.

Yeah, we usually use that recipe for 4 adults and 2-4 kids, depending on who is visiting. The recipe is just amazing, though.

Apart from cognac (and black pepper instead of white pepper), it’s basically the same recipe I use. I suppose the wine is a little different. I generally go with a Vin de Savoie of some sort or a Riesling from Alsace.

We have an electric cooker, and yeah, the temperature can get weird. I don’t think it’s really a function of the temperature so much as state of the oil in the cooker. As the evening wears on the oil gets gooier as it absorbs some meat broth and it also evaporates off some of is lighter contents, so at the end of the evening it’s still just as hot but it cooks the meat a little differently.

I’m sure some of you have been to Melting Pot, but all of the burners there are now induction, which as a technology is PERFECT for fondue. If you already have small pots, just getting an induction plug-in cooktop off Amazon is a good alternative. You can then use the cooktop and your pots for other uses.

Being induction, cheese, dippings and whatever don’t end up getting burned to any part of it, so clean up is easy and accidental touches to it are safe.

The ones at melting pot and during my recent cooking classes really intrigued me. Basically turning the dial nearly instantly changes the temp/power to the cooking vessel. So you could dial from a boil to a simmer in seconds, and the food (depending on amount of liquid) also changed temps fairly quickly, as the whole vessel reacted more quickly.

Dips are a necessity! Our family favorite is basically just mayo with garlic, scallions and chives. Another is 50/50 mayo and sour cream with Dijon mustard.

How do you do the dips? Do you just dip the meat in them? Or do you use a little hard bread, dip that and then eat it with the piece of steak? I’m going to go grocery shopping so let me know any other dips you all have liked. We’ll be doing steak and shrimp. Hopefully I don’t wont mess it up, want this to be nice for my family.

don’t do it wrong

For us, we have the dip in a small bowl and we spoon some onto our plates then eat it the way that we want to with no regard for the methodology employed by others at the table.

We love cheese fondue, though we haven’t had it in ages. Our preferred recipe is very much like the one listed above, except when we can we substitute Vacherin Fribourgeois for the Emmental; if you can find it, and at a price that isn’t ruinous, it’s amazing with the Gruyere.

The Coq Aa Vin Fondue was a huge success. I went with pork, sirloin, shrimp, then also another set of marinaded pork, and marinaded sirloin. The fondue pot was filled with vegetable stock, cabernet sauvignon, minced garlic, and chopped green onion. I made 8 sauces for the the meats to be dipped in, and we did salad and a bunch of other stuff too. Everything made form scratch which was quite an undertaking. But it was great fun, and went more smoothly than I could imagine.

Thanks for all the advice here.

That sounds awesome, Jeff! I don’t suppose y’all managed to grab any pictures? Sounds like quite the spread!