There are going to be primaries today, even though it finally appears that the Ohio primary has been moved back to June. If you’re an election junkie, enjoy these: they’re the last primaries you may see for 6-10 weeks.

If there’s a silver lining, it’s that lots and lots of voting through early voting has already taken place in Florida and Arizona. Early voting in Illinois sort of happened, but not to the extent that it did in the two sunbelt states.

None of the primaries may be that close, but we’ll see. Maybe Illinois, with turnout depressed, could be.

Personally, I think delayed / postponed primaries will throw a huge monkey wrench into the machinery when it comes to defeating Trump in November. Bernie isn’t going to quit until he is soundly and irrevocably beaten, and that can only happen if (most of) the primaries proceed. So that means there isn’t an inarguable nominee come convention, and maybe there isn’t even a convention. Suddenly we’re 4 months from election and still locked in a pointless fight between Bernie and Biden. That will be a disaster.

Fivethirtyeight is predicting a Biden romp. 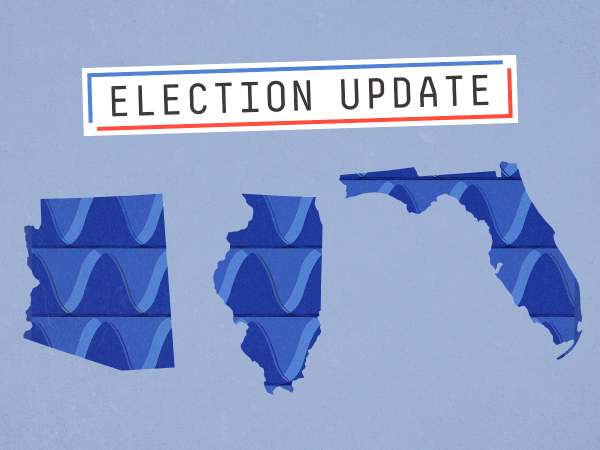 Our Final Forecast For Arizona, Florida And Illinois Shows A Big Biden Lead

In an extraordinary move, Ohio postponed its primary election at the last minute due to concerns about COVID-19, meaning just three states will vote today — Ar…

I would certainly expect a Biden romp in Florida and Illinois. I know very little about Arizona.

Bernie really needs to step down. Otherwise things are going to get ugly.

I also expect turn-out to be light everywhere, and some idiots in the news media will talk about lack of enthusiasm in the electorate, but they are idiots. Coronavirus will suppress vote, NOT lack of hatred of Trump.

I know very little about Arizona.

Poll averages suggest Biden has a lead of ~20 points in Arizona.

I got out and voted this morning. I wish everyone in America could vote as easily as I can. Walk a block, no line and super nice people. In and out. My neighborhood’s participation rate is pretty much the highest in the City too.

I’m going to be furious if Bernie doesn’t drop out assuming he only falls farther behind today. I’d be annoyed even without a pandemic.

Bernie will pout his way to the convention blaming everyone but himself for why he lost. I haven’t seen a single thing from him that would imply he’s changed.

I’m going to be furious if Bernie doesn’t drop out assuming he only falls farther behind today. I’d be annoyed even without a pandemic.

I don’t understand what he thinks he’s doing at this point, but in practical terms he’s exposing people to mortal risk for no good reason and he needs to stop. Now.

It’s interesting that Bernie is so far behind in the Arizona polls. I thought his popularity among Latinxs would make it closer. But, yes, dude needs to go (out of the race and back to the senate, that is). Losing IL and FL by big margins would realistically eliminate him from contention, assuming he’s not already.

Florida has a lot of robust early voting and absentee for any reason so “big” numbers for the peeps who are out.

Yep, as soon as polls close in the panhandle, they’ll call this for Grampy Joe.

Florida looks very much like the rout it was expected to be. 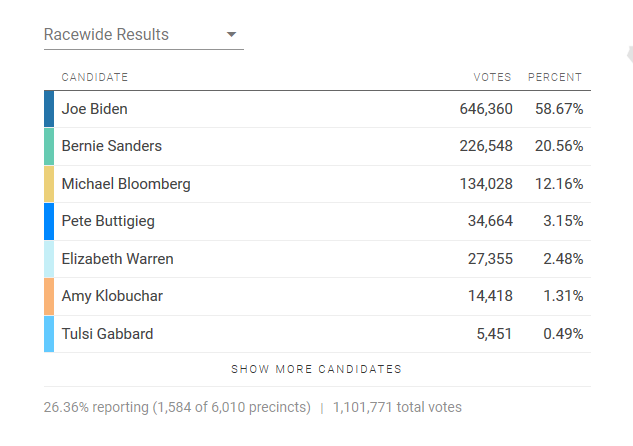 Could’ve called it a week ago, I’m more interested in the spread. My prediction before was Bernie would get 21 +/- 3 I think?

And yeah, gotta wait for the panhandle since the 2000 debacle.

Remember that delegates are awarded among qualifying candidates, so for delegate purposes a Biden 58/21 lead is no different than 73.5/27.5 -- nearly a 50 point margin

So far, turnout in Florida looks comparable to 2016’s primary. Here and in Arizona, the popularity of early voting saved the states from election day chaos. Volusia County, for example, cast around 44k votes in 2016. It’s at 40k with 1/3 of precincts still out.

Given the circumstances, FL coming close to 2016 totals overall is very good to see.

I skipped today because of Corona and I was just going to cast a symbolic vote for Warren.

I apologize to my ancestors who probably had to get in fist fights in the dead of winter to vote.

Given the obvious margin in FL, I'm interested in results in the north & panhandle. Lots of O'Malley votes there in 2016... That is, very anti-Clinton territory...

This is the BIG difference from 4 years ago... Sanders won/did well in a number of counties in the south/Appalachia that were clearly anti-Clinton votes... Biden is doing quite well in those areas this primary, including this evening...
next page →