I’m building an arcade cabinet, and I’m kind of boggled at the state of the emulation. Retropie seems to have unlimited options, tons of forks and pre-made images, and it’s all very confusing.

I have basic needs. I want to play arcade games like Street Fighter, Final Fight, Gauntlet, etc. There’s like 15 different MAMEs. I have no idea which one to use.

Anyone built an arcade cabinet before and gone through this? Is there a definitive resource beyond the Retropie site, which just links me to Github documentation that is completely un-opinionated? FYI this is why the NES Mini was so appealing… plug and play.

This is kind of piracy since you don’t know what systems you want to emulate and therefore don’t own the boards/games.

The legit, plug and play route is to buy a legal prebuilt or put PS3/old PC with the retro collections (Street Fighter and Final fight as well as the old arcade games) are packaged in on Steam that you house inside a cabinet.

Available at Walmart Relive the glory days of arcade gaming in the comfort of your own home with Arcade1Up's Final Fight at home arcade machine! Perfect for when your friends are over, the two-player joystick/button configuration brings the...

If you know what you’re emulating and where to get it (we can’t/won’t discuss here on QT3) you should look into www.mgalaxy.com or www.launchbox-app.com front ends.

Playing games with MAME is sort of a headache: you need multiple versions to support different games because bugs come and go, and besides emulation glitches, usually some aspect of the emulation is thrown away on purpose because of some weird developer philosophy going on there (to give a couple of examples, sound balance is rarely ever properly adjusted, or games won’t slowdown when they are supposed to making them nearly unplayable).
If you want headache free stuff, you better grab some of the PS3/Xbox 360 collections as @rei suggested, although it limits your choices, some titles are poorly emulated and some of the individual titles can be quite pricy if not available on download.
I’ve never built a cabinet: I don’t have the space nor the fascination for the object. I simply play ports I own for my old consoles on a CRT monitor with an arcade stick or an M30, or the collections and old games available on the Switch on a cheap but rotating LCD monitor, with again an arcade stick or an M30.

The reason I have never done it is because of exactly what you describe. It’s way more difficult than it seems even if you discount the legality of it.

What I’ve done instead is what the other two folks have mentioned. I buy legit retro collections with arcade games in them. There are so many great arcade games in the Arcade Archives series now that you can find a ton of stuff that way, plus with something like the Switch and a monitor with a swivel base, you can play both horizontal and vertical games in their proper aspect ratios as well as portable.

The only way I’d go arcade cabinet now is with a Neo Geo Big Red or buying a Candy Cab from someone in the US and start collecting arcade boards/buy Neo Geo MVS games.

MAME is so convoluted now that you need a degree in retro to figure it all out, let alone come up with all the right ROMs.

This search should get you all the Arcade Archives releases…

They do go on sale occasionally.

The Neo Geo Mini is also a great way to get some arcade in your life. 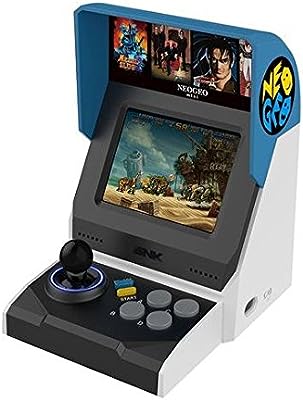 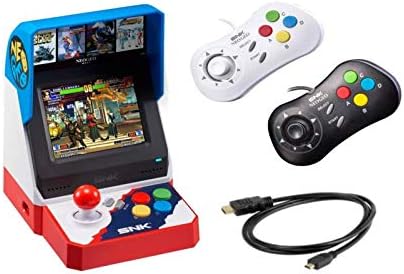 …finally, for Capcom, they have a sale right now on Switch that includes the Capcom Beat 'em Up Bundle and the Street Fighter 30th Anniversary Collection.

Relive the glory days of cooperative arcade games with the Capcom Beat 'Em Up Bundle!

12 arcade classics in one collection!

The MAME ROM set without the CHD (hard drive format) games was around 96GB in 2016 if you are going to go the piracy route. Getting the versions of MAME to work with the versions of ROM dumps was also an arcane art when I dicked around with it years ago.

CHD-using games (full motion video etc,) were another 353 GB! But yeah, basically piracy. If you have to ask, it’s frowned upon.

Yeah I’m not asking where to get games, I have that sorted. And I don’t know how you run a Nintendo Switch into a cab and wire up the control panel to it. I’m looking for an authentic arcade experience here. I even got a coin door and tokens!

It’s really that there are 11 MAMEs on Retropie and it sounds like I need all of them, or a subset of them, or who the fuck knows? What I’m looking for is a seamless experience, like I turn it on and there’s a list of systems and you drill down to the games. I’ve seen so many videos like this on Youtube of people showing off their builds. In practice, this is a colossal pain in my ass. I do feel that comment about needing a PhD in MAME. (Whoever was touting the simplicity of a RetroPie in the NES mini threads can kiss my ass)

I bought a Pi to run this cab rather than a PC. The pi was $40. I could go get a PC but that’s going to blow my budget for this project. I’m not looking to run anything made after like 2000 to be honest.

I’m going to start working on it tomorrow, I’ll keep you all apprised of my progress. Thanks for the thoughts!

I built a cabinet a few years ago. I started from a large archive of ROMs that included the matching MAME version, and a similar Hyperspin (front end) archive that included a ton of movies/art for the front end.

The truth is that most people only need a “base” version of MAME, and even an older one is fine as long as it matches your ROM set. The common older games have been in fine working state for 15 years. I run 0.163 I think which is like 5 years old. The maintenance requirements to upgrade just made me decide that it isn’t worth it.

Base MAME is command line, so you’ll either want a MAME version with a front end menu built in (e.g. MAMEUI), which will be easy and functional but kinda ugly, or a third party front end. This may be different in the Pie scene, I have no idea. I also recommend LaunchBox, which I’m transitioning my machine to. I’m currently running Hyperspin, which looks nice but is basically impossible to cobble together from scratch these days.

If he has RetroPi it should be easy, just point it to the ROMs. I can’t help though as I haven’t set one up firsthand.

Guys I found it

Use this table as a guide when choosing an emulator version:

The problem isn’t the flavour of MAME, but the version.
Ie, 0.196, 0.207, 0213a? This is where the pain comes from.
And having to set up games individually then, and often in a limited way (the most common issue you’ll run into is having a random PSG or FM channel yelling sound while the rest is bellow, with the PCM voices being just whispers in the back).

FWIW I seriously considered the Arcade 1up cabs I saw at Walmart. There’s a whole community of people who mod them. My issue is that they’re so damn small. One of my son’s friend’s dad has one of them and the two of us could barely use it with our adult bodies and man hands.

Yeah, I’m not a fan of the size of those. Better off just getting an old Street Fighter cab at that point.

I played around with it for a while on a Pi 3b a couple years ago and back then somehow determined the best version/set for lr-mame2003 on that hardware was 0.78

I have a full size MAME cabinet I made out of an old TMNT machine about 15 years ago, complete with custom control layout. It was a fun project to do and I just recently upgraded the computer inside and rewired things. I’d be happy to answer any questions about it.

I also have pinball machines and the Star Wars Arcade 1UP cabinet.