On a side note i tried the lunar spawn at level 8… I would not advise that to anyone. For the brief 60 seconds i was alive it was awesome though hahaha.

How many times can a tamed creature be leveled up? I can’t find it anywhere. It used to be 73, but I just leveled my Rex up 82 times and it’s still going.

I found I can kill them by swinging a torch

Really? I tried that but couldn’t seem to hit the swarm. Where do you aim?

Just in the air with the swarm on me, aka stinging. About 100 damage a hit when I was swinging it.

They flipping fly around the map for goodness sakes!!!

@TheJakeNeal @ComplexMinded @thelilpanda They're not intended to be rideable (the probably shouldn't be tameable because it's a lil bit trollish, I'll chat with the team about it when the launch quietens down)
Skipper February 27, 2020, 4:15pm #2154

This is painful. I’m running update a couple hundred times to get just one fully updated. Each update take quite a while before timing out and failing. At least it’s saving progress but man this is bad.

For those who have yet to jump in, this video gives a decent guide to some initial questions on Genesis:

From what I’ve seen, there is a bit of resource isolation which might be part of the attempt to push you back and forth from biome to biome. Using HLNA to jump isn’t precision, but gets you into one of 8 cardinal direction locations within the target biome. There is still quite a bit of use for the Stargate mode due to that.

Also a cautionary note: The Bog is not, “Easy.” It’s easier than cold, heat and drowning, but it’s no walk in the park. Right up there with Aberration on hard starts in my opinion. Today large predators (spinos,) and alphas started showing up.

More strangeness: There are obsidian rocks in arctic biome but picking them only gives stone.

Just in the air with the swarm on me, aka stinging. About 100 damage a hit when I was swinging it.

Apparently there is a bug (haha) that prevents some people from hitting the swarm in 1st person, including myself. I can hit them easily enough in 3rd person, squatting, and just swinging my torch straight ahead. One or two hits is usually enough and sometimes the swarm catches fire and burns to death. A very large insect corpse is left behind for harvesting and even that I cannot hit in 1st person but fine in 3rd! Weird…

The swarms have a center you cant see . Just swing torch level in front of you once to catch them on fire. They will tick 100 damage two or three times swing again rinse and repeat till dead. Swarms are awesome for early hide and meat fyi. I have a small hut set up in the bog after hours of running and being eaten. played tag with a 50 spino last night for a wile was tons of fun. I must of died maybe 40 times easily. Now Level 30 and feeling like I may have a foot hold.

For those who have yet to jump in, this video gives a decent guide to some initial questions on Genesis:

Thanks for that video. It showed and explained a lot of the new stuff.

When I first logged in last night, I was dropped right into a pack of direwolves attaching something, which included me, so I was dead before the startup animations were done.

Second and third times I pretty much froze to death, although the second time I punched a tree to kill myself before the cold got me.

Right now I’m in the Arctic biome in a small thatch hut with 3 fires to keep from freezing.

Right now I’m in the Arctic biome in a small thatch hut with 3 fires to keep from freezing.

I found the Arctic to be very doable once you get out of the areas with wolves and have shelter and fire. Me, I booked it and built my first hut in the far northwest next to the border, killing an ovis along the way. The worst dinos out there are occasional therizins. But I had the advantage of transferring a character over that already had high fortitude; not sure how realistic that might be at lower levels.

A tip that Barstein just mentioned:
Kill ovis. They are very easy kills and drop a boatload of hide, fur and mutton. I made a full set of fur armor from two ovis kills. If you don’t need the mutton throw it in the meat spoiler mod we have and now you’ll have half the mats for 50 narcotics (since they drop upwards of 50 mutton.)

Also if anyone needs to jump in my shacks to get away from anything, they are unlocked for now. 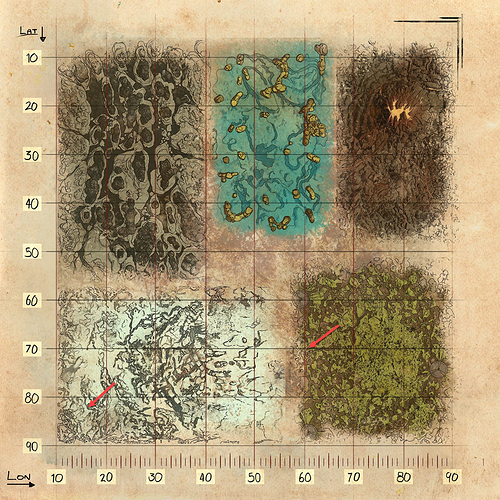 Is that the actual map? Its segmented like that?

If so i assume its for game system reasons…

It is, and something I forgot to bring up earlier is that HLNA doesn’t tell you anything about what’s going on, if you have a character on another map and travel over to genesis from there. There may be a way to ask her that I didn’t notice, though.

Is that the actual map?

It is, I should have spoiler tagged it. You can’t tell much though. What you’re seeing there is the different biomes. To move between them you have to use your HLNA assistant. She “ports you there” and any dinos with you in the port bubble. From topleft, clockwise: low gravity biome, ocean biome, volcano biome, arctic biome, bog biome. That’s why it looks funky.

I’ll bring this up because it was a nasty surprise to me.

X type dinos are tough. First, your dinos do reduced damage to them. Second, they do at least double damage (maybe 3x). Third, shooting them with weapons reduces the weapons effectiveness to 100%.

I should explain #3 a bit more. Let’s say you get an apprentice crossbow that has 175% effectiveness. Meaning it does (base damage * 1.75) = damage per shot. When shooting X dinos, the effectiveness is set back to 100%.

Think of X dinos as mini-alphas, except they a lot more common.

There was a lvl 85 X Yuti by my hut. I had to do a suicide run to drawn it away from my hut because there was not way I could kill it. I had to quickly tame a doed so I could gather stone to make 4 behemoth gate/gateways to make a temp safe dino pen.

Other points, I really like the “store” that HLNA has. I needed hide, so I spent some of my hexagon’s and bought the hide I needed. Ditto for raw meat and crystal. I haven’t used it a lot because I like to save my hexes, but it really helped me out when I was in a pinch. I needed hide to make some of the better gear, but I couldn’t get hide until I got hide, catch-22. HLNA store to the rescue.

The store is my favorite thing by far, as-is the replacement of mostly worthless explorer notes with the glitches that give you points to spend in the store. From what I understand, the quests do the same so I’ve been meaning to try them as well since they have multiple types.

There is still some strangeness and Grem and I discussed if it’s due to the setting of the story, which is that now we know these are AI routines that we live in, like mini-matrixes so to speak. And that they are breaking or glitching. But, I’ve yet to need water to drink. Flyers don’t allow you to fly. Some resources don’t drop resources you think. Etc, etc.

Each biome has it’s own issues as well: bugs, avalanches, whirlpools, lava/fireballs, etc, so that you get more of the feeling that everything is breaking and nothing is really holding up.

X dinos to me sound like that. Not what you expect at all. They are supposed to be similar to aberrant dinos in that they have lower health and higher damage. Some have thought they might lose their buff if tamed?

@Skipper - now you fly with that ptera you tamed.

Yep all servers had to be patched this morning. I wasn’t sure why. This may be it.

Should I change anything or should we keep rolling?

The “bForceCanRideFliers” setting has to be added to the GameUserSettings.ini, so it will require a server reset.

I’ll just add it right now since there doesn’t appear to be anyone on Genesis.