100% this. I just can’t play on a server where it would take me 2 days to tame a dinosaur. Who has that kind of time now days?

@sharaleo as an aside, I don’t mean to speak for @Skipper but I imagine you guys would be very welcome to join our cluster. You could then play on every map, in a friendly PvE environment that is already setup and have some help once in awhile if you needed it =)

Kudos to @Skipper and our admins as a second aside, because this is by far the most stable, reliable server cluster I think I’ve ever played on any game that was personally maintained =) You are awesome sir(s)! I disappeared for like a year and a half and still came back to find my guy and all my stuff all warm and comfy where I left it.

@sharaleo as an aside, I don’t mean to speak for @Skipper but I imagine you guys would be very welcome to join our cluster. You could then play on every map, in a friendly PvE environment that is already setup and have some help once in awhile if you needed it =)

I agree with this completely. I also posted over on the Octopus Overlords forum about the same (we had some players from there previously) but sadly, nobody was still playing Ark over there. Better to have the cluster put to use. Also, FWIW, there are entire servers on our cluster that see only very brief traffic. Sharaleo if your group wanted to have a specific mod/setting, etc, that would be easy to accommodate as well.

I disappeared for like a year and a half and still came back to find my guy and all my stuff all warm and comfy where I left it.

We should all thank @Ragan as he has volunteered a lot of time on our cluster ensuring things run well while I disappear frequently for work projects. Especially so in the backups, as I believe he’s had the files we restored from more than once.

Yes and along with that @Ragan is a font of Ark knowledge in game as well. I have learned much from the sage…

It looks like just the Fjordur server went down. I was in a cave over lava fighting some bats and it stopped and isn’t in the list now.

@Skipper or @Ragan if you have time to restart it sometime, that would be great. Thanks again you two!

Hey man, just saw this. Give me one sec.

It looks like it was both Fjordur and Lost Island. Fjordur showing up now, working on Lost Island as well.

EDIT: And that one up as well now. Sorry for the inconvenience, man.

Log in, enjoy, and thank you for flying ARK airlines this morning!!!

Thanks Skipper! No worries at all. We appreciate all that you do!

I was surprised to find out it actually saved right where it crashed and I fell to my death in the lava in the cave, lol. Won’t be getting that gear back, but I don’t bring stuff in there that I expect to keep so is all good. I guess I should find out if there is a way to summon people corpses like you can dinos.

Generally the saves on the servers are pretty frequent. They still miss things though, and I’m sorry for the gear loss, if you find anything irreplaceable, let me know, I can spawn in things as well, though it’s not perfect.

I thought we had a way to summon corpses though. Maybe that was on another server? Now I can’t remember the mod that does it.

Aww, damn, we have it installed on other servers. It’s called Death Helper. It helps with corpse recovery, especially when they are in hard/impossible to reach places.

Though it won’t help now, I’ll get it on the Fjordur server next reload. 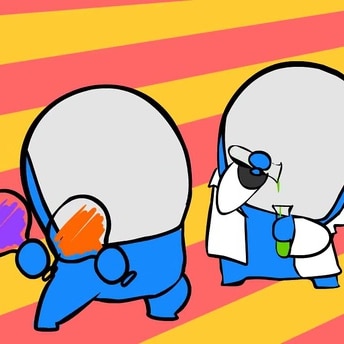 No problem! I wasn’t sure if I was missing it. Going to see if I can drag my corpse out, but I didn’t lose much at all so no biggie.

Has anyone tried to tackle any of the big boy build projects found on Youtube? I’ve done a few medium sized ones - Pilgrimz has a treehouse build that I used for my Rag base, and Aaron Longstaff has an ocean platform design that I’ve used a couple of times, but never had the time or patience for Ark’s batshit build system to see a big one through. But then, I was switched to WFH last year while my work continues to figure out how to turn a warehouse into our new office building.

So I went with the Titanosaur Train Station by Pilgrimz, as it looks pretty awesome and I wanted one. 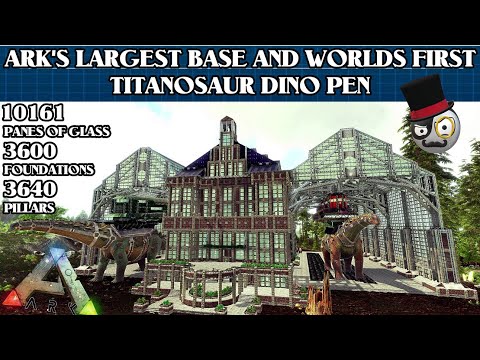 There isn’t a normal “follow along” build video for this one, just the still captures of the building progress in this vid. Despite that, it wasn’t a terribly difficult ordeal.

I built it on Genesis 2, which had just come out when I started making it. Used S+, plus bits from several decor mods. Only cheats I used were no foundations and admin flying to get around. I mined/farmed all materials, which is one of the reasons I wanted to build on Gen2 (Also, I liked the idea of a giant glass-roofed structure inside a glass-roofed megastructure).

So, metal, crystal and obsidian weren’t a problem. But this structure uses tons and tons and tons of silica, cementing paste, electronics, and polymer for all those elevator tracks and dynamic pillars. The only decent place for pearls is the SUMP (underwater area), but you have to wade through dozens of alpha megs to get to it. I just put a couple gachas on the job for a much easier pearl solution. Paste is even harder to come by. I ended up taming a snail (hard to find on this map!) and then cloning the shit out of it for a paste farm.

No Titanosaurs on Gen2, so I repurposed it as a space whale airport. I kept pretty true to the original design, but all that wasted space in the canopies was bothering me, so I added gangways and perches for smaller flying mounts up in the glass roofs. The towers are pretty empty for now. Floors, stairs, lighting are all done, but little else. I’ve been sticking taxidermy displays here and there, so maybe I’ll make it into a museum.

Had to leave out a bunch of decorative bits, like extra tracks on the outside pillars, as it was getting pretty laggy (Ryzen 7 5800X/RTX 3070 Ti). It’s over 3x Ark’s default structure limit, and removing a piece from it takes like 5 seconds. Flying around outside the structure, you’ll see frame rates in the single digits. Much better inside, however (20-30 fps). 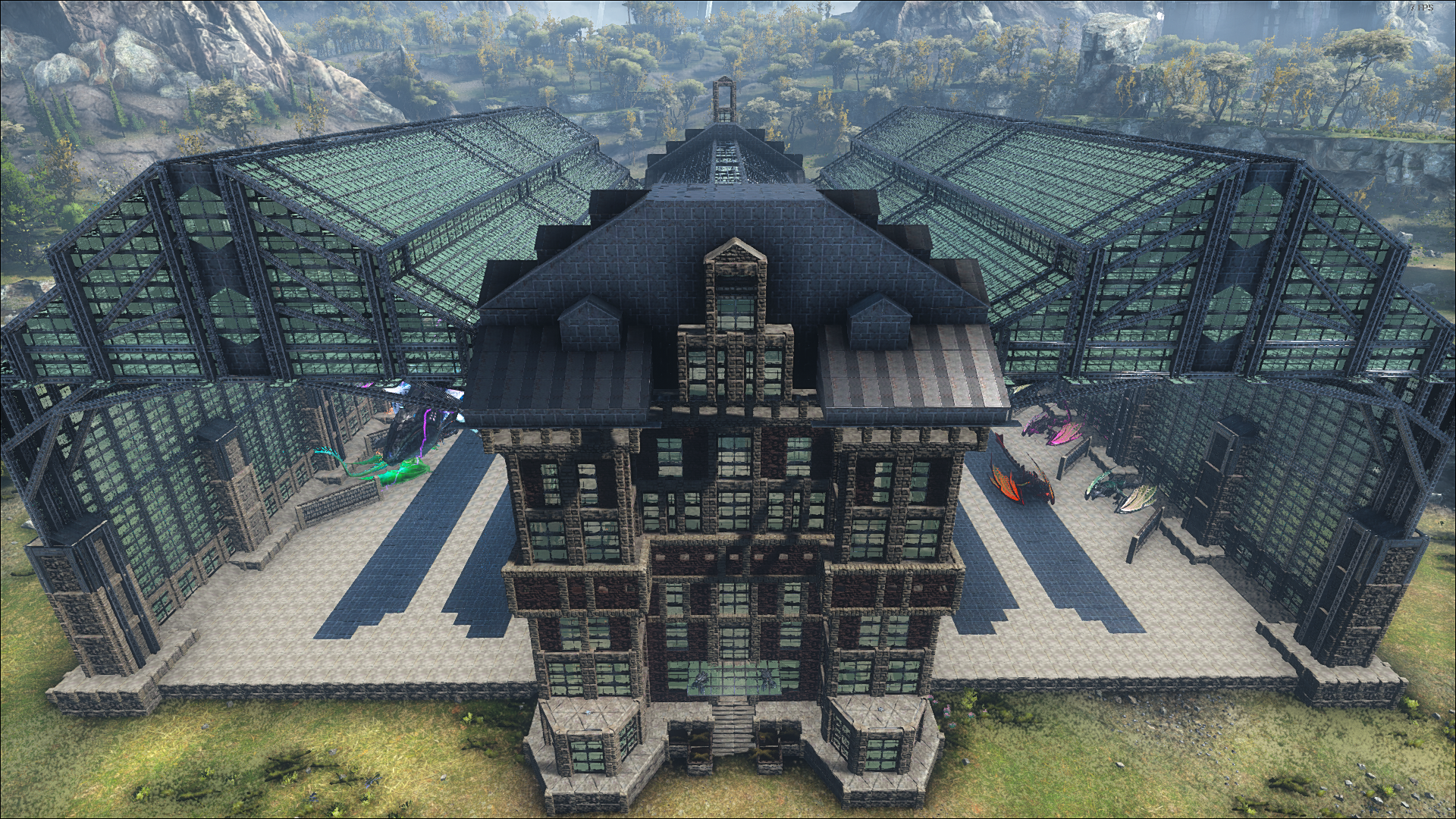 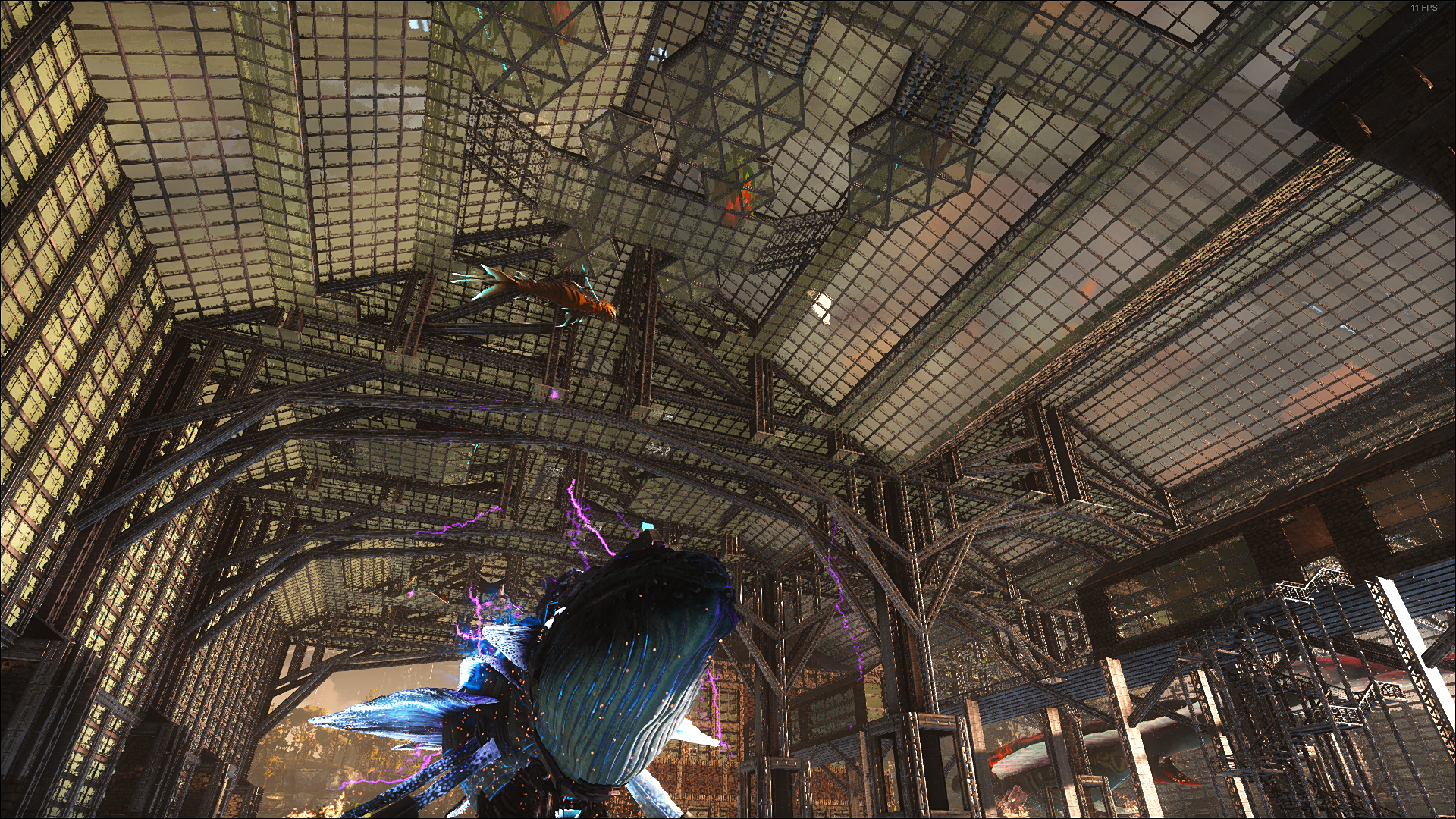 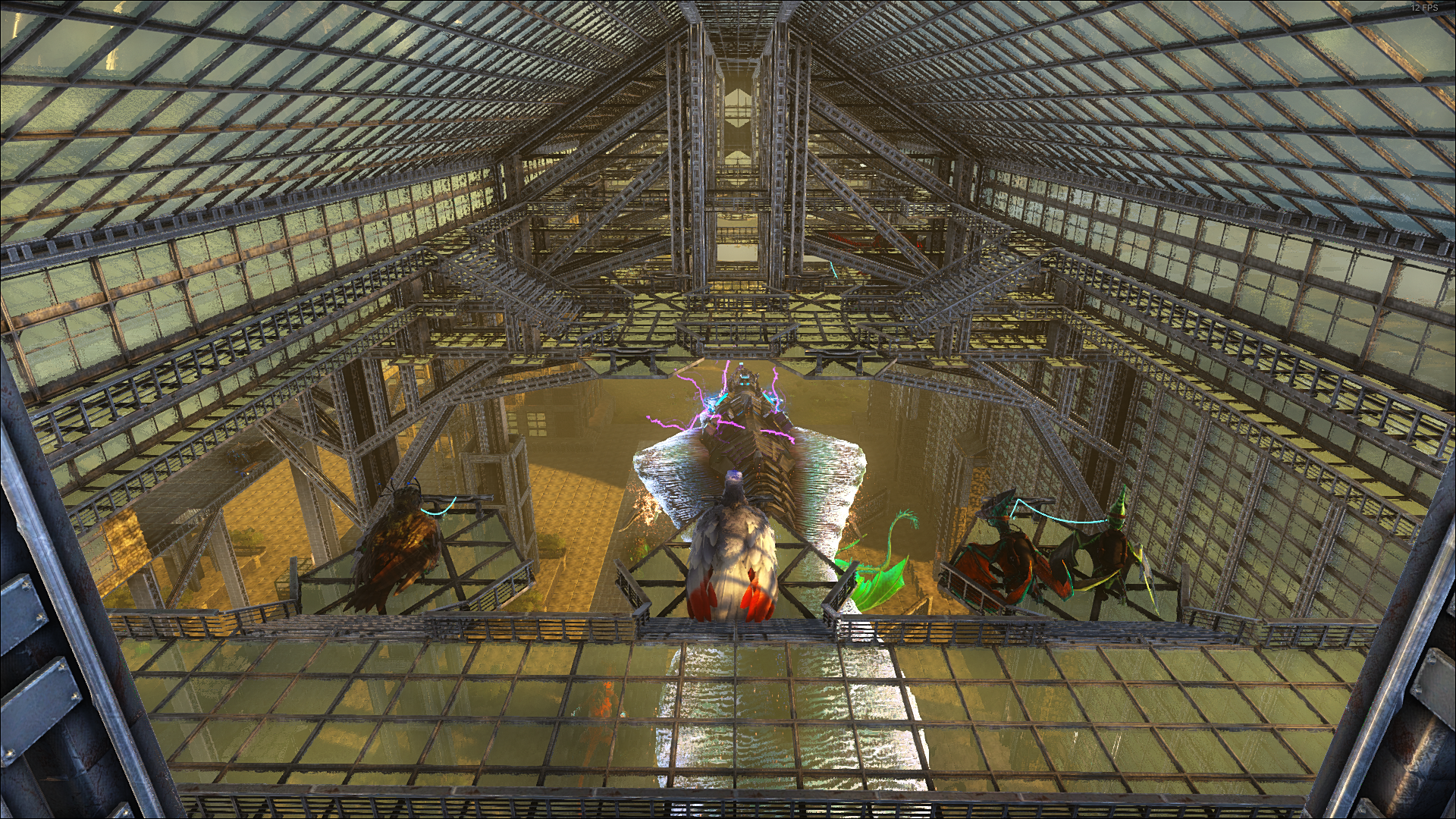 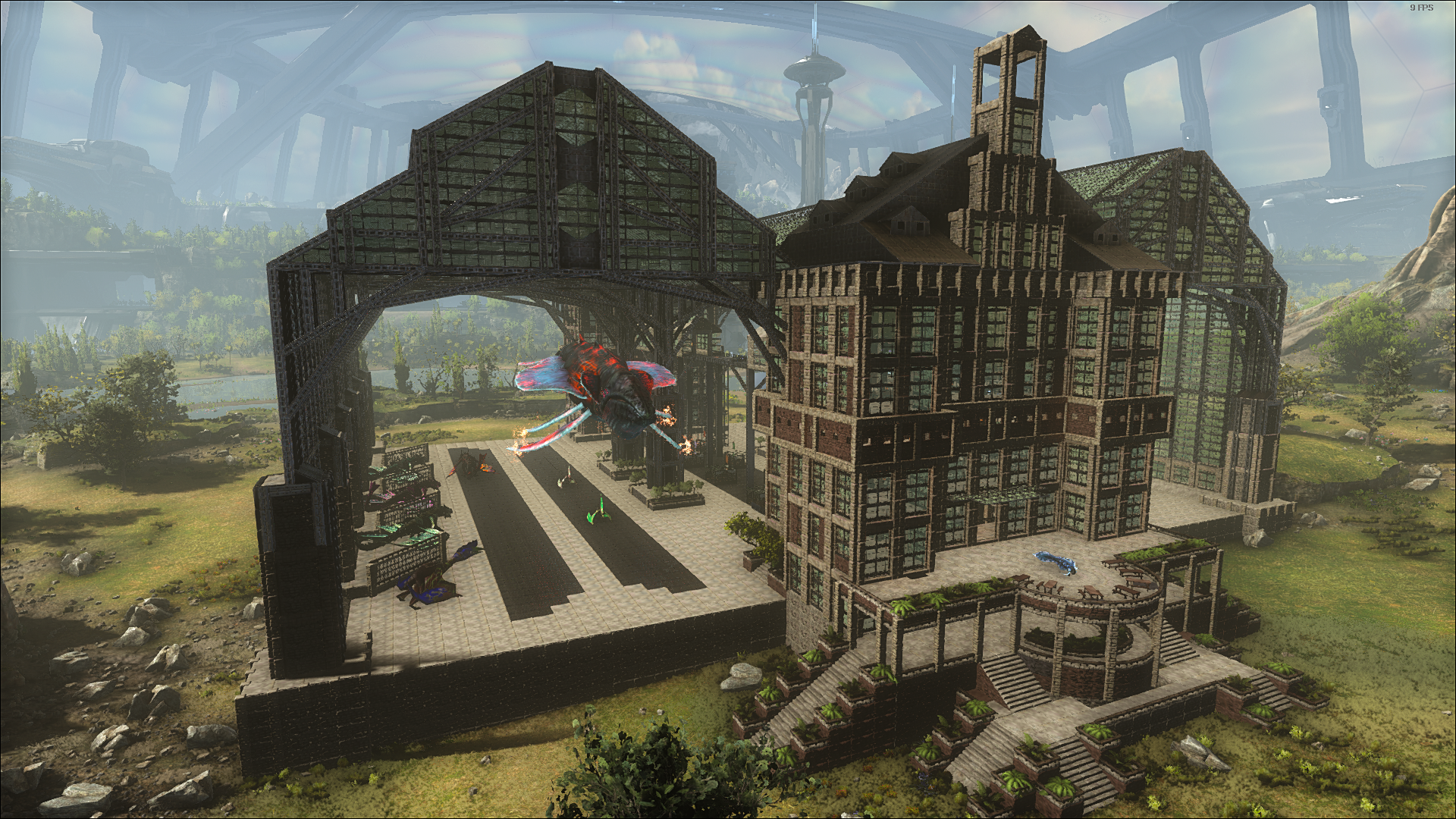 admin flying to get around.

Jesus that gorgeous. I suck at building and end up with rectangular messes that string to other messes.

But I feel like more people on the cluster should know the admin commands to get around and build stuff like this, especially admin flying:

Just in case nobody knows the admin info:

And how to fly and exit fly:

cheat fly - Enters fly mode.
cheat walk - Exits fly mode. Be wary of being in the air when you do this.

While in admin mode from above, any other cheat or similar admin command is at your disposal. The world is yours, have at it.

@TranquilityBase how did you get those beam diagonal crossbars? Those look sweet.

My design mojo is pretty weak as well. Left to my own devices, my builds have all the architectural charm of a backrooms video. But I can follow instructions well enough, and for each one I do, I can usually absorb a design tip or two for the next project.

The diagonal columns are actually dynamic pillars, which is part of S+. You can make them at exact lengths, thicknesses, and angles, even horizontal. I used dynamic stone pillars as the horizontal trim on the offset tower floors. They’re a bit tricky to use - they only attach to ceilings, and each one has its own X-Y directions, based (I think) on which way you were facing when you placed it. But they can be pretty handy for all sorts of things.

Man, and I was so proud of my SP Fjordur build…

The construction looks incredible, but my FPS meter is would go negative if I tried to view something like that in game.

I’m assuming everyone saw the post about a new dino this year, here’s a video summary: 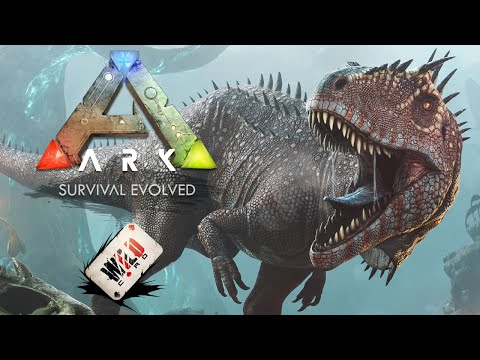 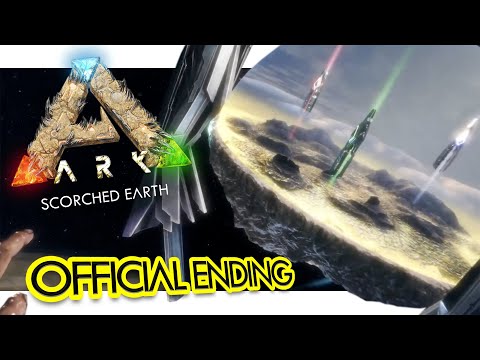 Svartalfheim has a release date! September 30.

(Created by Nekatus, the creator of Fjordur and co-creator of Valguero.)

Good gracious. I already have a half gig of ARK and maps. I’ll be glad when ARK2 shows up.