I’m for all of those as well. I’m probably the one who would lean on some of the others as well (upgrade station, rare sightings, stargates.)

The various servers have slightly different lists because they sometimes have specific mods for the map. As an example, Aberration has a mod for drake eggs (unless it was removed.) We also have some mods that really should be trimmed, as they aren’t used much if ever and the tradeoff is longer patch time, server reboot time, etc.

We also have a mix right now of S+ and Super Structures, which are nearly equivalent but should be re-standardized across the maps, something Ragan mentioned and I agree with. I’m not sure if all servers have been switched back to S+. S+ seems active again, I’d say that’s best. I’ll lay out the others:

Should probably be trimmed:
Bridge mod - I’ve used it once. I don’t think many of the other users have even used it.
Oil Compressor - Goes around the gameplay for oil and is pretty OP
Platforms Plus - The rarity of any of us using platforms makes this a heavy mod for little use
Pillars Plus - S+ has a lot of this, I’m not really sure what we need more than that for
Pet Finder - Sometimes works, sometimes doesn’t? Not sure if this is the same as Dino Tracker?
Omnicular or Super Spyglass - We have a user split in which one people like more
Armor Stand - Not used much
Snappy Saddles and Rafts - S+ takes care of a lot of this, Snappy was an extension but for as little as we have either … probably should be trimmed.
Ticket Mod - deprecated, replaced with Boss Mods

I’m open to suggestions to add/remove or just add the ones Ragan mentioned, etc. Also @barstein, these get loaded when joining the first cluster server with them, and due to the number, you’ll time out several times upon first connect as the mods take a while to get loaded. You have to reattempt a few times. Due to that, try connecting to a cluster server on its own a few times until you’re successfully connected, then upon character select you can bail out. After that, you can transfer your character/dinos/belongings across servers.

The issue with mods is that if they don’t match across the cluster, we’re left with either not being able to transfer mod items on us(transfer prevention), or them disappearing when transferring(item loss).

Gentlemen are we in agreement to mod?

Thanks, all. I really don’t need much myself as far as mods go, as I’m still used to the PS4’s mostly vanilla experience, but that all sounds great to me!

Appreciate the list. I’ll go through the list above and then test out an Extinction transfer tomorrow for a planned expedition. (Plan to bring back some Snow Owls and Velos to Crystal Isles.) Hopefully I won’t be away from the home map for long. Is there a mod for enabling cluster chat? ;)

I’ve been trying to join (I’m on Epic) but I’ve not been able to connect. Are mods already installed on the Crystal Isles?

I just verified that there are no mods installed on the Crystal Isles server.

What sort of connection issues are you having? Is the server not showing up in the list? Are you timing out trying to join?

I don’t see anything in the Ark server lists but I only seem to be able to filter based on server name, not IP.
The way I usually connect is to start a single player then type: open 155.254.28.106:27015 into the console. That’s not working in this case though as it appears to just time out.

It was mentioned up above that you have to search by name in the filter list, so just QT3 should get you somewhere.

That being said there were also reports that the epic clients still have issues connecting to some Steam services. I haven’t connected since early testing, but it did work for me at the time.

Is there a mod for enabling cluster chat?

That’s provided by plugins versus mods (so server-side.) We have one already, though Crystal Isles hasn’t really been tested with it much since we’ve all been on that one server. Chatting regularly like we do sends the messages throughout the cluster. It makes it feel like we’re still together, even when on different maps.

Not sure if this is right:

Should I let it install? I realize it’s not being used on the servers, but I wonder if I need to have it installed in order to fool the game client, or something (didn’t need to for Crystal, obviously).

Keep reattempting. It’s the larger mods that get hung up and will -eventually- finish loading and you’ll connect. It’ll seem like everything is broken, right up until it works.

If you think you are truly hung, close the game, close Steam, restart Steam and try again.

Steam “subscribes” you to the mods so they will load, eventually. You can see why this is best done with a blank character attempting to connect, you can end up in limbo if you transfer directly to a modded server.

You do not need battleye at all.

The servers list varying numbers of mods (Island 21, Rag 16, Ext 18, Gen 20) but all seem to fail and crash or close the client before reaching the end of the list and I never seem to go over 18/21. I think that’s what you’re talking about by looking like it’s broken?

And with Valguero and Aberration, joining doesn’t even initiate and I’m directed to ensure that the server I’m attempting to join is running the latest version of all mod content. (I installed everything on the list, above, minus Dino Healthbars/Torpbars which doesn’t exist in the Workshop.)

Also slowed down a bit because after each connection failure, the respective server has me down as already connected, and so won’t initiate the process until after a cooldown expires, and I’ve only got four servers I can use for this process.

But I’ll keep hammering it! Hopefully it will take eventually.

It was mentioned up above that you have to search by name in the filter list, so just QT3 should get you somewhere.

Sorry, I didn’t see that. I’ve since tried it though with no luck. The only way I’ve ever successfully connected to a server is directly using the open <server>:<port> option which doesn’t work in this case. I guess I’ll have to wait until Epic gets their act together.

Gonna table using the other servers for now, failing at the same point each time and doesn’t feel like it’s correcting or changing. I’ll give it another go later when the mod list is finalized, or something.

Gonna table using the other servers for now

No worries man, my apologies. I’ll take a look. Guaranteed something is out of date or now deactivated (mods.)

@barstein I stole your layout for your Griffon taming. Worked like a charm thanks!

Nice! One thing I’ve found with that trap is, the increased height on the version you saw means you have to be kinda quick with two pillars when closing the trap. I’ve also used a slightly shorter version of that design, which is easier to close and quicker to make, but your ptera has to be really low to the ground (or on foot) when leading argents or griffins into it, or they’ll miss the entrance.

Edit: speaking of traps, here is what I use for snow owls. Got a kit ready to go once I can get into Extinction. Owls are my favorite flyers. 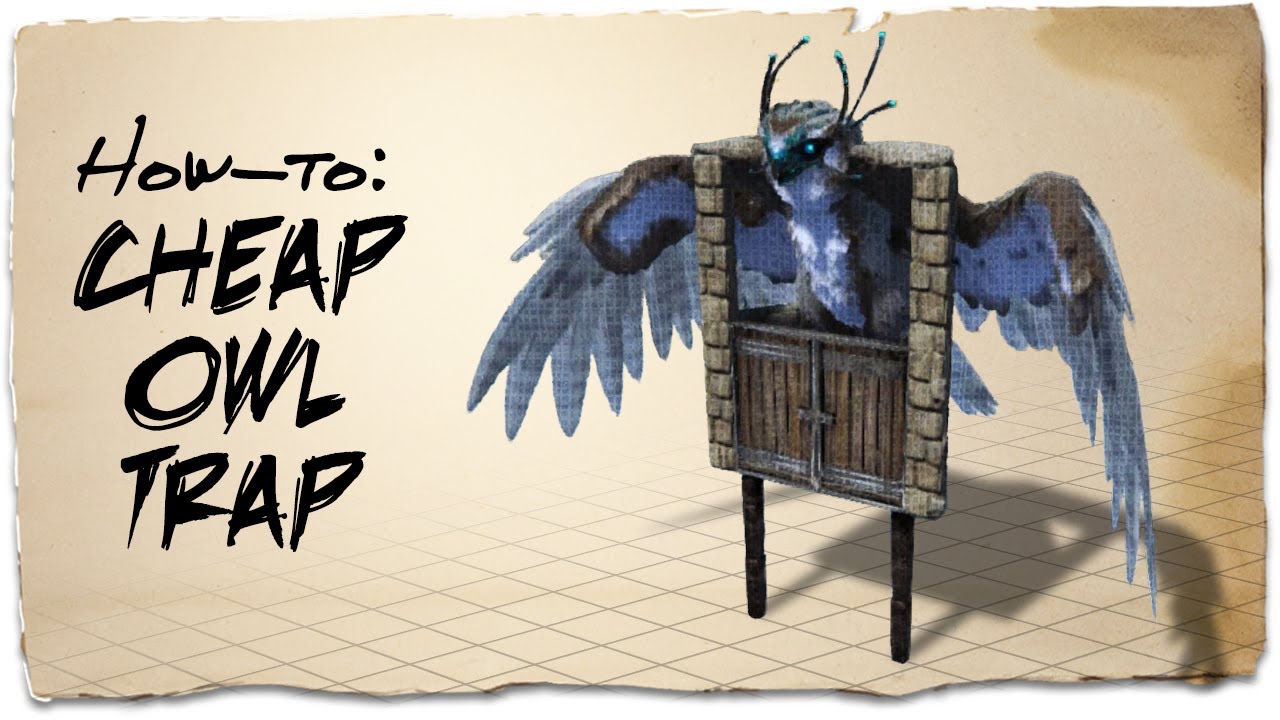 So I went shorter with three pillars I also left one ceiling tile out so my Argy could fly straight up at the end of the trap. Worked really well. Then all you do is park the argy just out of contact range and drop a pillar at the front to seal the trap.

Welp the Grem adventures have been pretty tame with this go around… until today.

Took a trip this morning over to Kels slice of heaven to give him and invite. On the way back what do I see but a sweet 174 tek Q. I was like oh hell yes. Flew home grabbed 200 tranq arrows and headed back out.

Took me 30 mins to find the damn thing again. I should of known right then and there it was going to be a disaster. Finally found it and started the process of trying to shoot this thing down. two crossbows later I am out of tranq arrows. Have to fly back to the base whip up another 100 and head back out. Now I may of missed a few shots but no more then fifty. Here is where I probably should of just logged.

I track the beast back down slap a few more arrows into it thinking man I have to be close. Bam I kill it…

Now in hind sight I probably should of been using tranq darts.

Bummer! I’m pretty sure I used arrows at some point in the past, but not 100% sure. Probably not, since that one was so high level.

Didn’t realize we were tribing up, I’ll hit you guys up next time you’re on.

I braved the Griffin/Wyvern area again today (first time since my last disaster) and set up/tested a Wyvern trap. Works great! I think my first tester was a 90 Poison Wyvern who succumbed to 28 plant turrets after getting stuck in the trap. I’ll need to test several more before I fully trust the setup. I’d particularly like to know how well it works on a Fire Wyvern, who might be able to destroy the plants if it targets them, but I’m fairly confidant it’ll be fine.

The trap is open to everyone for use, and the plants are currently armed. And I have a dozen or so spare plant turrets inside a box nearby, should any plants get destroyed or whatnot. Everything is fairly close to the Griffin trap you guys saw. Note that it might require more than one pass to get the Wyvern stuck inside the trap, as there’s a narrow entrance for it. To do so, you’d want to fly through the bottom center of the trap and make sure the Wyvern is directly behind you.

Should double as a milk trap too, should we end up needing milk (not sure what the hunger timer is set to on this server), but if you want to use it for that you’d need to put the plants to sleep first, or have me do it. Another good reason to all be in the same tribe, I guess. 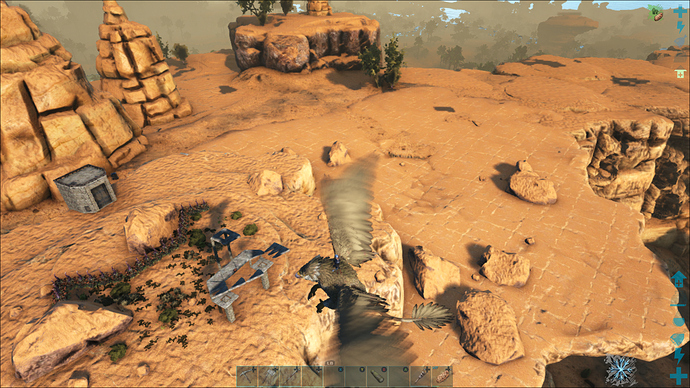 As for Wyvern nests with eggs in them, I have no idea where any are at this point.

Ragan has found the eggs.

I found one too, just outside one of the entrances (only an 80 egg). Also learned an important lesson about trying to find my way back to the trap in the dark. (Plants working out great, btw, kills 'em in seconds).

Should double as a milk trap too, should we end up needing milk (not sure what the hunger timer is set to on this server)

Great question. The timers are very long and growth rate very fast. It’s possible you could get a baby through it without milk. *