Sorry, but sometimes I’m dumb. Does that include a Crystal Isles wipe, or no?

No it will not. We’ve essentially just done that already as part of this maps playthrough (unmodded for quite some time, etc.)

Hah I beat you to the punch @skipper :P

I felt a great disturbance in the ARKs… as if millions of dinos suddenly cried out in terror, and were suddenly silenced. I fear something terrible has happened. We have angered the Titans, and they now have decided that to destroy our progress is their only method of ensuring we continue to recognize them.

The wheel of ARKs turns, and ages come and pass, leaving memories that become legend. Legend fades to myth, and even myth is long forgotten when the age that gave it birth comes again. The wheel of ARKs renews.

There is no password to enter these ARKs. You are the masters of these new domains. You may transfer at will with items, dinos and gear between any cluster member using a Obelisk, Beacon (loot drop,) or a vanilla or S+ TEK Transmitter. Administrative information has been sent to those who post here. Note that you have the ability to ban as needed. As these are modded, they are STEAM VERSION ONLY.

For any server administrative issues, copy @Skipper or @Ragan.

I haven’t tried Extinction or Valguero so may have to take a look at those eventually too.

Oh man so much to do…

Is traveling between maps to Crystal Isles working normally now?

It is, I noticed one strange issue prior to all of this, and that is I wasn’t able to manually load/unload dinos for transfer betwen the ARKs. I have not yet attempted that after the refresh on all of them. If at all possible, test that with a dino you don’t care about first! Normally this works without issue, I wasn’t sure if that was something strange about Crystal Isles or if I missed a config option on that server.

Cryo’ing dinos and transferring them that way worked without a hitch, however.

So you tested naked travel to Crystal Isles (character has no armor or items or any kind on them), as well as uploading items to ARK Data while on some other map, and then downloading them again once on Crystal Isles? If so, that’s great to hear. I guess I should test all of that also, using stuff/dinos I don’t care about.

From the little I’ve pieced together, it sounds like the transfer restriction is deliberate, to protect players from griefing on Official, and for whatever reason it applies to private servers as well. I’ve also read that it only lasts a month or two after a new map is released. What bugs me most is I can’t seem to find any statements from Wildcard about it, so everything I’ve read is basically hearsay.

I have but now is a good time to talk about the process. This method moves your current character, level and all, to another server in the cluster. You can take items, etc. Mods are the same throughout so you can transfer with inventory if you want, and items worn, if you want. You’re picking your path on the remote server as to how hard you want to make it. The same with dinos, cryo’d dinos, etc.

So that some of you can see what I’m talking about, there are three methods:

Please note that because of this process, finding locations to build on a server should try to be near something above. Also note I cheated in the transmitter used here to show you. You can do that too, I don’t recommend it as you kind of ruin the fun of getting that engram eventually (which I had on the character I deleted along the way to Crystal Isles.)
In admin mode, that command is:

Back to the process, this is a transmitter. It needs no power despite what it says: 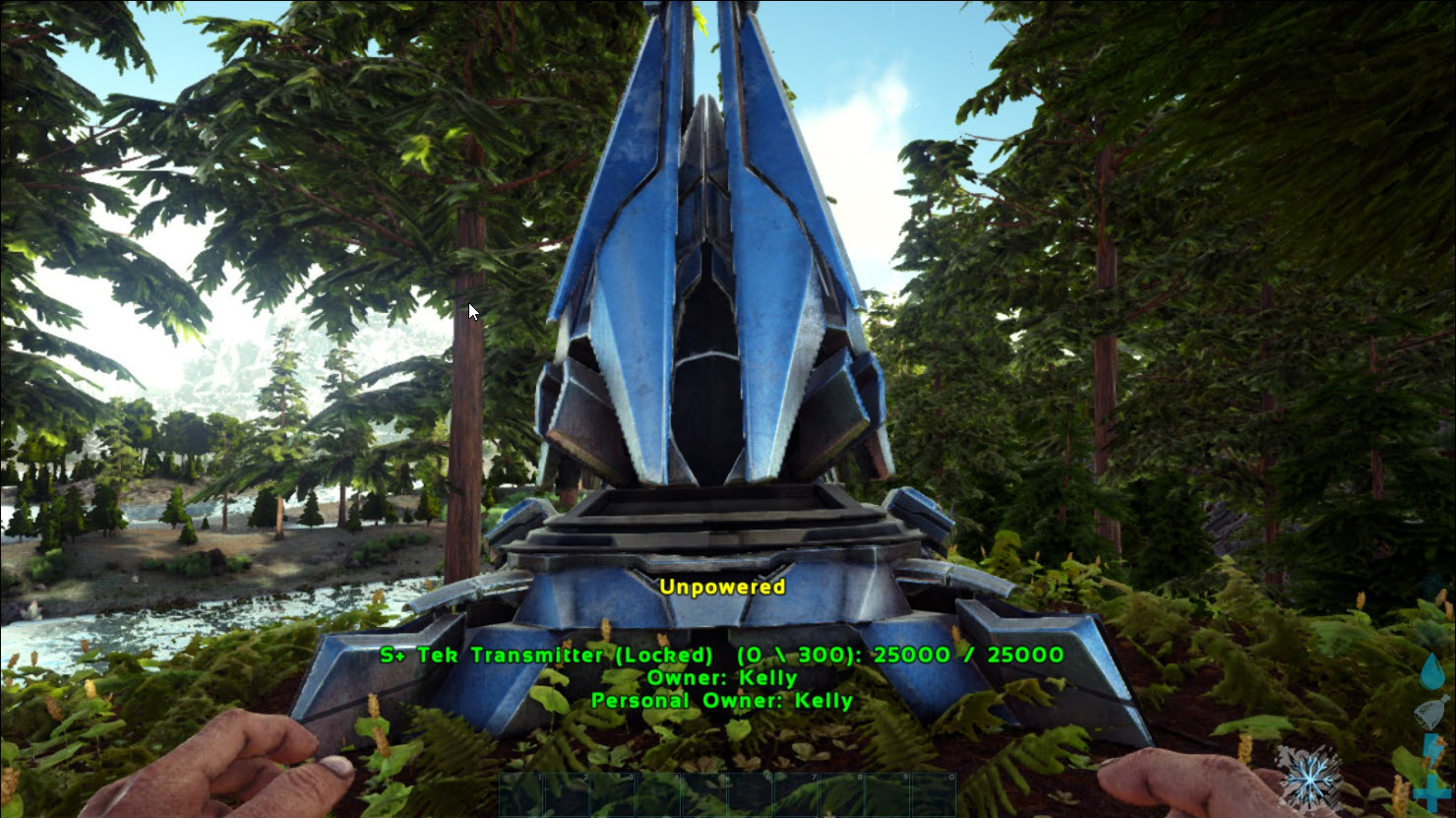 You select a travel to another server: 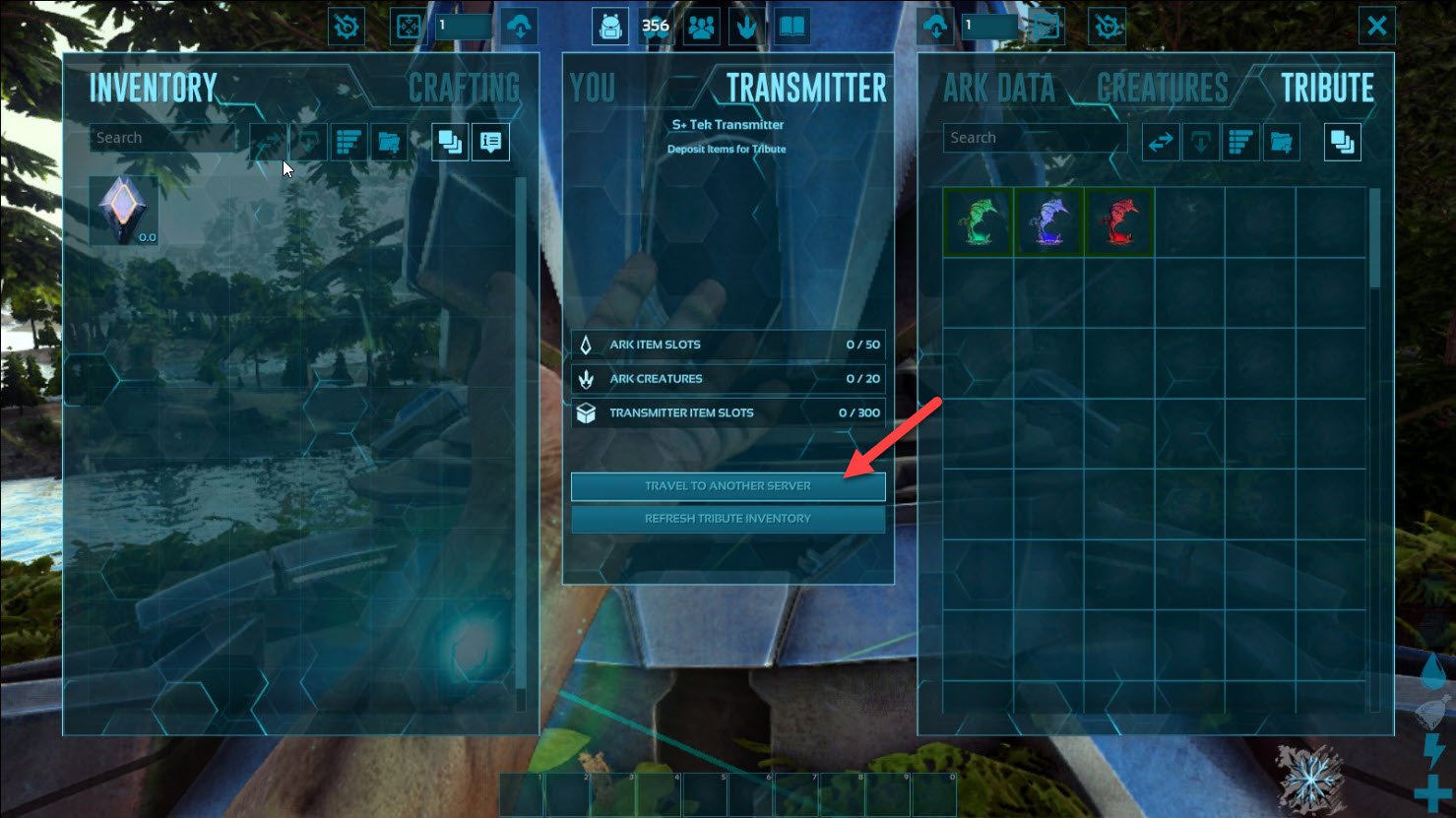 Then select the server then join with current survivor (aka YOU): 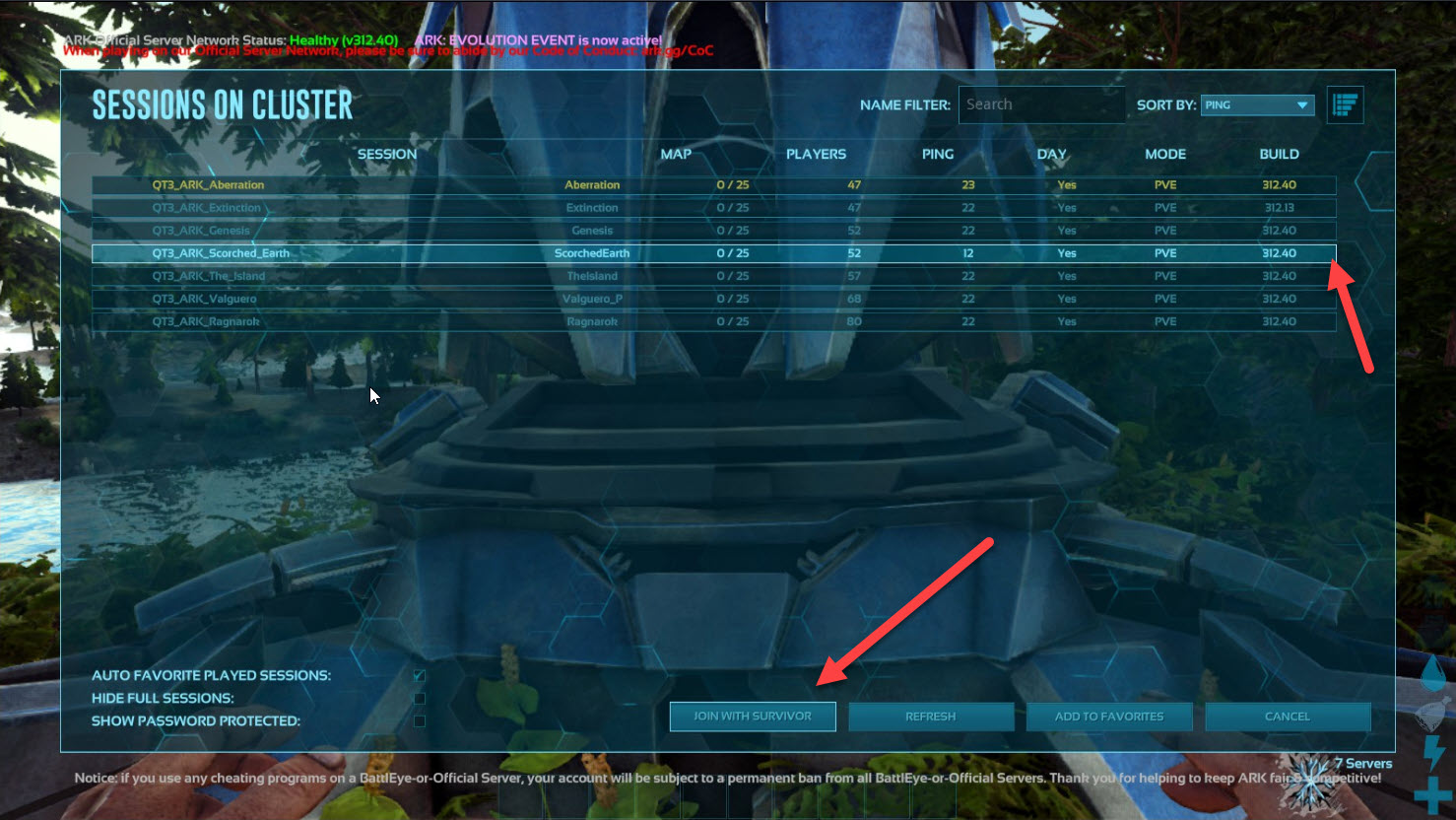 Now you’re literally spawning anew (because it’s a new server) so you select a region, but you now have a new selection of using your current survivor (again, YOU): 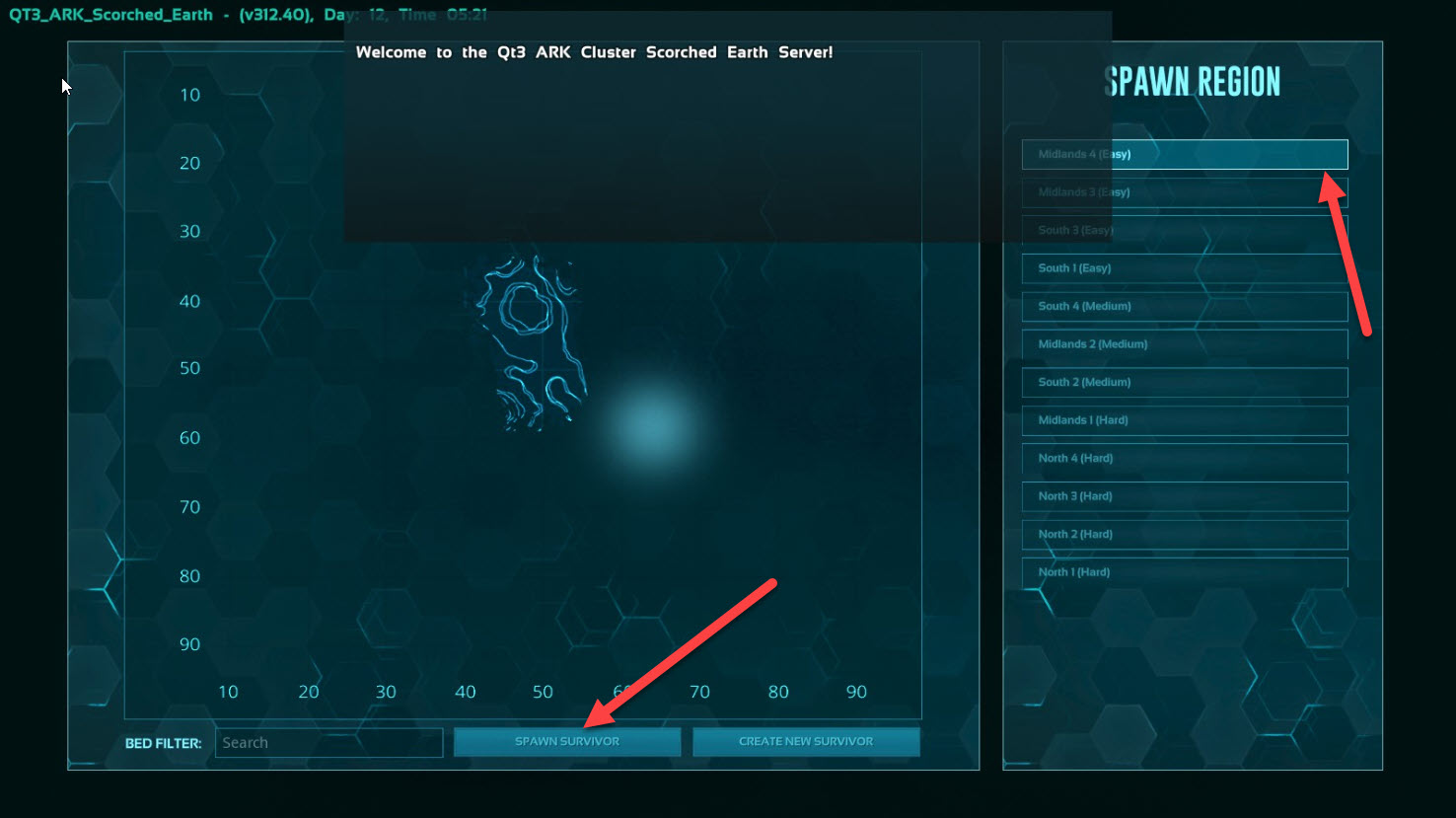 So now you’re on a new server, you have nothing. Or, you’ve been here before, you respawned AT YOUR BASE there and you need to hop back to some new server.

In this case we’re selecting to travel with an Obelisk. On Scorched earth, all of them are near water, so they are popular spots. 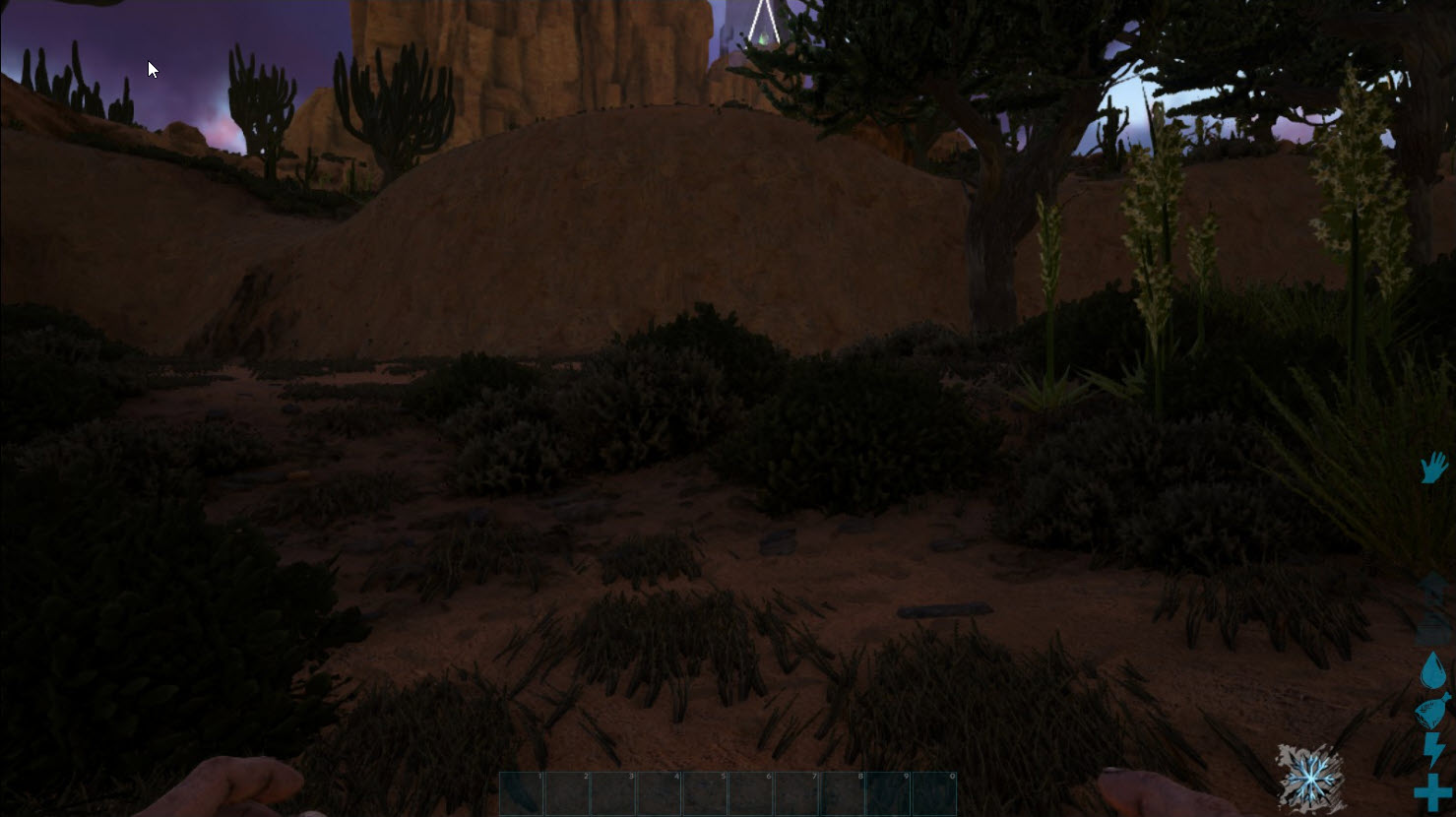 You play for a bit and build up, etc. You find a beacon or Obelisk or build up and have a transmitter. Now it’s time to travel back.

You find an obelisk and select travel: 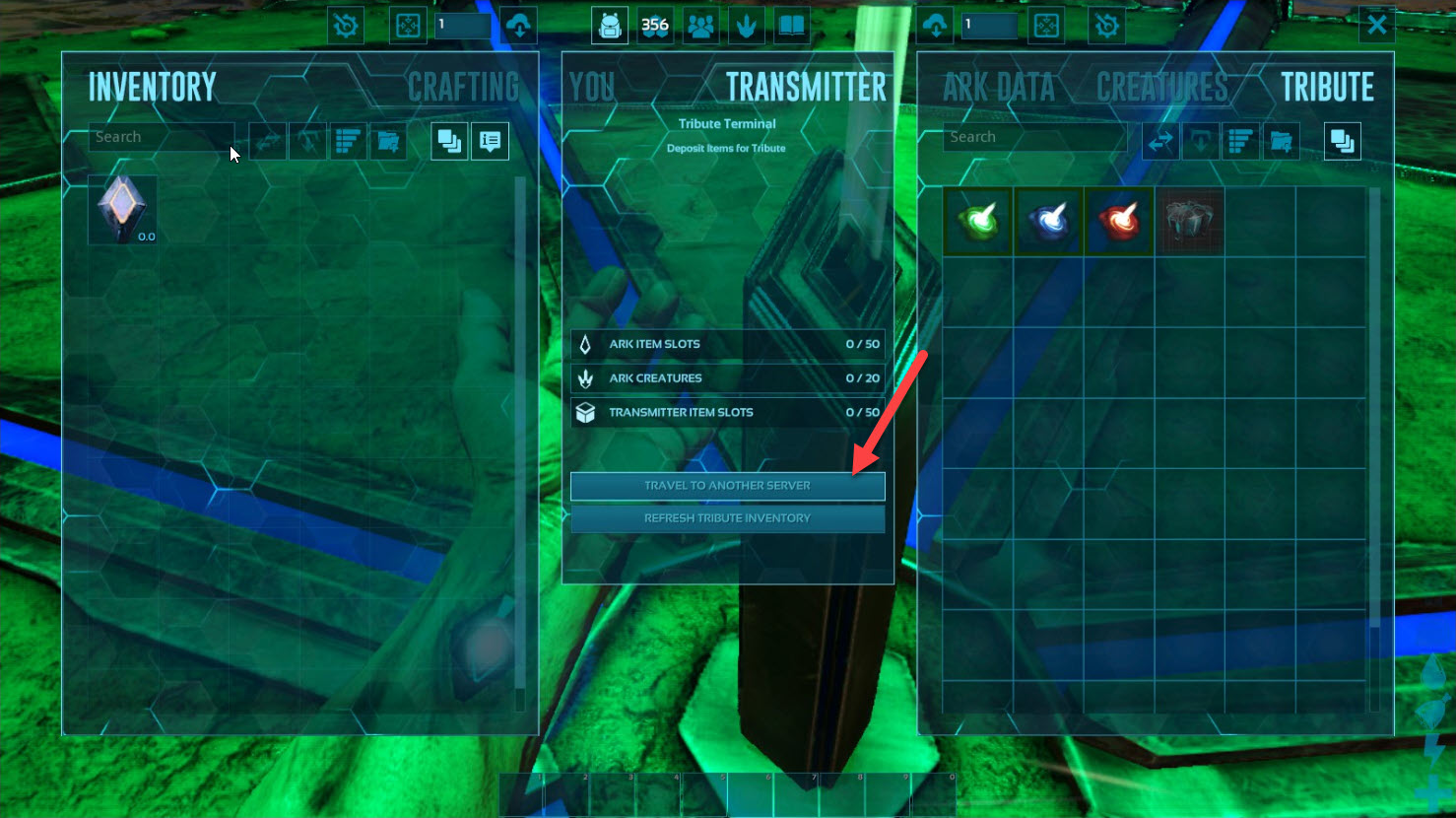 Then select your return server and, “join with survivor,”: 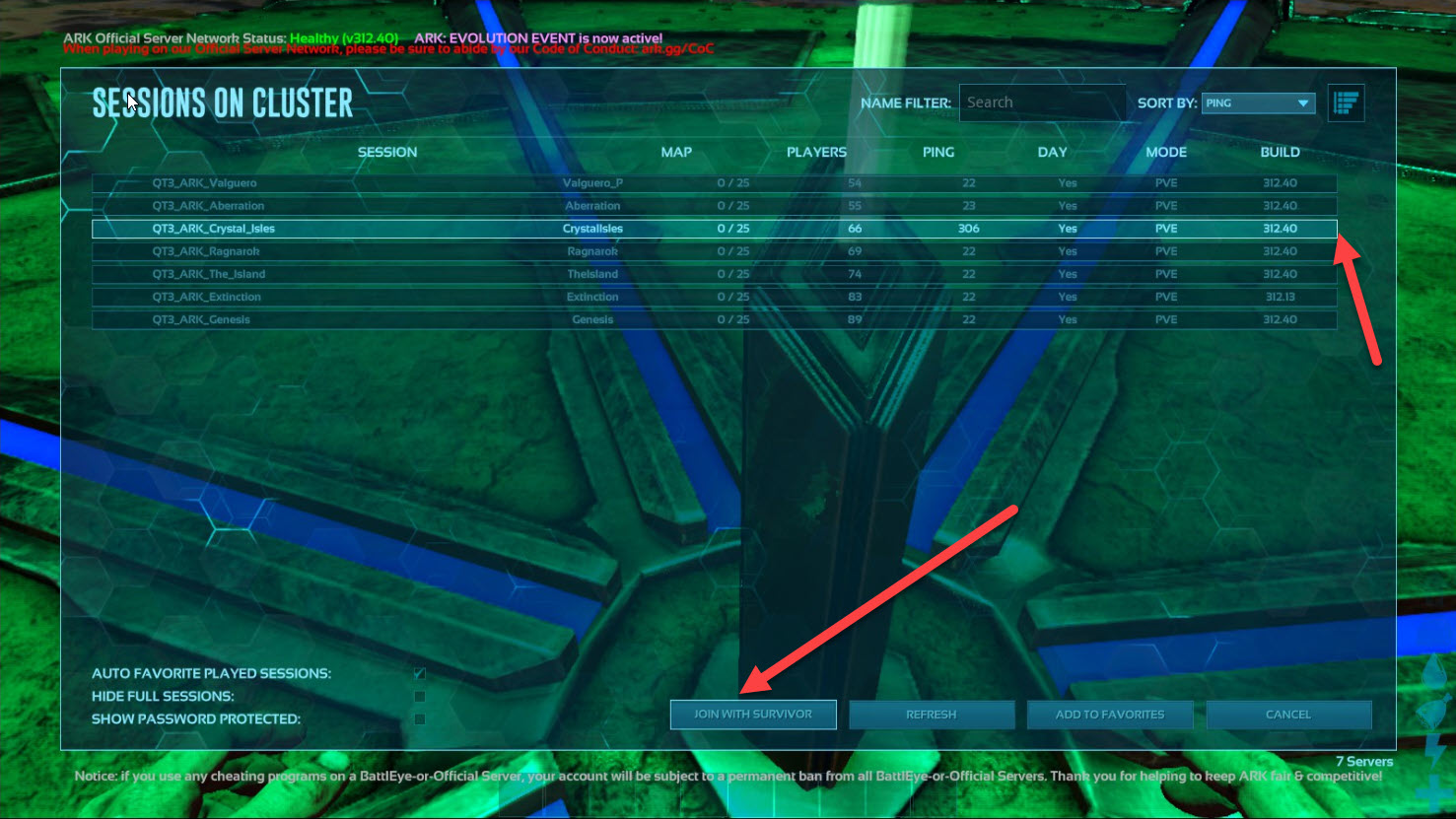 Finally you respawn somewhere you’ve been before, and get to select one of the beds you’ve got access to. This will spawn you with all your items.: 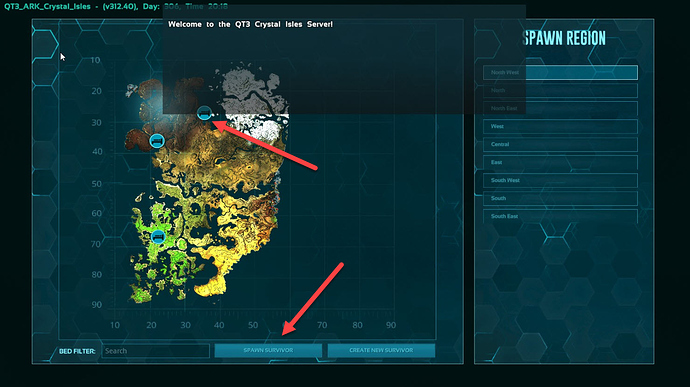 From those same three methods above, you can also select the following items:

Great overview, Skip. Sorry for glossing over the details earlier and potentially confusing anyone who might have been fuzzy on cluster travel, or unaware that it was a thing. Given that this cluster has been running for some time, I totally assumed all of y’all were veterans in that regard. (I’m familiar with it from my days on other, public clusters.)

Just now I tested a trip from Crystal Isles to Extinction and back and it worked 100% as it should in both directions. Was wearing armor and carrying items (including a cryo’d dino) during both transfers and experienced no problems.

So, I haven’t played since I played with you guys a year+ ago and only on the original map… What server would you recommend for me to hop onto? I’d kind of like to see some of the new stuff, but when I hopped on before the wipe I was in some strange building like area with no water and rainbow dinosaurs and got a bit overwhelmed… Any suggestions?

Note that you won’t be likely to see much that’s new, at first, until you build up enough to allow travel over to certain locations. Unless you decide to bite the bullet and start out in or near one of those locations, that is.

We’re all on Crystal Isles as of now (server info above.) Since all the other servers were reset, it’s where you’d be able to get help from us if needed. It’s a mix of a map with a little bit of all kinds of areas. Be sure and download that map off Steam, it’s free. Not knowing which DLC’s you own, the other maps are marked below:

If you think you’ll get back into it quickly, join us on Crystal Isles. If you want a full re-intro to the game, you can’t go wrong with The Island. It’s the starter map, easy to navigate and most of us know it well.

Remember hit enter for chat and type out questions you have. The chat is cluster wide so we’ll all see it.

Not that I have the disk space/time to re-install at this moment, but how does Crystal Isles compare to Ragnarok? At a glance they both seem to be comparable “new map, with a mish-mash of critters and stuff from all the official maps”. Which is an idea I like - a big map with ALL THE THINGS! I am definitely a collector when I get into a game.

You got it in one, Calelari. I really like it for the reasons you listed. Plus it has at least one new, unique dino in addition to the new Wyvern variants, as well as easier access to certain dinos that are somewhat harder to reach/capture on their “native” maps. It also has a couple of very unique map features that I still haven’t fully explored. Note that it doesn’t actually have all the dinos from all the maps, though. A few will require visiting other maps on the cluster.

Valguero also falls into a similar category, I think, but it’s much more punishing to players in the beginning, in my opinion.

If for some unknown reason you spawn in in the very south east corner on the swamp beach, just suicide out. I was exploring there yesterday on a flier. That is the bottom corner of the swamp biome and it was nothing but sacro, kapro, & raptors.

I started on Crystal in the South West Corner I think? Lots of gators is what I see… I am treading lightly… =)

Cool! I am South, but sorta West also. If you come a bit more East there seem to be less predators, but up to you! There are Dilos and Titanboas, but no gators. Raptors if you get closer to the desert. Watch out for the wyverns about! a few in the south areas near the water.

I’m set up near the exact center of the map. Boring area to look at, but it’s worked out well. Abundance of argents, pteras, ankylos, doeds, beavers, mammoths and various other dinos.