It’s the one you develop yourself…

As someone who hordes health potions in video games, I really liked how the game was designed for you to use all the resources you had during a run, because at the worst you’ll reset the map and try again. The only place I failed that was on not spending much of my sim points until the end, but I enjoyed the runs enough that the game hadn’t worn out it’s welcome when I wrapped it up.

I never did go nuts with sim points and had something like 150K when i finished. It was easy enough to harvest lots of resources in game and fab almost everything you’d need.

Ahahahahaahah. Did it. What a great game. Although it probably couldn’t exist without the base game, I did enjoy this more. Almost 30 hours all told, which I think was longer than the main game too.

I must admit I didn’t grasp what the mule was for until rather late :/ I also didn’t grok the gate zapper at first, so some earlier runs had a lot of dying to moonsharks in the crater.

It’s interesting to contrast this with say Watch Dogs: Legion, which also had many playable characters but no great advantage to doing so, whereas this really had a point to playing each of your tragic moonbabies. Ubisoft pay attention!

@Roguefrog - my way: My engineer stocked the mass driver but took a pod. The spy did go through the portal. Then the test subject just jumped in the mass driver, the security chief took the shuttle and the director did the mind transfer.

My route made it so I only went to MoonWorks one time (provided the escape pod is also not there), and I wanted to knock it out completely in the very first run. All the other runs are Labs/Living Quarters which I find much easier to navigate.

Prey itself is the Epic freebie right now…

Also note that it’s a bit hidden in the description but Mooncrash DLC is included in the Epic version.

Last week, I got all excited to give Mooncrash a proper try after reading about it in the Deathloop thread. But, much to my dismay, Steam and Prey and my Xbox controller didn’t want to cooperate. I tried messing around with my settings for a few nights before giving up.

Well, Epic just came to my rescue. The controller works fine so now I can play Mooncrash.

This is the end of my saga. Or is it only the beginning??

Steam and Prey and my Xbox controller didn’t want to cooperate. I tried messing around with my settings for a few nights before giving up.

It’s moot now, but typically when there are controller issues you need to disable Steam Input in the Game Properties. Did you try that? 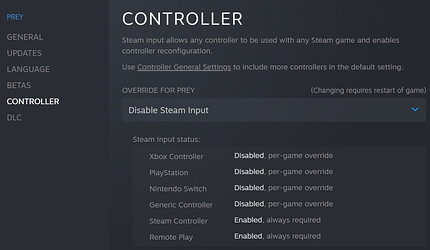 Hmm, I don’t think I tried that. I read some other solutions that didn’t pan out.

And not moot at all! I’d much rather run the game through Steam since that’s my default game library. I’ll try this later. Thanks!

No worries! I’ve been through the same thing with a couple games, though I can’t recall if this specific game was one of them.

I played Prey but not Mooncrash. Worth giving it a shot since it is free right now? Is there a campaign?

Absolutely yes. Not sure campaign is the right word but there’s a narrative attached to a roguelike structure.

After a long session playing Elden Ring last evening, I fired up Mooncrash to see what the heck it was all about.

I put a couple things where they belong on a high tech chair, then I entered a simulation, then I found a wrench, then I squashed a mimic with said wrench, then me and my wrench got squashed by evil monsters. Five stars! Will play again.

I think I picked up a few fabrication plans so I even made meta-progress. Mostly I’m just happy to be back in the world of Prey… what a cool game.

Yeah just did the first simulation mission. Forgot how cool the game is.

I played Prey but not Mooncrash. Worth giving it a shot since it is free right now?

Oooh, yes, it’s so worth giving a shot! Especially if you’ve already played through the main game.

Mooncrash was one of my games of the year last year. Granted, I’m late to the party AND I didn’t play a ton of games last year, but I loved the hell out of it.

Also worth noting that Prey looks great and performs really well on XSX.

Yeah, yeah, done, but just have to chime in that Prey was Excellent first 80-90%, one of my most favorite games of the year definitely, but near the end, the objectives and how to complete them is a convoluted mess! Overall very good, with lots of fun exploration! I’m eagerly awaiting a reasonable price for Mooncrash. Not there yet.

I believe it is as cheap as free on the Epic store right now.