I met the Sphinx last night and solved it’s riddles. Wow! That thing is cool looking. If you get them wrong, do you have to fight it? It was huge, I can’t imagine they coded a fight. I kinda wanted to though, to see what happened.

Looking forward to some more stuff like that. I have The Minotaur on my list, though the quest is level 40 and I’m not there yet. 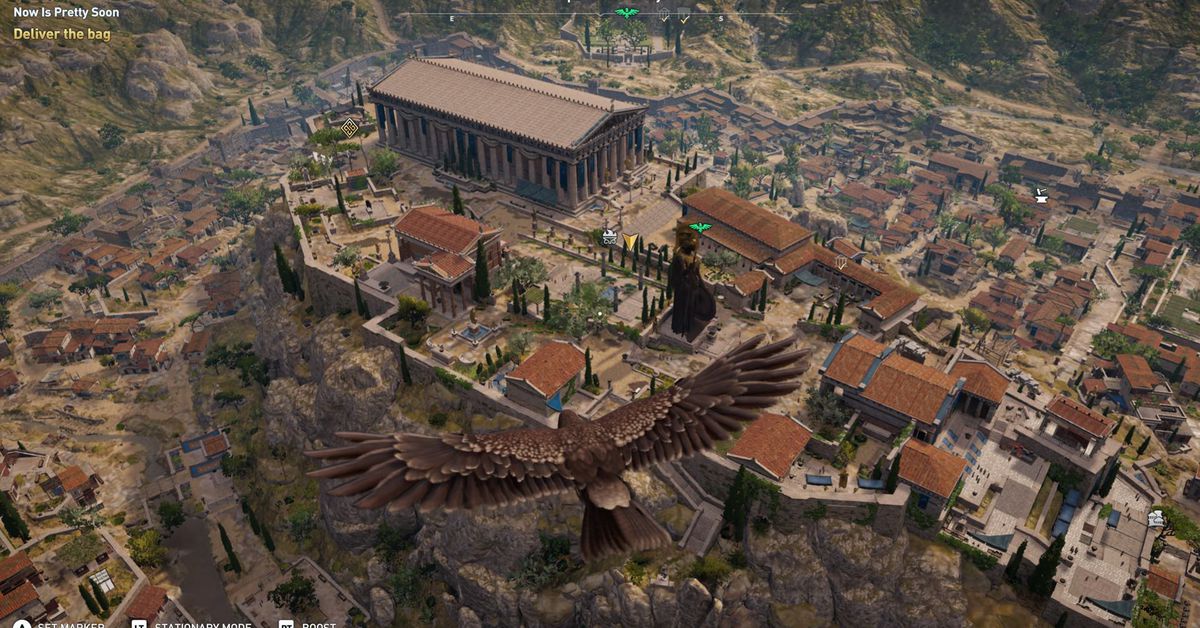 Assassin’s Creed Odyssey’s Discovery Tour is an inspiring journey through...

At the end of the tour, Aspasia greets me again. I can ask her to quiz me on the information I’ve learned. The quizzes are appropriately straightforward, aimed at students of all ages.

Discovery Tour isn’t merely interested in the great buildings of the past. I can also tour a family home. I can familiarize myself with the economic management of Athens’ port Piraeus. I can hang out with Socrates and get a primer on his grand philosophies.

It all adds up to a magical tour of a time and place that previous generations only saw through stuffy textbooks, or poorly researched (but fun) movies. Discovery Tour melds together solid research with a Hollywood sense of the spectacular, and of engaging storytelling.

One of my favorite parts in the game was speaking with Socrates. It’s impossible to tell how he really was, of course, but he fit the character in my mind’s eye very well. I wonder if Plato might make a cameo as that’s how we know most of Socrates actual discourses and philosophies, from his student’s writings.

Why are textbooks always “stuffy”? I have plenty of textbooks that aren’t stuffy.

It’s impossible to tell how he really was, of course, but he fit the character in my mind’s eye very well.

Apart from reading Plato and Xenophon, both of whom describe Socrates in remarkably similar ways?

Huh, i had never heard of Xenophon, I’ve read almost all of Plato’s works. He appears to have been a soldier turned historian.

Huh, i had never heard of Xenophon

He tried so very, very hard.

Xenophon was also a bit more than “a soldier turned historian”. Also, “soldier” is not a word I would ever use to describe ancient Greek warriors, not even mercenaries, as it’s anachronistic.

It’s interesting how the game keeps pushing me to upgrade the Warrior tree. I was hoping to stick with hunter/assassin abilities, with daggers. But many of the missions are flat out melee battles, so the shield-removing ability and spear become necessities. It’s still fun, just need to re-adjust how I play the game.

Infiltrating bases is still my favorite part of the game.

Also, I’m lvl 15 and haven’t done much ship combat yet. Unlike Black Flag, there isn’t a lot of open water to traverse (so far).

That tumblr is so critical of Xenophon, is that the joke?

I think it’s possible that the Socrates of real life is somewhere between Xenophon and Plato, rather than as so many philosophers assume 100% Plato and 0% Xenophon. Stuff like the theory of forms makes perfect sense to me as basically a handwavy Socratic defense of objective reality, that Plato later reused and expanded upon.

That tumblr is so critical of Xenophon, is that the joke?

No, the joke is that a lot of people are rather scathing about Xenophon – the only author from antiquity whose complete body of work has actually survived down to the present day. The creator of the Tumblr is a friend of mine, who is – unsurprisingly – a fan and admirer of Xenophon’s.

I read today that the typical Greek hoplite was about the height and weight of today’s fourteen year olds, about 5 foot 6 inches and 120 pounds. Kind of funny when you think about it.

I finally jumped in on this and I’m enjoying it immensely.
Didn’t think I’d have the nerve for it, since Origins got boring way too soon for me. But they managed to fix A LOT of the issues I had with Origins, and now I can’t stop playing.
The story is really interesting, plus I find myself googling ancient greeks to read about them more so I’M ACTUALLY LEARNING stuff along the way, which feels really nice (plusit gives my bad conscience a break every time I play instead of studying lol).

I love hunting down the cultists, that the missions are so diverse, and Kassandra.
Not a big fan of ship battles at all, and so far, I haven’t really seen the point of the war bit (other than gathering legendary gear, which I’d rather do by hunting cultists anyways).

They really succeeded with this one imo, and I’m still looking forward to play this every god darn day.
I’m at level 38 and have finished 50% of the story and let me tell you I CAN’T WAIT to start the Atlantis DLC =D

Yeah, Odyssey is a rockin’ good time. Well worth the investment of time and whatever you paid for it, IMO.

Finally did all the Atlantis DLC episodes in one go.

Tonally it is all over the place, from Persephone and Hades Greek mythology/historical fiction to sci-fi interpretation of Atlantis. Elysium and the Underworld are so much more interesting than the bland Atlantis. That (literal) cliffhanger at the end of Episode 1 is so outrageous I would have gone mad if I had to wait for a month or two for Episode 2 to drop. Luckily I play it post -release I can just go straight pass it.

The gameplay itself is more-of-the-same, except in Episode 2 and 3 the non-lethal option is more difficult, which is fine because it was a bit too easy in the base game.

All in all the DLC contents IMO are more of the same. The base game is already long and DLCs make it even longer (the 99 level cap makes it a grind). When it isn’t more-of-the-same it doesn’t really work for me (like Atlantis).

Discovery Tour is so dry imo the game itself is a better learning tool.

A learning tool full of mistakes, but still – better than nothing! :-P

I’ve been wanting to do a video of the Discovery tour with commentary, but I cannot, for the life of me, record any decent video with this game. Must be my PC.

But in short: I am rather disappointed that the Discovery Tour, as far as I have been able to tell, doesn’t once admit bits that are clearly wrong, or what things they deliberately changed for the game. Examples include the huge Clash of the Titans (remake) statues, the weird Knossos ruins (I can understand wanting to showcase the Minoan “palace” complex – even if the palace was long gone and the hill occupied by a temple dedicated to Rhea – but what are those huge stairs doing in the north of the central court, for example?), the underwater (!) Mycenaean/Minoan palace complex (mud brick walls don’t work that way), let alone anachronistic and ridiculous things like Greeks using banners and flags (recalling imagery ripped straight from a Leni Riefenstahl propaganda movie), etc. etc.

I can understand Ubisoft changing things for gameplay purposes, or even adding things to make stuff more familiar to modern audiences (like the Thermopylae tutorial that is taken straight from 300, the terrible “wrist handshake”, the forearm bracers, the ubiquitous Corinthian helmets that were actually seldom used after ca. 450 BC, the giant statues, and so on). But if they want the Discovery Tour to be used as an actual tool to teach people about Classical Greece, at least explain which bits are not historically/archaeologically accurate…

But in short: I am rather disappointed that the Discovery Tour, as far as I have been able to tell, doesn’t once admit bits that are clearly wrong, or what things they deliberately changed for the game.

Yeah I was kind of sceptical that ancient Greeks really made that 10 stories tall outdoor statue of Athena. Taller than Parthenon, really??? They could have just mentioned that it is artistic embellishment, but didn’t.

But Discovery Tour is soooo boring I wonder who would pay attention at all.

I was also struck by how much this Discovery Tour omits. The one for Origins had bits that specifically called out where designers changed things for gameplay reasons.

The one for Origins had bits that specifically called out where designers changed things for gameplay reasons.

I never got Origins, but that was good of them. I wonder why they weren’t so forthright with Odyssey then?

I wonder why they weren’t so forthright with Odyssey then?

Dunno; it’s all Greek to me.

Yeah I was kind of sceptical that ancient Greeks really made that 10 stories tall outdoor statue of Athena. Taller than Parthenon, really???

I wonder if this was the inspiration:

"The Acropolis at Athens" by Leo von Klenze – Joy of Museums 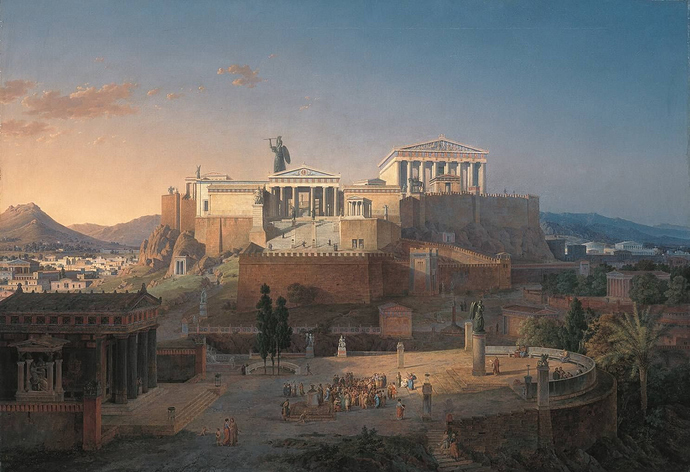 No idea whether von Klenze was basing that detail on anything other than his own fancy. I suppose archaeologists nowadays have a pretty good understanding of what the acropolis looked like in its prime.