Funny, I’ve never played a game in the series before but I am very interested in this one. I love the idea of a Classical Greek rpg. I also liked what I saw in the videos.

The only thing I find mildly amusing is the “this is SPARTA” kick.

First AC game in years that I am actually looking forward to. RPG additions sound good and Kass seems like such likeable protagonist.

I’m always game for another AC game! :)
Definitely looking forward to this one. Even with the knowledge that I’ll probably never finish it.

Even Assassin's Creed is a live service now

“The idea with Odyssey is to create new content every week so that it’s a [lively] adventure for the fans. So there’s always something new, something fresh and something they can discover and appreciate. We want this Odyssey to be living, to always be fresh, so it’s a different way to create games this way.”

When pressed for further details on what type of content would be released on a weekly basis, Corre was unable to give any further information. However, he said that post-launch content is, “planned for a long time.”

It’s likely these weekly updates will be relatively simple: a new challenge here (‘kill ten mercenaries without being defeated’), a new costume there (‘now you can dress up as Bayek’), perhaps with the occasional larger drop of new quests.

“What is important for us is the happiness and the pleasure of our fans,” he says. "We have always said we would create extra content they would be happy to pay for if it was something that was logical. When we create costumes or cosmetic items, you can choose whether to buy them or not. It depends on what you wish. It doesn’t change the balance of the game at all, which we have always been very careful about.

As if AC games weren’t long enough already. Jeez. I don’t need them to have longer engagement.

Can you imagine if every AC game had been the length of the first one? Around 11-15 hours? I’d be all caught up with the series by now, instead of only being on AC3.

That’s another turn-off for me, honestly. I only have room in my life for so many massive open world RPG-ish games, and they all seem to be turning into that.

I played 1,2 Brotherhood, Pirates, and Rogue. I would, potentially, like others but I don’t have the time for a 30-40 hour Ubi fest. God, the padding. I just want digital tourism.

If the GaaS stuff is like Origins, then it’s all good. The Heka chest stuff is completely unnecessary to play the game, and if you do decide to participate, there’s one free a day for doing an easy mission. Plus, the devs added a couple of free quests for everyone that act as prologues to the season pass DLC. Even now, there’s a rotating set of “Trials” missions to kill Anubis, Sobek, or Sekhmet.

On to other news!

Looks like Ubisoft is going to fill the void left by Bioware. Since they dropped all romance in Anthem…

You'll be able to make your Assassin's Creed Odyssey homosexual or even asexual, Ubisoft has confirmed with Stevivor. The sky is really the limit, Narrative Director Melissa McCoubrey said of the game's new romancing system. 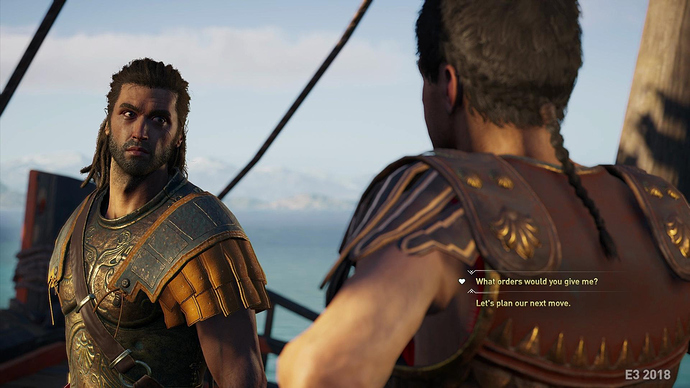 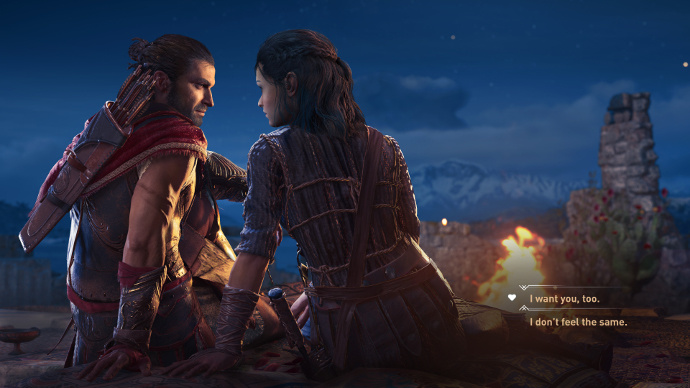 I think the romance option might be the one thing that would (sadly) make me see through an entire AC game to the end. If the story isn’t good enough.
I mean, Origins is mind blowingly beatiful and all, but after 100 hours and only halfway through the story, nothing really compelled me to stay. The story just didn’t stick with me at all.

I think AC is one of the few cases where filler is sort-of defensible. Virtual tourism is why I play the games, and even token quests can be useful for getting me to explore and soak up the atmosphere, without really having to worry about them as meaningful content. Also, most of the weaker AC content is optional and easily-avoided.

Of course, I wouldn’t object to Witcher 3-style consistent quality, and I think Ubisoft has slowly moved in that direction.

So… Lets do a poll, now that we can pick our main character. Who will you play as?

I think AC is one of the few cases where filler is sort-of defensible. Virtual tourism is why I play the games, and even token quests can be useful for getting me to explore and soak up the atmosphere, without really having to worry about them as meaningful content. Also, most of the weaker AC content is optional and easily-avoided.

AC: Brotherhood vs AC2 is a good case study for this. Both have a lot of filler material. In the case of AC2, I was bored out of my mind, going back and forth along the exact same scenery in Florence over and over and over. For god’s sake AC2, I’ve been through this exact spot over a dozen times now. First in Florence, and then the opening area of Venice. The level design there was one filled with bottlenecks, so if you wanted to get from one part of the city to another, you were funneled through the same areas over and over. In AC: Brotherhood, they had several routes to get from one part of the city to another, not just on the ground level, but on the balcony level, and the rooftop level. So when I was doing filler quests in AC: Brotherhood, it just added to the virtual tourism aspect, like you said. I didn’t mind that Brotherhood had dozens of hours of filler quests because I enjoyed exploring Rome for dozens of hours. They put enough historical notes and tidbits in there to always keep me engaged, and avoided bottleneck level design. It was pretty brilliant.

I think this looks great, but I loved the last (more RPG/open world focused) AC game so this looks like an evolution of that. I noticed the team has been working at it for 3 years so they must have been working fairly closely with the last time because the UI looks largely the same?

I enjoyed the 10 min video linked above, but they didn’t show off if stealth kills will once again just be a big damage bonus, but not instant kill if you are punching above your level? I assume that’s still a thing, but was curious all the same.

This is probably day one for me.

Yeah, at the very least, the filler content should be distributed appropriately. A lot of older open worlds are bad at this for some reason.

I hope they bring outfits back that have bonuses like they did in Syndicate.

I always pick a guy when available, but gonna make an exception here. Kassandra seems awesome, Alexios is ok but doesn’t stand out as much.

they didn’t show off if stealth kills will once again just be a big damage bonus, but not instant kill if you are punching above your level? I assume that’s still a thing, but was curious all the same.

They said there is no hidden blade in this one, so based on the way Origins handled it prior to Bayek getting the blade, I guess you’ll just knock people out when you sneak up on them. Or maybe in the distant past of the Peloponnesian War people knew how to use a dagger to kill people from behind?

Maybe you’ll just boop them on the nose.