I’ve always liked Ubisoft games and the company. I know every slags off on them but they’ve always seemed to be more in my wheelhouse than say EA or Activision. This seems to be in character for them, I think.

Yeah, this is a noble gesture of them. I don’t mind at all that it’s also a clever business decision.

The laser scans made of Notre Dame for this game are also said to be a boon in the restoration effort.

Afaik the laser scans were not made for this game, but were a separate effort to look into how the thing was constructed.

Typically, when thumbs-down ratings pour in and Steam’s chart-based review-bomb-detection alarms start ringing, it means a developer’s done something to earn users’ ire on a massive scale. Assassin’s Creed Unity, however, is experiencing the...

“Builder A: Are we really going to build a tomb under the pool?” said a Steam reviewer. “Builder B: Yeah, I think so. That’s what Ubi’s drawing says anyway.”

So I claimed the freebie and started Unity. The historic setting is always the #1 selling point of AC games and it didn’t disappoint. Going to Versailles, Bastille, and Notre Dame in quick succession in the beginning, and I’m spent. This is also a very old game, which plays almost like AC2, with tons of ubi busy work in a smallish city, and a map choke full of icons. There is a gear and skill customization game, that is different from older AC games, but not necessarily better or worse than Odyssey.

Oh as a game its definitely worse than Odyssey. I do like the setting. I turned audio to subtitled French, et c’est merveilleux pour mon Francais.

Goddamn was that revolution a shitshow.

I got AC Valhalla 2 days ago. I should be playing it. And yet, I’ve found myself still playing Unity these past 2 nights. The location and setting are so compelling and well realised that I just want to keep exploring Paris. Notre Dame, Le Louvre, La cour des miracles (beggars’ court), palaces and industrial districts. There is just so much to see. 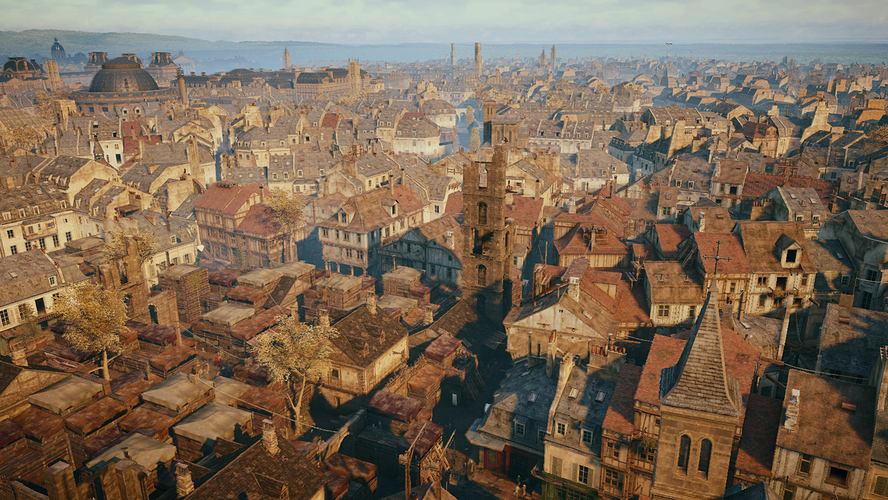 I also love listening to the revolutionary songs in my cafes. 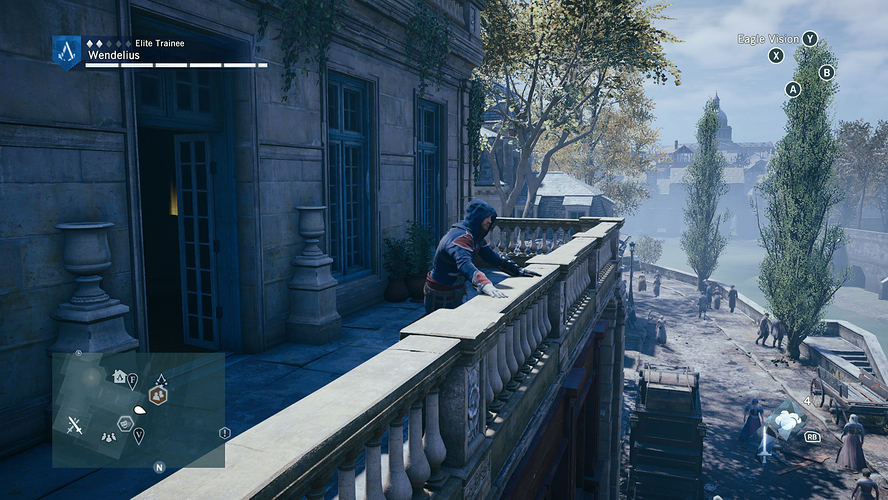 The game is full of busy work (map icons), so I now tend to only make small detours to open a chest or get a cocarde when they are on my way. It also has fun murder investigations, mysteries, Paris stories and the main storyline seems OK. The first server transition was an interesting surprise.

It feels very much like classic AC, harking back to the earlier days in the series. But it’s been fun diving back into that kind of gameplay.

Unity get unfairly dissed IMO because of the buggy release but what they pulled off with Paris was amazing to see. It was peak OG Assassin’s Creed.

Still my favourite building ever put into a videogame 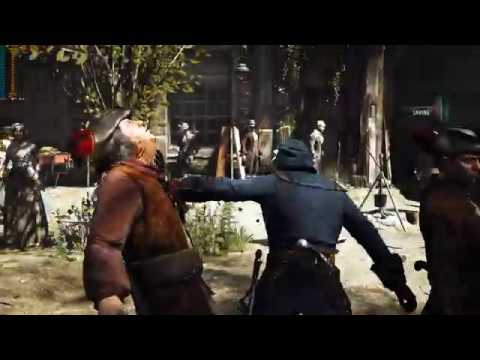 Unity still looks the best of the franchise. The prebaked raytraced lightning did wonders for it.

That and the app related stuff, I think. But, as far as I can see, that’s completely gone. No chests have been locked behind an app or 3rd party requirement yet.

The app link was removed about two weeks after the initial launch due to it not working correctly. Basically about a third of the chests on the map now were from the app.

I do think the game got a bad rap at release because of all the technical issues, but even after those were fixed - as pretty as Paris was and as neat as the setting was with the revolution and all, I never felt I was a part of the story. In AC3, it felt like you (well, Connor) was part of the Revolution. In Unity, if felt like it was all just backdrop. Which, I guess, is fine. Just felt like it could have been so much more.

I just started playing this and after the Leap of Faith to escape the Bastille, where Arno is on some rooftop near Notre Dame de Paris, I had this weird graphics glitch where there were vertical columns of light everywhere there were points of interest, chests etc. Anyone else see this in their playthroughs?

I think I figured out that the “light columns” thing I mentioned above is an aftereffect of “Eagle Vision,” but I’m being semi-vexed by a different problem, namely that Ubisoft Connect FKA Uplay is asking me to enter my Ubisoft password every freaking time I play, at least if I’ve exited and restarted UC. This does not happen with Syndicate, Origins or Odyssey. And BTW, this is a “bought on the Ubisoft Store” version of the game, so there’s no other DRM involved than whatever Ubisoft used.

Leaving UC on doesn’t help either if the computer has entered and come back from sleep, because it (UC) can’t re-establish the connection after that.

EDIT: After further research it looks like the game or its DRM doesn’t like IPv6, and supposedly turning it off in your router settings fixes the problem I described (I didn’t do this, because—>). If you just want to play single player and not co-op you can just put UC in Offline Mode and you’re in business.

I enjoyed reading this article this morning. 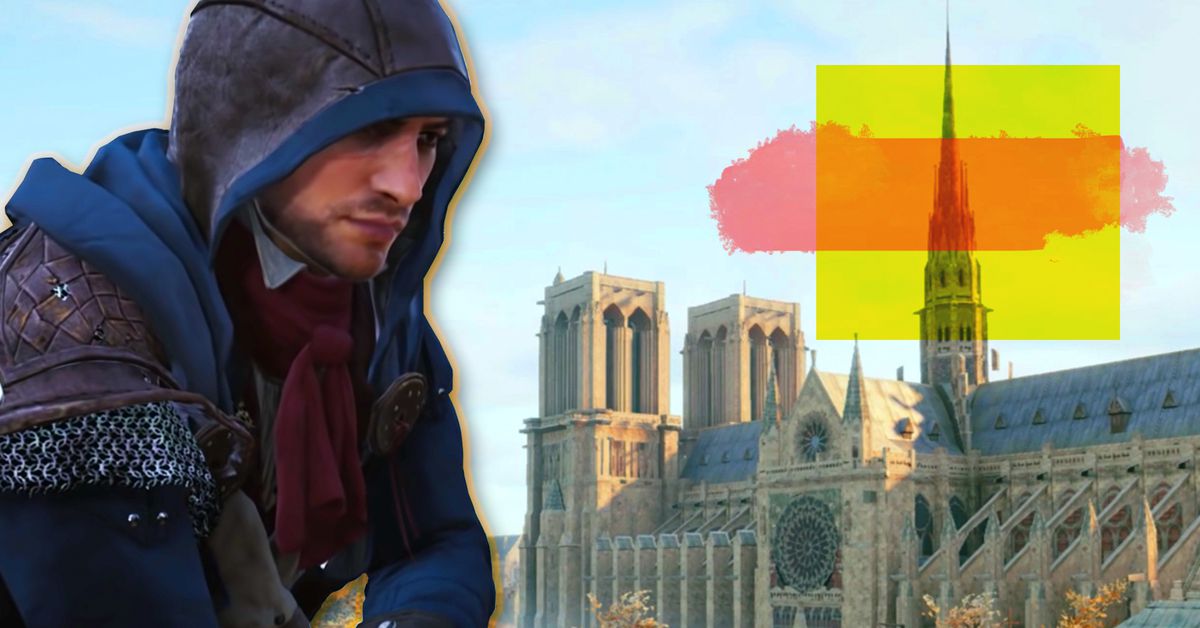 That’s nice but also a bit silly of an article - does the author think they’re going to use the in game levels designed for a game and not the detailed LIDAR-like scans they made to construct those levels to help model the interior of the cathedral? Apparently so, by the article, which means she doesn’t seem to understand the basics of what’s being done by indoor scanning, or thinks that the data created for the game is the only “deliverable” UBI could provide. It seems like the main point she has is that UBI didn’t actually scan Notre Dame, or at least, seems to be asserting this.

She does get to that later:

But aren’t there scans, or diagrams, or something behind those coherent visuals in Assassin’s Creed Unity ? Ubisoft declined to comment for this story, but from the research I’ve done, it seems that the development team worked mainly off of photographs and old blueprints.

The “millimetric” 3D models that do exist come from academia. One famous model of Notre-Dame was created by art historian Andrew Tallon. Tallon spent years laser-scanning the cathedral, gathering data and high-resolution images. And he wasn’t alone: Not long before before the cathedral caught fire, art historian Stephan Albrecht and his team had been scanning the transept, and making their own models.

Those two paragraphs are the meat of the article, at least regarding the headline.