ofcourse it could be driver issues and who know how any of these cards will do in DX 10.

It also has price parity with the GTS, though – this isn’t the high-end part.

So yeah, I was hoping that the R600 would blow the 8800s out of the water, but that doesn’t appear to be the case. Competitive, probably, but not dominating.

Isn’t it supposed to be about the same price (or better) than the 8800GTS, though? There’s still the R650 on the way, which is what’s really supposed to compete with the GTX, I think.

It’s still a little underwhelming in that it looked like it was supposed to crush the nVidia cards just based on the raw clocks, number of vertex/shader units, etc.

For some reason AMD thought integrated graphics was the next step in profitability. This was not a bad financial guess, but i think they overestimated their ability to compete with Intel’s integrated graphics chipsets price and availability; and now that Nvidia is the second largest intel MB chipset maker, the logic behind the move behind the aquisition seems more wishful thinking.

Although if this merger is the death of the two companies (not certain yet by any means), i think the fault will lie heaviest on the ATI shareholders and executives that pushed for it on their end. ATI was doing pretty well up to now after the initial lead of the 7800/7900 series was eaten away by time.

Yeah, we’ll all be so much better off when there’s no competition in the CPU and GPU markets.

Christ, you do realize that the company has been in a slightly disadvantaged position in it’s history, right? They have plans and I’m sure they’ll be fine. Sorry to take the 120dB out of your “DOOOMED!” screaming.

This makes you happy why?

You guys believe too much of what you read on teh intarwebs.

Some earlier tests showed very little difference between the XT and XTX though, with some board vendors saying they’re not even going to bother with an XTX model.

(Though we still need to see a full benchmark suite to see if it makes a difference at the non-full-detail levels instead.)

I’m worried about AMD going under too. If they lose money at the same rate as they did last quarter, they won’t even last out the year. Unlike Intel, they don’t have a huge warchest and marketshare they can burn up for a few years if they fall behind. K8L has to be successful in the fall or they are toast I think.

If Intel is left alone we are in a world of suck. It’s not like a company can just decide to build a fab one day and become a competitor in this business. Via is still in it with low power chips, right?

When are these supposed to hit the market? Or a better question, when can I expect (if at all) NVidia to do a price cut in reaction to the ATI release?

AMD was the first stock I bought about 10 years ago. It’s been a rollercoaster. It took forever for the average Anand/Tom’s fan to realize the extremely high thermal characteristics of the P4.

By the time the masses realized the AMD’s efficiency (and dozens of rumors that Dell was going AMD) it was too late - Intel realized the efficient Intel Cores.

It’d be interesting to chart chip introduction/performance with stock prices. However, just because a new chip is introduced doesn’t mean it’s making PROFITS - the boards have to be manufactured, the chips must be produced in volume, Dell has to make a box to hold them, etc etc. That’s probably what, 3 months?

Yeah, cause going back to paying $1000 for a minor mhz increase once per year is truly going to be awesome for consumers.

AMD is a large part of the reason why we have such crazy processors nowadays. Without them playing repeated rounds of king of the hill with Intel, we’d probably all still be using RDRAM and P4s clocked at 10ghz which don’t actually do anything. And cost $5000.

Oh come on, Jason, how can you not trust this guy: 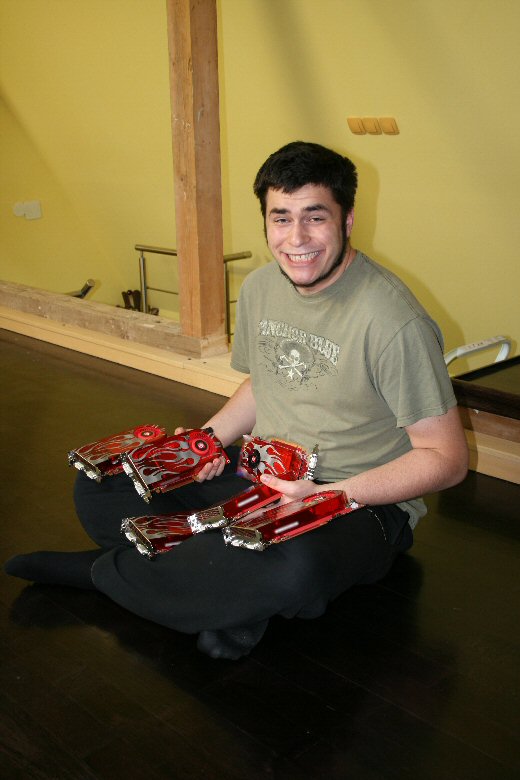 … and they say we’re not descended from damn dirty apes!

Sorry to take the 120dB out of your “DOOOMED!” screaming.

I’m not basing my prediction of their d0medness on the reviews for these graphics cards or their latest CPUs… they are already in a world of financial hurt and there is no indication that they have the ability to get out of it. All of their roadmap products, which aren’t that competitive even on paper, keep slipping and underperforming. This amuses me primarily because they got where they are by outmanuevering the entrenched giant and then once they achived their goals they sat on their asses and made many of the same missteps that Intel made that allowed AMD to capture a good chunk of the market. It is similar to the joy I feel watching Sony fumble on stupid mistakes after they grew to power capitalizing on other companies (Nintendo, Sega) making those mistakes. Watching companies drop the ball because they are unable to learn from the mistakes of the companies whose mistakes allowed them to get a foothold is pure comedy gold.

And yeah, if AMD does go under it sucks for consumers, but I don’t care because what have consumers done for ME lately?!

And yeah, if AMD does go under it sucks for consumers, but I don’t care because what have consumers done for ME lately?!

That is a lovely impression of a teenager!

It is similar to the joy I feel watching Sony fumble on stupid mistakes after they grew to power capitalizing on other companies (Nintendo, Sega) making those mistakes.

The difference being that Sony is the 300 lb gorilla in the console market - watching them stumble just means more competition which is better for the consumer.

Watching the only viable market competitor for Intel stumble has too many negative consequences to engender the same kind of schadenfreude.

AMD killed the 939 socket at the worst possible moment. I know of several people who built new machines for Vista/DX10. They had 939 motherboards, but AMD transitioned all its new chips away from 939. At that point, you had to buy a new mobo, RAM, and a CPU, and Intel is destroying them in terms of price/performance/thermal right now, so they all switched to Core 2 Duo. Keep in mind, they would have stuck with AMD if they could have just upgraded the CPU.