Audiobooks You Care to Recommend?

I’m looking for some great audiobooks to fill my ears over the summer. And by a great audiobook, I mean a good book with a good narrator. While the quality of narration is in the ear of the listener, your good opinion is what I am looking for.

Examples of Audiobooks I have Enjoyed:

Fantasy
A Song of Ice and Fire – GRRM - Dotrice’s narration is brilliant (Book 4 with John Lee, not so much)
Blackout/All Clear - Connie Willis - I love the female narrator in this book (great book, too),
The Black Company - this was surprisingly well narrated
Neil Gaiman – anything he actually narrates I will listen to. It’s a shame that most of his books are read by others
Jonathan Strange & Mr Norrell - Simon Prebble is a great narrator (the book itself is somewhat overrated)

History
1776 - David McCullough. I could listen to McCullough narrate anything

**Any good US Civil War audio books, history or historical fiction to recommend?
I am profoundly disappointed that Shelby Foote passed away before recording his Civil War series as audiobooks. That would have been Ear Food to treasure.

Anyhow, you get the idea. Genres I prefer are Fantasy, SF, historical fiction, history and modern politics.

Really nice reading of Howard’s sublime use of language.

The version of Shelby’s Civil War books that exists is pretty solid, actually. It’s not the man himself, obviously, but it is unabridged, and does the work justice. I enjoyed them.

They finally did an unabridged version of Team Of Rivals to coincide with the release of Lincoln last November. It’s…ok. The subject matter wins on an average job of reading.

I now have close to 130 books in my Audible library.

I think the single best set that combines brilliant reading, fantastic story, and amazing setting is the three (soon to wrap up at book four this fall) book series “The Monstrumologist” by Rick Yancey. A fellow named Steven Boyer–Juillard-trained, but also an occasional standup comedian–does the reading, and every actor aspiring to do voice work should listen to these. He’s brilliant beyond my ability to do him justice here. Be forewarned: The Monstrumology series is graphically descriptive–joyfully so–of human entrails, blood, etc. While I’m loathe to commit too strongly to such easy comparisons, it is sort of like Harry Potter meets Lovecraft.

Oh…and steer clear of the samples for the three Rick Yancey books. Each book starts with a narrator we’re supposed to believe is the author himself, discussing the diary left by a man reputed to be 131 years old, and the fantastic stories–which Yancey concludes MUST be fiction–located in those journals. That’s what the samples are, and they in no way give you an inkling for what Boyer has in store for you.

If you are looking for humorous essay type pieces both Bill Bryson and David Sedaris do wonderful jobs narrating their own books.

The Harry Potter books are narrated by Jim Dale and he does a fantastic job.

**Any good US Civil War audio books, history or historical fiction to recommend?

I don’t know where my brother found these, but there is a series from The Teaching Company that compiles the great lectures given from University professors. My favorite one that he had was title “The History of the United States”. This particular one is on 42 discs, with each disc having a one hour lecture by a professor. Over the course of the series, they go through 3 or 4 professors. The first one has a great speaking style and is ear candy. When it switches to the second professor, it’s jarring and I hated it at first, but I grew to like the second guy too because of the subject matter. And then the third professor is once again brilliant to listen to as you start getting to the civil war period and beyond. Overall I loved the series, and I loved listening to it in the car as I traveled across this country, imagining what the early settlers saw back in the day over those same hills and swamps and mountains. And then what people saw during the civil war. Great series, highly recommended.

The version of Shelby’s Civil War books that exists is pretty solid, actually. It’s not the man himself, obviously, but it is unabridged, and does the work justice.

Seconded. I love Foote’s voice, but he’s got that slooooow southern drawl, and it would have stretched this already-massive set of books out to thousands of hours instead of hundreds. The guy they got keeps things moving at a good clip.

The Road and All the Pretty Horses were well done.

The 25th anniversary edition of Ender’s Game was well-produced, as I recall. As was Snow Crash. Multiple narrators for both.

Will Wheaten (of Star Trek fame) is actually an excellent narrator. He can be found narrating some of Scalzi’s books (like Red Shirts) and Ready player one. Also Malcolm Gladwell does a great job narrating his books.

I really enjoyed the Vorkosigan Saga by Lois Bujold, read by Grover Gardner. He really brings Miles and a lot of the characters to life.

Those two series alone should probably last you a few summers. :P

If you can find them, Darren McGavin’s work on John D. MacDonald’s Travis McGee books set the bar for audiobook reading quality for me. However, I’m not sure that these originally cassette-based releases have ever made it onto a digital format.

More recently, Ken Follett’s Century Trilogy only has 2 of 3 books out so far (final book due in 2014), but I found the first two books very entertaining and well-narrated. For the first time in my life, I understand what WW1 was all about.

Also, echoing recommendations above for Jim Dale’s work on the Harry Potter books and David Sedaris’ readings of his own work.

I recently finished up “The Children of Hurin” by Tolkien and read by Christopher Lee. Lee (the actor who plays Saruman in the LoTR movies)does a great job with the narration. It’s a neat look into another part of Middle Earth’s history with a bit of Greek tragedy thrown in.

Among Others by Jo Walton is the best audiobook I’ve listened to. That doesn’t mean it’s a perfect story, but the combination of superb narration and story (helped along by a long standing love of science fiction) made it a joy to listen.

If you’re looking for speculative fiction, and have a history of reading science fiction, you’ll likely really enjoy it.

Among Others by Jo Walton is the best audiobook I’ve listened to. That doesn’t mean it’s a perfect story, but the combination of superb narration and story (helped along by a long standing love of science fiction) made it a joy to listen.

If you’re looking for speculative fiction, and have a history of reading science fiction, you’ll likely really enjoy it.

That’s the only audio book I didn’t finish. not because of the narrator. She is really great. But the story bored me to tears; until it started actively irritating me and I gave up halfway through. It is superbly read, though.

Also Stephen King’s Duma Key was a good one and an intriguing story to boot. Though not major King.

Finally, The Passage and The Twelve also stand out for their narration. But the books themselves can be a bit Marmite. The Passage is the better off the 2.

The version of Shelby’s Civil War books that exists is pretty solid, actually. It’s not the man himself, obviously, but it is unabridged, and does the work justice. I enjoyed them.

It turns out that with some googling, a fan of Shelby Foote has accumulated recordings of some of the chapters that Foote read in public (or at the least, deliberately recorded) before he passed away. This fan has integrated recordings of Foote’s readings of 16 chapters from his Civil War trilogy (Foote’s chapters are all from Vol II) into the main audiobook recording of the three volumes as read by Grover Gardiner as seamlessly as possible.

It will have to do. This one is definitely on my summer listening list.

I will look into The Monstrumology as well, given that its reviews on Good Reads are significantly positive and your opinion of the narrator is so high. Much thanks.

Dawkins has narrated several of his books and they are all enjoyable. I particularly liked The Greatest Show on Earth. There are accompanying .pdf files which contain photos and stuff that help you follow along if you prefer, but I didn’t even bother most of the time as I was travelling while listening to it.

Martin Amis, who was a close friend of Hitchens, has a ton of great stuff available on audiobook. Money, Time’s Arrow, and The House of Meetings are my favorites. London Fields is perhaps his most popular book and is also good.

My favorite damn book ever, Catch-22, also has a great audio version available. It’s narrated by Jay O. Sanders, the guy who narrated a bunch of NOVA episodes, and he does an absolutely fabulous job. I can’t say enough about it.

I recently finished up “The Children of Hurin” by Tolkien and read by Christopher Lee. Lee (the actor who plays Saruman in the LoTR movies)does a great job with the narration. It’s a neat look into another part of Middle Earth’s history with a bit of Greek tragedy thrown in.

Just found this thread and this recommendation is a real gem - belated thanks.

I have a bunch of audible credits that I need to use. I have read a lot of classic literature, as well as classic science fiction/fantasy - looking for recommendations on more recent (1990+) science fiction/fantasy/post-apocalyptic/end of world fiction. I have basically read zero fiction books written in the past 20 years other than some Crichton and Stephen King. 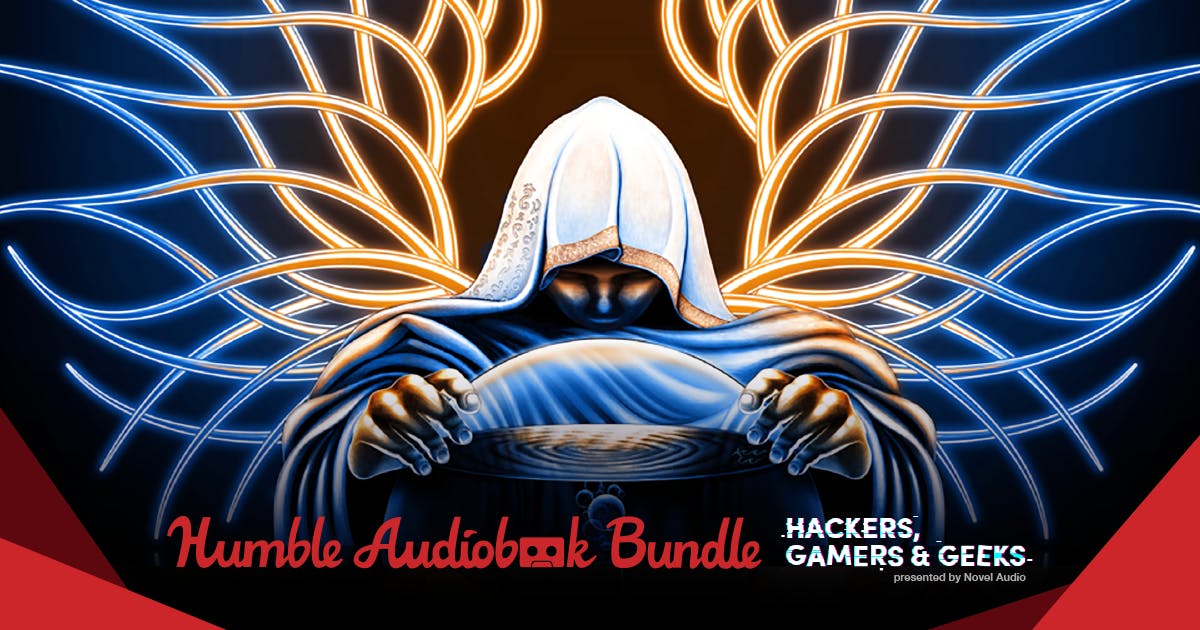 Pay what you want for audiobooks and support charity!

Can I ask a dumb question. If I buy this bundle, how do I get the files onto my iPhone to listen?

That looks like an intriguing bundle. Can those be imported to Audible? Or do I have to use a different app to listen to these?

If the latter, are there any good audiobook apps that basically behave like Audible?