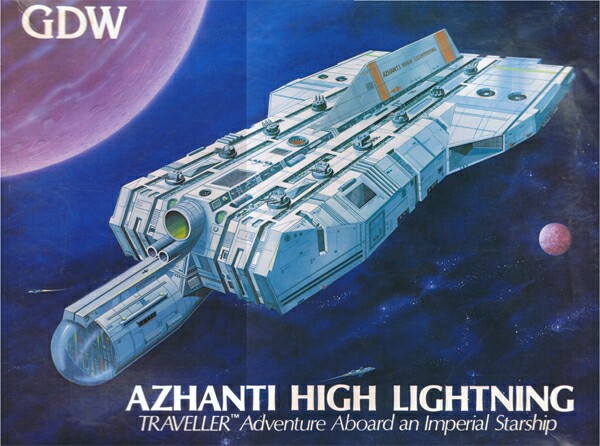 I was talking with a colleague about spaceship games, and told him I was particularly interested in games where you had to do things aboard a starship. He came up with a nice list for me that I've added at the end of this post..

Traveller! I loved reading those rulebooks. I could never get my old gaming group to give it a try because it put them off. The character generation process annoyed them, whereas I really liked the way you had to roll through your character's past before he or she got in the campaign.

Great stuff. Reminds me of my youth, gathering up all the RPG modules I could get my hands on and just reading through them. I loved that one D&D adventure, something about the Barrier Peaks? anyway it involved exploring a space ship full of aliens and strange technology, but everything was written and described in ye olde no-tech speak. I wish I had known someone I could have tried playing it with.

I have to take issue with one of your points, though. I don't think a starmap is inherently uninteresting, at least in comparison with a map of Middle Earth, for example. I get where you're going with that, but I got just as much thrill opening up the included map in Starflight, for example, knowing that every bright spot had some unknown number of planets, each patrolled by a strange race I had yet to meet, and full of cities and ruins and weird things that would thrill me. And all that dark stuff between them doesn't really have to be empty and boring - not all of it anyway. Could always have weird nebula like Wrath of Khan that would hose up your scopes, or asteroid fields like Empire Strikes Back that you could try to navigate or explore, or a space station waypoint where you can trade and meet weird green people.

That probably comes down to taste, though. I admit I'm somewhat biased against fantasy and in favor of science fiction. I love the idea of hopping in some kind of spacecraft and wandering the cosmos.

This is a great story; I remember distinctly grabbing tons of D&D modules (Ravenloft, and one about the Desert of Despair or something - I don't know, it had mummies) and Paranoia and Traveller sourcebooks and just reading about those other worlds - I never really had a gaming group to speak of, but I loved the fictions therein.

I've always been more of a sci-fi geek than a fantasy person; something in the sleek chrome of a starship - the lasers, the computers, the designs - just ignite my imagination. It's the coolest pirate ship, taxicab, tank, fighter jet, city, house, or apartment that I could ever have.

And I don't think there's any map - real or fictional - as brutally compelling as a starmap. The limitless, literally infinite possibility just boggles the mind.

This has been a tremendous series, Bruce, for a variety of reasons. Please keep sharing.

I never actually got to play Traveller in a group but I spent hours just rolling up characters. Which is sad.

Thanks, guys. I definitely hear what you're saying about star maps, but I think that game mechanics significantly dilute this effect for a number of reasons. One is simply a display issue: rotating maps, zoom level, and lack of "landmarks" (like nebulae, as Pogue astutely noted) homogenize the display into indifference. RPGs with their printed maps have an advantage. But I still think sci-fi games handicap themselves with uninteresting settings in order to give a sense of open-endedness that isn't necessary, or isn't necessary to achieve via that method.

Hm, the Old Man Murray link is dead (that makes me sad...) and what was your third footnote in reference to?

The Old Man Murray link works for me. The last footnote is about the Emperor of the Fading Suns FAQ. Google it!

Corrections:
"But within these 132 pages lived [a] simple but flexible 2d6-based system"
"two Traveller-sized booklets:- one with the rules"
"The[re] was already one GDW man-to-man combat game"
It looks like the Kagukhasaggan quote is missing paragraph separators.

The Wayback Machine has a record of this post:

The Traveller Map is a great example of a starmap that doesn’t suck or is boring. Not all parts but in particular the region known as “Behind the Claw” (Deneb and in particular the Spinward Marches.) This is because of a rare large-scale astrographical feature: the Great Rift, which acts as an almost-impassable desert or mountain range separating a frontier area from the heavily-settled heart of the Imperium. As well, lots of quirky interstellar national boundary areas bordering space claimed and settled by two major races (the antagonistic Zhodani and unpredictable Vargr) and within spitting distance of a third (the mysterious Aslan). What was interesting is that to me and probably many players this large-scale map came into our games long after the adventures set there, primarily in the Spinward Marches and Solomani Rim on the opposite side of the Imperium, both of which mapped their own sectors but nothing else. So we were already learning the history and lore by adventuring in these places before we were exactly sure of where they were in relation to the galaxy at large. At least for players like me, our experiences support your theory that it was the stories that made the games come alive, not the map.

I loved that one D&D adventure, something about the Barrier Peaks? anyway it involved exploring a space ship full of aliens and strange technology, but everything was written and described in ye olde no-tech speak. I wish I had known someone I could have tried playing it with.

I didn’t see that this was a resurrected thread. This comment jumped out at me, @divedivedive. Have you seen the walkthrough maps that Jason B Thompson did for WotC a few years back? He illustrated classic D&D modules in map form, and Barrier Peaks was one of them. So you can kind of vicariously play through it by reading along. 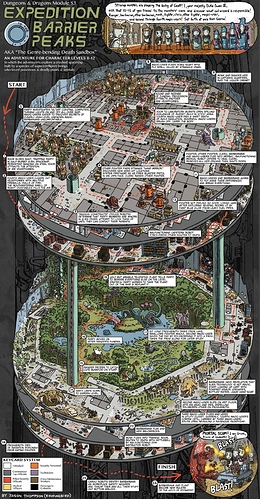 There’s a ton more, and you can order prints here: These art prints depict classic Dungeons & Dragons module as cartoon walkthroughs, so you can follow every step of the adventure. A beautiful addition to any gaming chamber or wizard's aerie. ©Wizards of the Coast.

Oh wow, blast from the past! I had to go back up and re-read my post, but thinking back on reading through that Barrier Peaks module was great, that one really grabbed my imagination and wouldn’t let go. But no, I’ve never heard of Mock Man Press, or this particular map. Definitely tempting, twenty bucks seems reasonable. Also, I wonder how much the actual module goes for these days? Off to eBay I am thinking …

You might check WotC’s site first. I think they did .PDF editions for free of a bunch of their classic modules on there.

Those cartoon maps went around social media several years ago when they were being released. You don’t have to order prints, just find hi res versions online- they were specifically created that way- the prints came later after they were popular online. The Barrier Peaks one, and its sister White Plume Mountain are especially excellent (and Ravenloft!).

Edit: Yeah, the cartoon maps are definitely on the WotC site (wizards.com), but they don’t make them easy to find. Dnd.wizards.com -> media -> cartoons -> search “walkthrough”