Huh, I didn’t even know you could unlock them in Evolve without paying money!

I’m down to try it again @tomchick.

I’m thinking having Mom in the party may be more useful than Doc? One extra incap would have spelled the difference for us last night I believe.

Solo is the worst mode to play, I think this was posted or at least mentioned up thread. 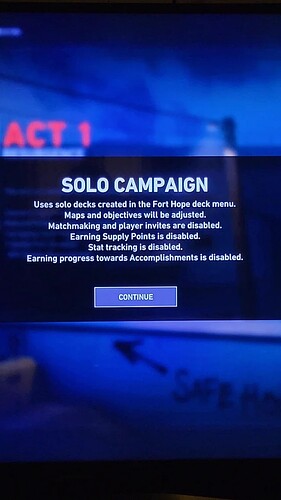 I’m thinking having Mom in the party may be more useful than Doc? One extra incap would have spelled the difference for us last night I believe.

I have really tried to like Doc. She’s my favorite “character” - she’s such a sassy, insufferable jerk. If she weren’t the only legit medical professional, I’m sure the other characters would just leave her to be worm food at some point.

But her actual abilities are surprisingly underwhelming.

She needs more free heals, more significant free heals, or much faster healing in general. Building a medic oriented deck to get the most out of her just doesn’t seem worth it – at least on the first two difficulties of play.

On the easiest, free heals from wall cabinets are so common that there is rarely a need to heal each other. On the middle difficulty, things go from “just fine” to “oh shit” so fast that there doesn’t seem time to play medic - especially compared to running some melee, health regenerating and temp health providing cheat code build.

If I’m understanding correctly that solo mode is simply a way to play with all the cards unlocked, there are 156 cards.

I’ve got 110 of them unlocked, and I’ve never seen a card that isn’t also in solo mode. At this point, progression for me is only partly the cards. I’m more interested in working my way through the difficulty levels to unlock checkpoints.

But all that stuff is in there! It’s just that you do it with your deck instead of your character choice. Back 4 Blood seems to be built to let you play a healer however you want to play her, and your choice of character is only part of that. Mom is a great healer for being able to carry more medkits, which arguably offsets Doc’s free heals. But Doc also offers trauma protection to the whole party, and that’s huge on harder difficulty levels, where trauma is a bigger problem than healing. You can deal with regular damage in the course of the level just fine by finding bandages, pills, and medkits. But trauma is a more-or-less one-way decline, and combating it will eat into your money. So giving everyone a free +25% trauma resistance from the get-go is going to make a big difference. Only Doc does that.

On the easiest, free heals from wall cabinets are so common that there is rarely a need to heal each other.

My feeling is that having a dedicated healer on recruit difficulty is unnecessary. Good for practice, of course, but if you’re just trying to beat recruit levels, you’re better off with a fourth offensive player than a dedicated healer.

Solo is the worst mode to play

What does it even mean that “stat tracking is disabled”. Am I missing a stat screen somewhere?

Last week I played with a friend on stream on the easiest difficulty, having started previous on normal, and it’s almost night and day in terms of the difficulty. I wonder if it was designed that way to force you to go up card unlocks first to get ones that give you more damage, weak point multiplier etc, just due to the number of spawns they throw at you.

I’ve been sticking with the starting characters, but I may start taking that one that auto highlights traps and specials and try to be the special killer on the team.

Last night we ran a few missions on the middle difficulty and had a noticeably easier time than when I’ve run these same missions with 4 damage dealing builds.

The passive combined with between combat healing abilities did make a difference.

I’m still a bit torn on Doc vs. Mom. I think Doc gets the edge on a long slog as that combined chip trauma adds up, but the extra revive on the boss levels favors Mom perhaps?

Either way, it’s never a bad thing to have someone running one of them.

How does the trauma mechanic work?

Trauma is damage which reduces your max health and can only be restored by a few limited means.

I’m still not entirely sure what causes trauma damage. Is it just a percentage of all damage? Is it strictly a product of special attacks? And I’m assuming it scales based on difficulty level?

Also, someone break down for me the difference between mobility and handling for weapons.

Mobility vs Handling
Mobility is the impact on your movement speed. Handling is how quickly you can manipulate the gun, it supposedly impacts reload, swap, and aim settling speed.

I just grabbed this off Gamepass earlier this evening. I’ve only played the first two bits solo so far so I’m likely to suck and not know what I’m supposed to do other than shoot zombies.

Ditto, grabbed it last night from PC GamePass. Ran through a few levels solo just to see what’s up. May be on tonight if anyone needs to be TK’ed

(that is a kick-ass random handle)

yeah thats a pretty cool number to get