I played through the first Act until I got to “the main menu”.

The levels feel a bit too open to me, and there’s often no real signal that you’re about to step somewhere that you’re going to fall off of and need help back from, particularly during that junkyard level or whatever it is. 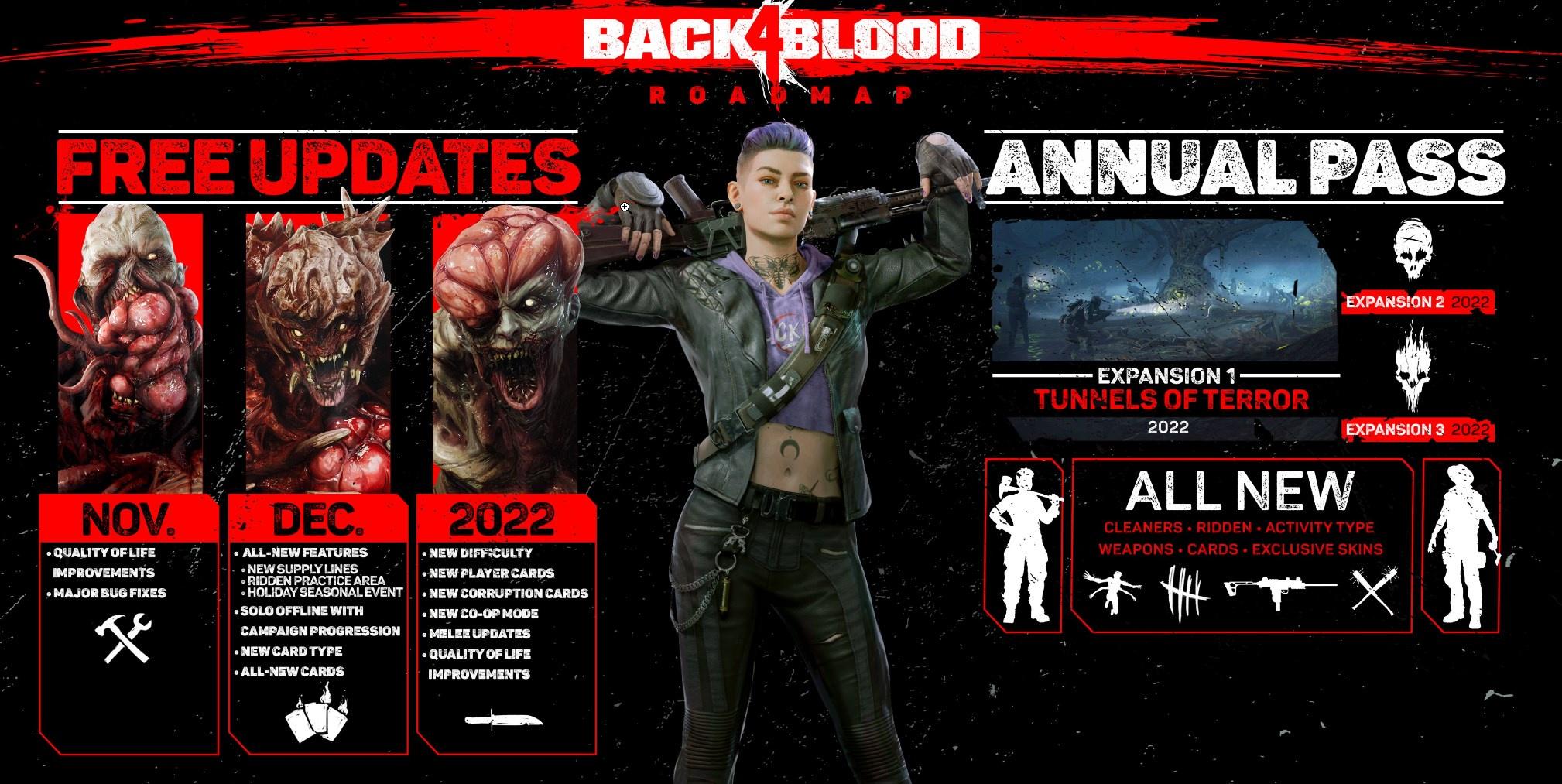 I like that we’re at the point that developers have to verify that “major bug fixes” and “quality of life improvements” are included in free updates.

I am a quitter , I uninstalled this over the past weekend.

Nothing added in them promised free updates makes me want to keep playing. And if anything you would think more free levels would be what they use to keep the player base active.

I see them offering new cards and I go meh.

It’s so dumb that they decoupled any kind of progression from the offline mode. Glad to see they’re changing their minds, but I’m not glad it’s taking them two months to implement it.

As for QoL improvements, they certainly have room for them! For me, the most surprising thing about Back 4 Blood was that it’s a deck-builder. The second most surprising thing about Back 4 Blood is that it has virtually none of the tools you would expect in a deck-builder. The card management stuff is the absolute worst. They couldn’t make it more of a hassle if they tried. I ended up keeping a spreadsheet to track the cards myself because the game itself was so frickin’ useless at it.

Otherwise, I’m all in for this stuff and I figure I’ll be playing well into next year. I’m still excited collecting the cards already in the game – I’ve got about 120 of 150 – so I don’t necessarily need new player cards. But I am looking forward to new Corruption Cards. There are plenty of imaginative ways they can shuffle the levels, and it feels like they’ve hardly tapped them. Just look at the crazy stuff you can do with cards that modify the gameplay in Aliens: Fireteam Elite. I’d love to see Back 4 Blood really flex the Corruption Card system. Right now, it’s great. It has the potential to be soooo much greater!

Some of that 2022 stuff sure seems vague. “Melee updates”? What does that even mean? “New co-op mode”? Huh? As for “new difficulty”, I’m wondering if they’re going to try to thread the needle with their existing difficulty levels, or if they’re just slapping one more harder difficulty level at the top. I’m guessing they’ll add a fourth difficulty level and then just redistribute the difficulty curve among four levels instead of three. Probably a good idea, but immaterial to me, as I’m pretty happy with how things are going with the bottom two difficulty levels.

Anyway, yeah, nothing surprising in this roadmap, and it feels a little chintzy. More along the lines of routine post-release support than anything worth writing home about.

I tried a few times with friends but in our brief play time we got stuck on the boat mission. Then a huge Deep Rock Galactic update came out.

If it stays on gamepass I’ll give it another go at some point.

Some of that 2022 stuff sure seems vague. “Melee updates”? What does that even mean? “New co-op mode”?

Some of the speculation I’ve been reading about the melee updates seems plausible - right now the explodey head zombies basically invalidate the vertical swing axes, it would seem logical to give the player a way to swing horizontal with them (and vertical with the bat/machete to reach the weak points on tallboys.) I hope this is true at least.

The timed-survival horde mode from L4D would seem to be a natural thing for them to crib; I wouldn’t be disappointed if that’s what they meant by new co-op mode as I was always fond of that in L4D.

I’m most of the way through Veteran mode now, with just the body pit and finale to do still. They seem to cut off the cashflow completely in Act 3 of veteran; we had a party with 3 money grubbers cards in effect and were going into the new maps with $500 each, which made it exceptionally difficult.

Developers’ note – We’ve listened to your feedback and implemented some highly requested quality of life updates. Follow along with our Trello board (Trello) to track upcoming new features, balance changes, and major bug fixes. Note that our Trello Board, and this list of fixes, are not exhaustive.

Anyone else try the PvP, I thought it was horrible. I believe I mentioned it up thread. :)

This reads like a lot of nerfs to melee with some buffs to enemies… and no buffs to cleaners to compensate. Someone who is better at the game than me please tell me I’m wrong. Right now my group is stalled out at the end of Act 1 because we need a 4th that doesn’t park itself in front of our sniper (looking at you, Evangelo bot). The difficulty felt fine for us as-is and it’ll be a tough sell to drag everyone back if they made it much harder.

Yeah, I’m not sure exactly who was clamoring: “Make the game harder!”

The money grubbers nerf definitely hurts - I had that as a early card in every deck. Most of the public random players I’ve played with mentioned they did the same. In hindsight, it’s probably a warranted nerf if it’s such a no brainer to take it, but that doesn’t make it any more appealing. It would have been logical for them to buff some of the other money cards at the same time, but no signs of that in the notes…

I’m certainly not looking for the game to get harder. I’ve been playing off and on very occasionally with friends and we got stuck on the bridge level last night, where you plant all the bombs on the ferry. Just couldn’t get through, and on the lowest difficulty. We just haven’t been able to get into a groove with this game at all.

Pipebombs or firecrackers help a lot with that stage (or any of the other endless horde stages - looking at you Acid Zombies fence pen stage in Act 3.)

You’ll definitely want to throw one right after breaching the propane tank wall, and again if you get mobbed trying to do the ferry bombs. It also helps to have one person stay behind and man the minigun to keep the top deck clear.

Anyone else try the PvP, I thought it was horrible. I believe I mentioned it up thread. :)

As someone who also mentioned the PvP upthread, and in a similarly disapproving light, I’ve come around on it. I think my problem was related to playing with people who had no idea what they were doing. Particularly since I was one of those people.

But now, having taken time out to figure out how the PvP works, I actually kind of like it? Partly because it’s short. It’s a lot less of a time commitment than any of the PvE stuff. It seems to me you’re supposed to bang out a PvP match in about five minutes. And in that five minutes, you’re mostly focusing on direct encounters with player-controlled specials, which is a good way to learn how the specials work. And you’re doing it by quickly bringing a bunch of cards to bear instead of gradually building them up over the course of several missions.

Furthermore, there are some interesting options for how to spend your mutation points on the neutral zombies instead of the specific specials. The match where I really came around I spent as a spitter, hanging back and sniping at the players while spending points to boost the horde zombies that they were mostly ignoring. As with the cards, there are some intriguing “build options” available when you’re on the zombie team.

It reminds me a bit of the multiplayer in ZombiU from way back when. We had a great time with that back in the day, so I can see spending some time with the Back 4 Blood PvP.

Yeah, the week after some friends and I started B4B we played some L4D (amazing, still) then carried on with Deep Rock Galactic and we just… well, ended up uninstalling B4B.

Despite L4D being 12 years old, I still appreciate the immediacy, balance and focus of its design, perhaps even more so now. It has so much personality, more distinct special infected helped by (much) better audio design, weightier melee, punchier explosions and the inertia from the zombies carrying their bodies as you take out their limbs still looks and feels great. Then there’s Versus, obviously. I really like the movie structure of L4D too (and the poster one-liners). I didn’t miss aiming down sights either, or a progression system (I still like the sound of the cards, on paper at least).

Maybe I’ll try out B4B again later down the line but right now the call of DRG is too strong for me and my friends!

we need a 4th that doesn’t park itself in front of our sniper (looking at you, Evangelo bot)

I know the feeling well! Did you spot the video I linked earlier?

Good lord, the Evangelo bot is a special kind of terrible. He glitches out on geometry, gets in the way and kills… well, nothing as far as I can tell. [Back 4 Blood - Bot Evangelo] This is more or less my experience so far with friends. I’ve watched him just stand there while I get dragged away. [2021-10-17 21_25_19-Greenshot] My guess is all the bots are that bad.

Yeah, I’ve got a soft spot for these kinds of quickfire PvP modes, like Doom Eternal’s battlemode and Evolve and Sea of Thieves’ arena modes.

Did you spot the video I linked earlier?

Ha, I linked it to my group as soon as I saw it posted :) 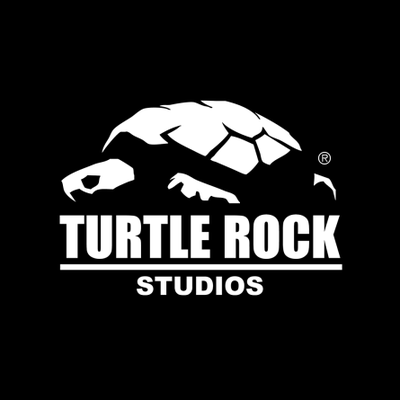 Turtle Rock Studios is Back 4 Blood🩸

@TurtleRock
Urgent! Please see below for an update regarding the November 2021 Update: https://t.co/90vSRS8hJL 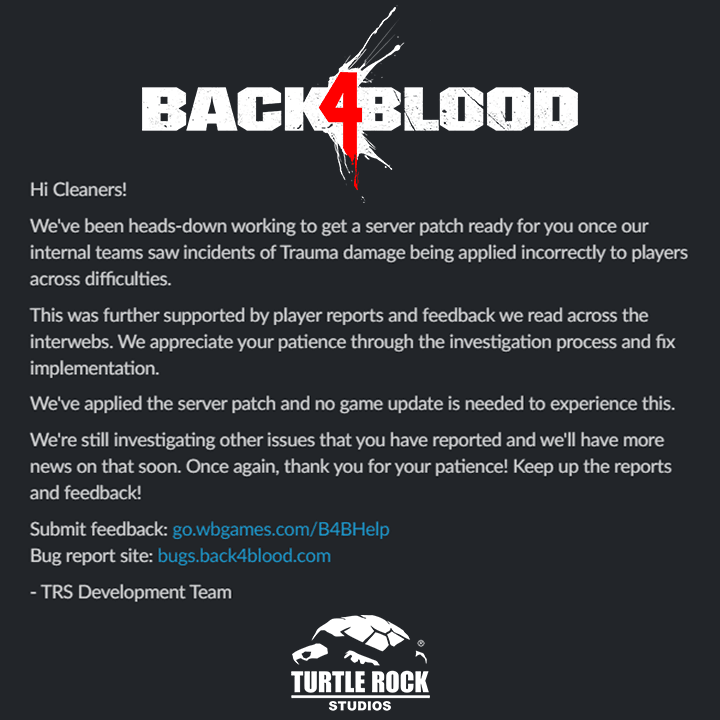