To me, it’s always been about having a deep pool to dive into when I’m looking to get into a new game. If I lock into one out of every four I try, that’s not too bad a ratio. Even easier with low-risk services like XGP.

Oh yeah, I forgot to mention XGP. Xbox Game Pass is one of the major reasons I think the game backlog suddenly stopped mattering to me. Now, there’s always something excellent to try/play at all times, no matter what I’m in the mood for.

I remember Christien saying something about looking at the list of books you want to read and realizing there is no way you will ever read them all. Hits harder now that he’s gone.

Wonder if there’s any software for tracking backlogs, progress, etc, and also one that would randomly recomend you pick one (so you do not have to decide).

Or if someone should make one, let me just patent the idea first.

Guess a spreadsheet… or text file, just use powershell to print out a random line.

Random Steam Game Chooser. Randomly pick a Steam game (which you have not played before) from your Steam account.

What Should I Steam?

Explore games from your own steam library, or discover new games to add to it! Popular Steam game picker and search engine.

Wonder if there’s any non-steam ones also. I guess there are some “game library apps” taht can be used, think I had one long time ago that I used for different emulators and stuff, maybe I remember what it was called and can use that.

Wonder if there’s any software for tracking backlogs, progress, etc

How it works - Steam Backlog, a Steam library organizer

They should add a Backlog feature to consoles that allow you to make a list of three games and lock you out of playing any other games for either a specified time (two weeks) or until you see the end credits of one of the titles on your list.

Maybe have it so you finish one, you can add a new one to list.

Nice. Sort of like the google labs feature they had in gmail years ago where you had to solve a puzzle or something before you could send emails in the middle of the night (i.e. drunk mailing protection).

I’m running out of stuff to play and eyeing the wishlist. What should I pick up - any votes? I’m just finishing Watchdogs 2 so maybe not another open worlder. Decisions, decisions :) Is Strange Brigade much good solo? Infra quite appealed but I’m doing so much work on my own home, it seemed like it might be annoying :) 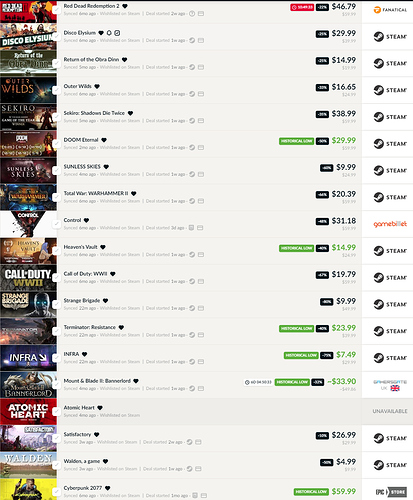 I’m running out of stuff to play

I’ve played: Red Dead Redemption 2, Disco Elysium, Outer Wilds, Control and by far the one I enjoyed the most is Control. The action was good, the story and environment were very good. I really didn’t have anything I didn’t like about Control.

The other 3 had aspects I liked, but I didn’t stick with any of them. Their positives were all very good but the negatives just made it too much of a chore.

On one hand I’ve heard a lot of good things about Control, on the other it looks like a brutal concrete office - my own special hell :)

Is Strange Brigade much good solo?

It wasn’t awful, but it’s clearly tuned for group play. I found it kind of empty and tedious and wandered away after a few levels.

The best deals on there are Outer Wilds and Walden (yay, Walden!). They’re also both open-world games (albeit unusual ones), so if you really are looking for something else, then I think the no brainer is Return of the Obra Dinn.

I’ve been enjoying Control too, but more for the atmosphere than the gameplay, which is cool for awhile, but for me has started to lose its luster after five hours or so. I do appreciate that it doesn’t overwhelm you with combat most of the time. Fights are relatively small and manageable, with much-appreciated lulls in between for just exploration.

Thanks - I think I’m tending towards something brainless though. Obra and Walden seem a bit worthy for right now :) If not Control or Strange Brigade, maybe Doom or Terminator. Or even the COD.

What should I pick up - any votes?

From that list, I’d definitely go for Cyberpunk right now.

Oh, yeah, then maybe it’s not time for Obra Dinn. Sounds like what you want is DOOM!

Depending on what timezone you’re in etc. I wouldn’t be adverse to some Strange Brigade coop if you get it.

Qt3 really should have an ongoing “looking for coop” thread. I started one a while back but people didn’t seem too interested. Posting something like that in a particular game’s thread seems silly to me because in there people are talking about all aspects of the game.

I will let you know if I go down the Strange route.