With Nebuchadnezzar coming out on Wed this week I aint interested in all that stuff. But boy there is a lot of stuff!

BundleFest continues on Fanatical with a Build Your Own Anime Bundle today. 18 titles to choose from at 2 for $9.99, 3 for $13.99 or 5 for $19.99. I don’t know anything about how good some of the titles might be, but several of them are at 90% or greater discounts as part of this bundle.

Also just launched (or perhaps re-launched as it seems familiar) is the All Stars Bundle 13 for $2.99 which includes:

Humble has a new Plug In Digital Bundle with three tiers:
Pay $1 for Steam keys to:

I don’t know anything about how good some of the titles might be, but several of them are at 90% or greater discounts as part of this bundle.

A few stick out:

I don’t know if they’re good or not, but definitely cheaper than they were on Steam. Had a couple on my wishlist so I might bite later. Gal Gun is very NSFW.

The Letter is quite good, if a little awkward in translation occasionally.

Fanatical has a build a VR bundle. I picked up 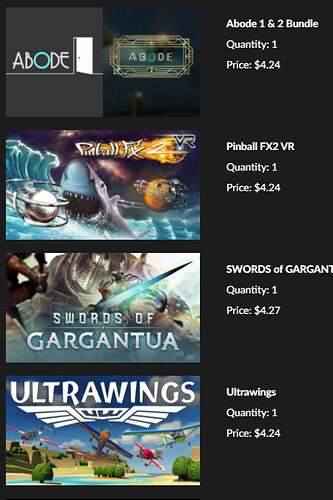 Dicey Dungeons is $5 on Steam until tomorrow (~16h remaining).

Imperator: Rome and HOI4:Cadet Ed are $6 each on IndieGala.

Edit: so I posted this in the wrong (2020) thread by mistake because I had it bookmarked, but Discourse would not let me re-post it in the 2021 thread until I edited the deleted one. I do not like this annual topic rebooting convention.

Discourse has a hard time handling giant megathreads with many thousands of posts, so we were gently encouraged to switch up every so often when the transition was made.

I’m pretty sure some of the older forum software would just start eating random posts when it got upset or even just crash.

Not a bargain on games, but did anyone bite on the Mega Music Collection (Royalty-free bundle) from Fanatical? It’s meant for YouTubers and streamers. Don’t know how long it goes for. All the music seems to be by one guy with a Russian-sounding name-- thought I’d mention it in case someone wanted to check it out. $1, 10, and $20 tiers.

did anyone bite on the Mega Music Collection (Royalty-free bundle) from Fanatical?

I didn’t but I did listen to some of the samples. Not bad.

Any recommendations? I’m tempted to add a Combat Mission to my backlog and probably never play it. Which is better? Shock Force 2 or Black Sea?

Have you played Battlestar Galactica Deadlock?

I did notice Deadlock is on sale today, $7.99. Kind of looks like that Battlefleet WH40K game, pretty good?

Yes, I have it and it looked like my cup of tea… but never clicked, and I tried, seriously.

WEGO space battles in 3 dimensional space, with a fantastic replay feature for battles that perfectly captures the aesthetic of the new series space battles. Solid and engaging tactical battles with decent variety.

If you have any enjoyment of the series and strategy games, you owe it to yourself to try.

Yes, I have it and it looked like my cup of tea… but never clicked, and I tried, seriously.

That’s a shame. There are a number of us here who love it, but that happens I suppose.

It was my favorite video game I played last year, by a significant margin. What didn’t work for you, if you don’t mind?

Yes, it’s a shame because I really wanted to enjoy it, and I’m glad the game exists! But not worked for me.

I think my main problem was the combination of the emptiness of the space setting and the wego system that felt too slow and samey and ultimately boring.

I’m realizing that in strategy games I’d prefer mountains, lakes, cities, forests, etc. It may seem silly, but I can do nothing. And I’m glad you asked because made me wonder and now I can see why I bounced other games like Space Rangers, Drox Operative, Endless Space and wow! a lot more!

I didn’t like it either. I only ever advanced in a blob and focussed fire on a target as far as I remember. And advancing has to be done ship… by… ship. Camera shaking replays didn’t fix that for me.

And advancing has to be done ship… by… ship.

You can group select! And it will hold relative position. So I might have 2 flight groups for fighters, two staggered formation capital ships, and a floating scout/ decoy. I can select my group of 3 capital ships and move them in formation. You can also filter the drag select to pick only fighters, only capital ships, or all ships. So once you have formation, you can move your entire fleet in seconds, if you’d like to leave it as is.

Maybe this wasn’t in the game at launch, I only played it last year for the first time. And friendly fire can be brutal, so thinking of positioning and which ships to place as shields, how to get firing solutions first, and when to break a formation all felt engaging.

And there is effective formations, rather than a blob. Especially important if you use missiles or fighters, as flak can destroy your own fighters. A blob would lead to my missile boat ranger firing into the rear engines of an Adamant, or through a flak screen. Or would see them taking the focus enemy fire, and get blown up.

Plus firing fields matter. Being above or below an enemy has significant real impacts, some ships lose a lot of effectiveness if you are at the wrong zone.

felt too slow and samey and ultimately boring.

I wonder if the extra ships from the DLC packs really helped. A few more ships leads to a lot more tactical variety. I can see how having more battles against Nemesis and Atlas ships well into the mid game, without unlocking some of the more interesting mid tier Cylon ships, could feel samey. There is definitely a exponential growth in engagement and variety from simply adding a few more ships.

I do wonder how much the game evolved over the years. It is entirely possible that there is some improvements they made to the core game engine that shaped the experience for me. Were there gas clouds, nebula, and asteroids in the game when you played? Because the game currently does have some (unrealistically dense) space terrain in it now. And playing in a mine field around an ionized gas cloud can have huge implications to how an evenly matched battle plays out.

But I do get the preference thing. The barrier for a fantasy game to hold my interest is vastly higher than historical or sci fi. It’s why Napoleon Total War is much more enjoyable than Warhammer, even if the later is probably ‘objectively’ a better game mechanically.

Were there gas clouds, nebula, and asteroids in the game when you played?

Plus firing fields matter. Being above or below an enemy has significant real impacts, some ships lose a lot of effectiveness if you are at the wrong zone.

And all those things sound amazing, but at the end didn’t work for me.

Were there gas clouds, nebula, and asteroids in the game when you played?

I don’t remember those things, I bought the game at release, but don’t think they would make a difference for me.

I can see your enthusiasm of some who really likes the game and want others to enjoy it, I really appreciate it, but somethings there are games/movies/shows/books that we can simply enjoy even if we try it really hard. And life is too short and the backlog too long ;)