Cat Quest 2, has the purrrrrrfect discount over at WinGameStore (75% off) now at a $3.74 sale price. Following the phenomenal success of CAT QUEST, developers The Gentlebros return to the world of Felingard, a fantastical land under threat from a continuing war.

Oof. I second the thanks on this news. I too had bought a bunch of stuff from them, although in the last couple years it was mostly music, and I don’t think I even visited the site in the last year. I didn’t realize how much those bundles added up.

What a pain this new game they published called Groupees Dump is. Every so often you’ll try to claim a Steam key and find out it’s no longer good because someone else used it. Or go to claim something from a partner site only to find that site is no longer alive. Business is hard.

On the Groupees chat, someone posted a link to a utility that’ll let you control downloads of the files. I’ve not tried it yet but it might be useful.

Doom games are on sale on Xbox. Very tempted to get Doom Eternal Deluxe edition for $23. I know I already have the base game through Game Pass (and I bought the base game on Steam for full price when it came out), but just getting the two expansions for $23 would be a good deal by itself.

If you missed the IndieGala mini PDX bundle, Humble now has basically the same pack (Planetfall, PoE, Battletech, Knights of Pen and Paper) + Shadowrun Trilogy for $12 (+$2). These are pretty much full game plus DLC for slightly older turn-based strategy modern classics.

How’s the Groupees dump going? I finally finished mine. If Humble, Fanatical, or Steam ever go under, I’m screwed because this was a bunch of bull I’d rather not go through again.

I gave up. I just don’t have the time or mental bandwidth.

I gave up. I just don’t have the time or mental bandwidth.

Ah well. All earthly things end up as their constituent atoms eventually. ;-)

I dread the day when Gaben dies and his heirs decide to take Steam public, because you just know the bean counters are going to start charging some kind of “maintenance fee” for keeping track of your library and letting you download/install stuff whenever.

It’s no big deal, I’d not thought about Groupees in years, so I doubt I’m missing anything important.

PLUS ALL THE BEST GAMES ARE STILL ON DISKS MOTHERFUCKERS.

LOL you know it…and so do those guys paying big bucks for old games on eBay.

Oh don’t I know it. Part of my latest project: 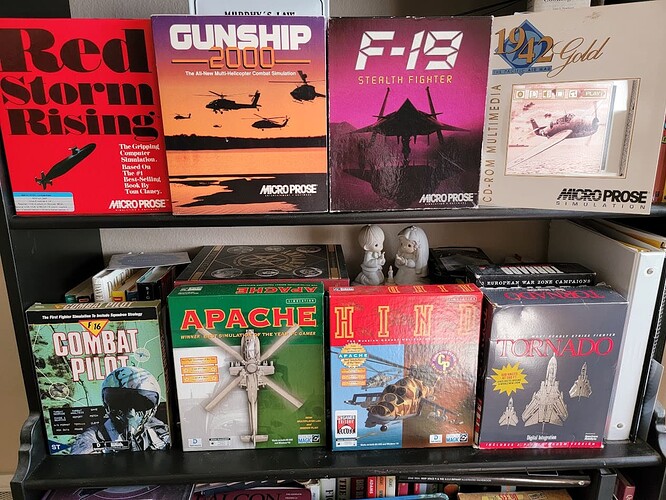 I only keep boxes with the cool stuff in them, like big manuals, maps, etc.

I started consolidating boxed games, so I’ve got like five games in one box. I tried to do it logically, so I’ve got a bunch of Jedi Knight games and expansions in one box, stuff like that. It made sense at the time.

Most of my games on disk aren’t in boxes at all, but in revisiting all these old flight sims, I realized the joy it would bring me to have them in boxes to decorate the room I spend dozens of hours in each week. Especially since I plan to keep streaming many of them.

First, nice photo of the collection!

Like @Rock8man I had a large collection and both it and I had to suffer several moves together. In recent years I decided I’d had enough, realized I was at a point in my life where there was more behind me than in front of me, and that most of those games I would never install again.

So I have been auctioning them off and donating the proceeds to charity. This has been good for me in two ways. Obviously I’m unloading a lot of physical cruft, but I’m also happy knowing the money helps others.

Most of the good stuff is gone now, leaving me with a couple boxes left of two kinds of games:

Sorry to derail the thread…uh, ok, here’s a StoryBundle with game books!

I flattened all my old game boxes and saved them. I thought maybe I’d do something wtih them one day, but so far nada. It did allow me to get my game CDs and flattened boxes into a tub.

I also sold a bunch too. I just had nowhere to go with them and like Bernie, realized I’d likely never install them again.

Back to bargains. There’s a new Slayer bundle out:

One of the games is Ogre. Looks like a faithful port of the old board game. Anyone with any thoughts on it?

Darn. I was hoping Slayer bundle meant a bundle of games in which you slay things. But I guess it’s more of a metaphorical slayer bundle. As in, this bundle slays dude.