Puppygames must have found some money because this was announced back in 2014, when they hated Steam and its Customers, so almost 4 years later they have now released Baskingstoke.

They will probably hate me, but I think they priced this $15 too high for the current Steam environment filled with thousands of games now.

They have kept posting in their blog ever since the meltown back in 2014, glad to see they got it figured out.

Some streaming game play here, I like what I am seeing overall… Some NSFW language in the video.

Sadly it looks like another one of those too dark games. Really I dont find squinting at the screen much fun. Anyone bought it know if you can crank the gamma so you can play it and see stuff?

Was going to post about this! Hoping to pick it up soon.

Oh and here’s the itch and GOG links. Come on kosc ;-) Basingstoke is a tense roguelike that mixes stealth and arcade action. Explore the smouldering ruins of apocalyptic Basingstoke, UK, a world of extreme peril where reanimated undead and ferocious alien monsters roam! Scavenge and Craft Loot and craft...

why would hairspray and chili sauce do anything to zombies? the reason those work on humans is pain.

@geggis I request a report! I am thinking of picking this up for the weekend.

Going to play a bit more in a moment then I’ll get back to you!

Okay so this is really cool so far, in a lot of ways. I just died for the first time because I vaulted a fence (accidentally – more on this in a moment) and got electrocuted by a light I’d just bust up. Like this:

The presentation is as typically slick as you’d expect from Puppygames and the game’s brimming with personality from the amusing items and unnerving sound effects to the dynamic camerawork and atmospheric lighting.

It’s got design smarts too, like your torch drawing the camera out so you’ve got more visibility in addition to better lighting. The torch beam also reveals loot on corpses and in containers but makes you more conspicuous to enemies. I don’t think your torch runs out of juice either, or at least this one lasts longer than the pathetic torches from the future.

I like that you don’t have to press a button to pick stuff up or open doors or interact with things, it just does it when you walk up to them. I like that when you hit tab to see info on the item you just picked up you can press tab again and it’ll go to the next item you perhaps didn’t look at earlier because you were too busy sneaking around or running away. It’s a great way of ensuring you don’t miss things.

When you’re cycling through your items the game pauses too so it gives you some breathing room to choose the right gear for the moment and formulate a plan. I found with Teleglitch that cycling your long list of weapons and items when under pressure was often a death sentence.

Crafting is also very unobtrusive because the craft icon only pops up if you’ve got enough materials to actually craft something.

The tutorial/intro to the game is perfect and is surprisingly tense and atmospheric. Right now I’m doing a lot of sneaking but I feel like I’ve also got the tools to get out of sticky situations. And I keep getting more tools. I could perhaps be more ballsy but I’m still feeling out the sensitivity of the enemies.

My only real issues with the game at present are minor: I wish the encyclopedia was a button I could press on any item in my inventory rather than its own separate list to consult, and I wish vaulting wasn’t quite as easy to do! I find I’m constantly throwing myself over obstacles accidentally when I only mean to walk past or up to them. My first death was a result of this which was quite annoying (but it does give me a chance to check out the proc. gen.) I think perhaps a brief progress bar before the vault would be a sufficient buffer to prevent accidents without making it a clunky discrete interaction.

Anyway, if you like the sound of Teleglitch meets The World’s End by Puppygames, then Basingstoke is totally worth checking out. I also laugh every time at ‘Basingstoke’. I did with Revenge of the Titans because I think the invasion starts there!

More feedback to come I’m sure!

I picked it up, I have enjoyed every Puppygame release to date. I used my humblestore 10% off and some credit I had there. Gonna give it a go this weekend. :)

Blimey, some of the later sections of levels are crazy built up with enemies. Don’t fritter away your resources and insurance policies are worth investing in if you’re able to grab one before things start hotting up.

A few things I love: 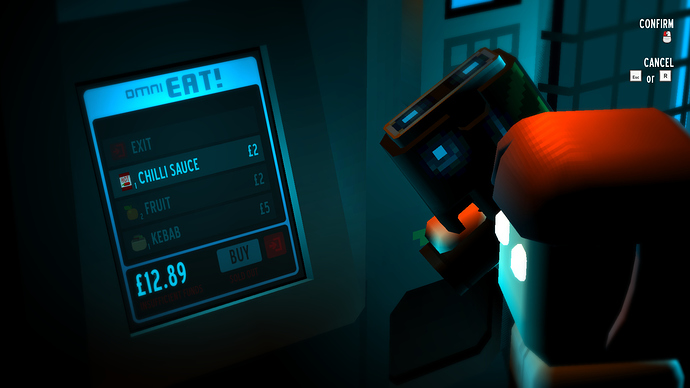 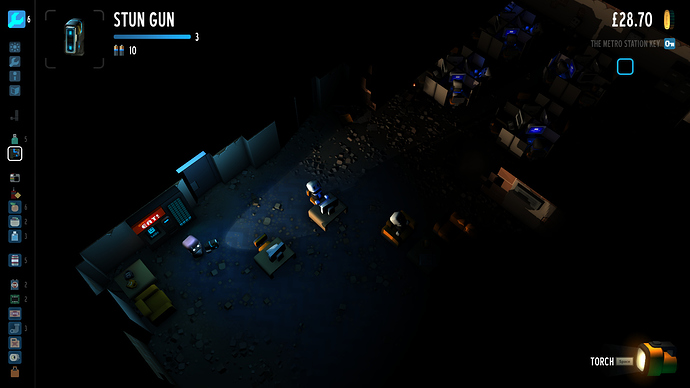 First free content update is out. Also this is 34% off during the sale.

A 75% off coupon for Basingstoke showed up in my Steam inventory (“for all Puppygames supporters” or something). Whats the verdict on this? Will I like it if I loved Teleglitch?

Edit: Oh yeah, previously reading Geggis’ endorsement incepted me with that Teleglitch comparison. Will check it out.

Basingstoke involves a lot of sneaking around and working out how best to deal with different situations, but with the muscle and necessary tools for action when things go wrong. I thought it was great and hope to return for another playthrough with a different character at some point. I found out a few things towards the end that will change how I play in future too.

Glad to see folk picking it up now; Puppygames deserve success with it.