@BFBulletin
To clarify: #PS5 and #XBX|S players can't play together "without the PC players" via #Battlefield 2042 cross-play functionality. If you op out of cross-play, you'll only play with players "of your platform". Via @PartWelsh and @Straatford87. Thanks @KellieLyttle @GetGoodGuyYT. https://t.co/1CzZMTTOrQ 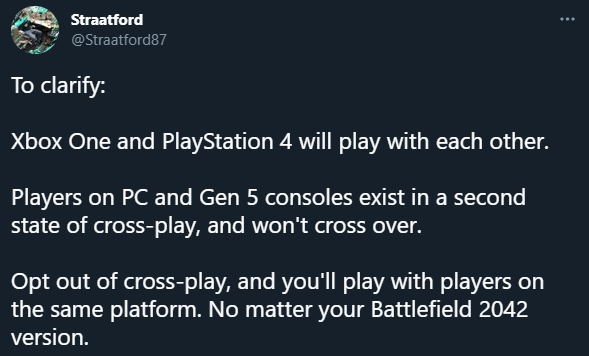 That’s normal. Works the same in all the hig crossplay games now like Warzone, Apex Legends, Fortnite, etc. You either play with everyone or your platform peeps. There has never been a consoles or PC option like that I’m aware of.

1 more day to officially find out what the heck Ripple Effect (DICE LA) has been working on.

I am guessing more of tornado and level-ution or whatever they call it. I am hoping for more raw gameplay.

No, they are working on a different game mode.

I wonder if they really have pulled off the hub thing that folks have been speculating about.

I haven’t been keeping up with the speculation. Been playing a lot of Warzone. I wiped two three man teams by myself last night in a couple games. I’m ready for 2042. Training near daily. :)

Nice! Did you start the game solo or lost teammates/they were too far to help?

The thought is DICE LA has been working on a Battlefield Hub that will have maps and bits from older games to play with in the BF2042 engine. The love letter to fans has been doing a lot of heavy lifting. :)

Reddit discovered a BC2 map, Valparaiso, in the trailer:

@BFBulletin
It looks like Valparaiso might be returning to #Battlefield 2042 as one of the fan-favorite maps from Bad Company 2. Hopefully! 🙃 Nice catch by using photoshop with the in-game teaser, u/VickeP. Credit to @Croissantindm and u/woessss too. Via Reddit bit.ly/3zj3HG9. https://t.co/hGc0ns9ADW 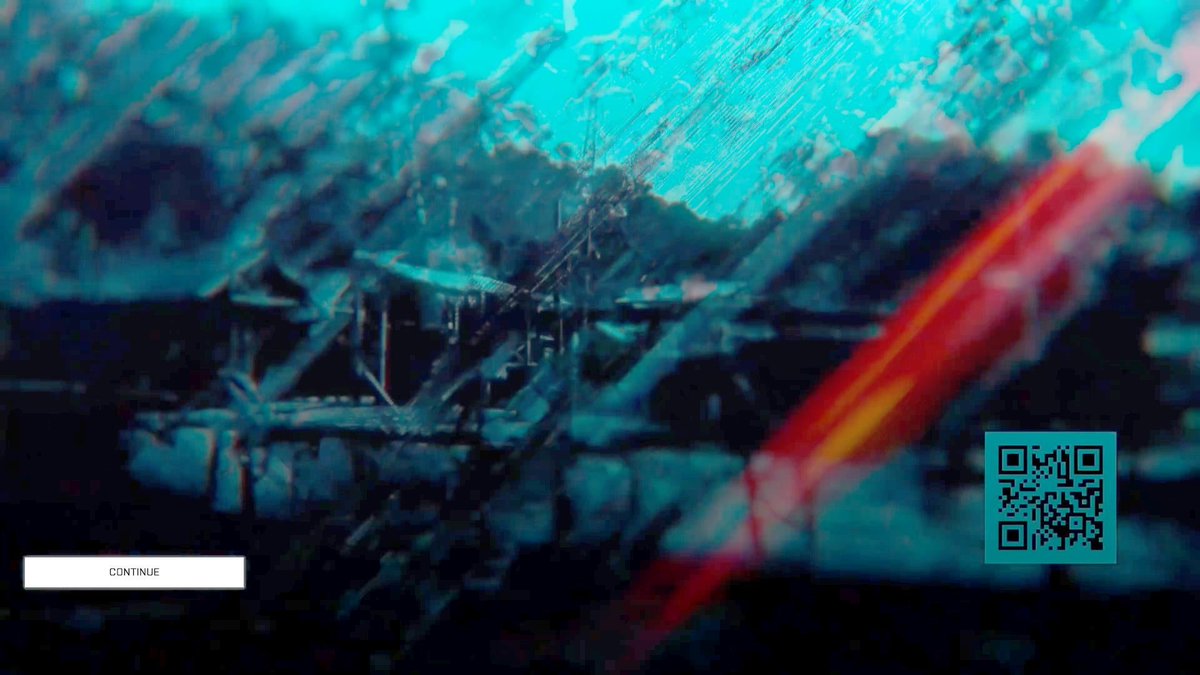 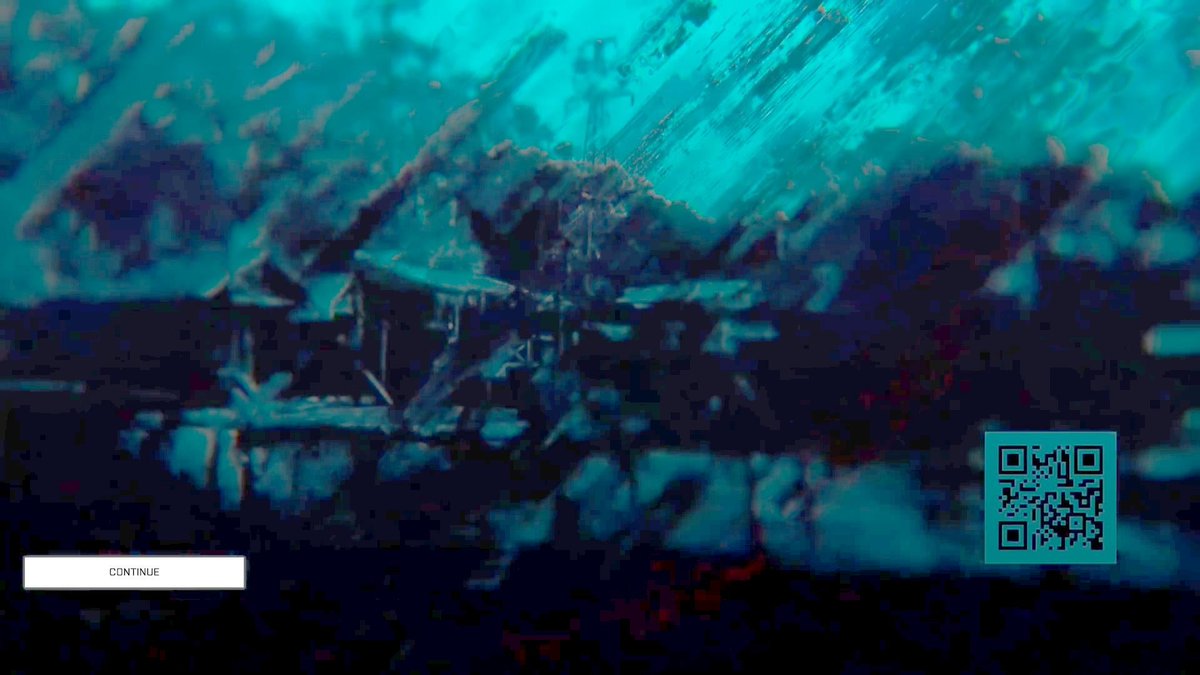 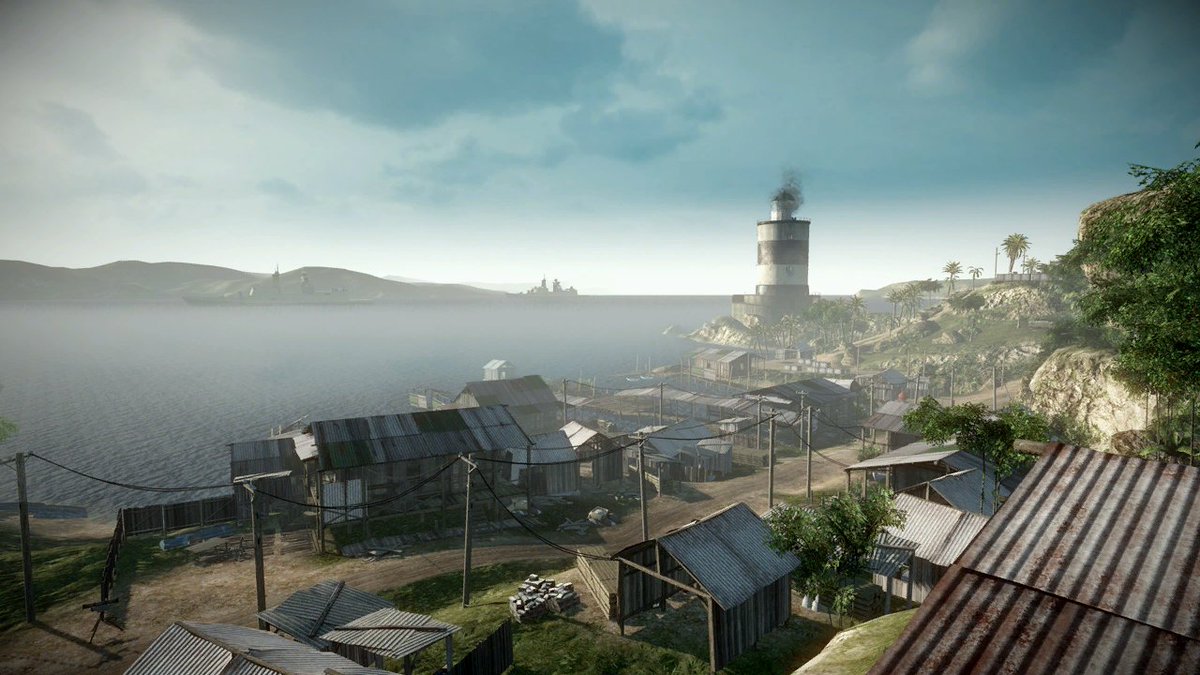 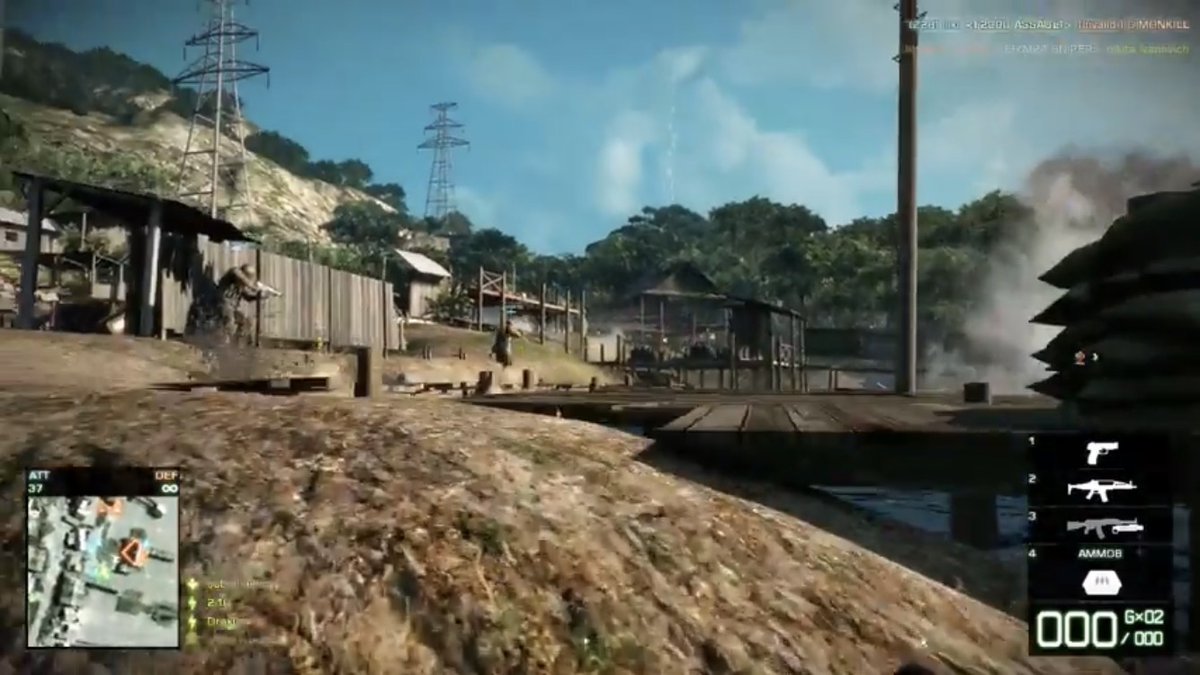 So it seems it’s a pretty safe bet.

There are a bunch of images they sent to people again as well, which folks are trying to figure out.

@whispa The first trio we were in stadium and I caught them sniping at another team. I picked off the first two guys with a Zerg (ZRG) and two headshots. I think the first guy I downed thought he got sniped by the team they were fighting. Surprise MFer! Second guy probably knew when he was on his ass. The third guy started to fight and I switched to the FARA and had him pinned behind a pillar. My teammates got back around into the seating area to help about that time but all my shots landed and it was over.

Second group was a late game wipe. I was alone along the bush line here on the right… 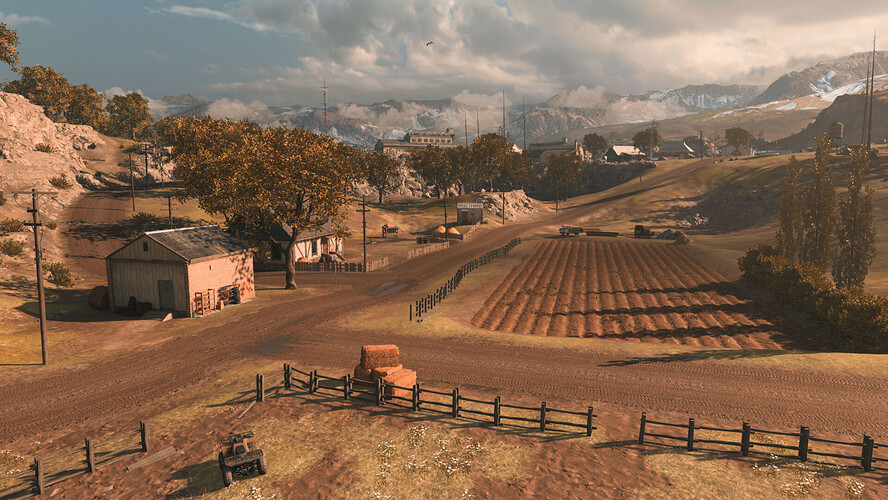 I was outrunning the gas. One teammate was out and the other lost connection to the game. Approaching final circles. I went prone along the bushes because there’s a bit of a divot there. You really have to be looking hard for someone to see them along there. A team of three was in that house on the left but one started pushing out toward me and was fighting with guys on the ridge straight ahead in the distance but to the right of my bushes. I took him down and finished him with a Milano. The other two left the house and pushed toward him when he started taking fire and to get his gear… I didn’t shoot til they were in the middle of the field and then lasered the back guy with the Milano until down and immediately used the rest of the clip on the third guy. He dropped, they had no Self Revive and they were dead. Second guy’s Death Comms were “They’re in the fucking bush–!”

I feel like I’ve really elevated my game lately. I’m running around a 1.30 KD in my last 100. In my last 50 I’m sure it’s higher. I consistently get two kills per game (which keeps you around a 1.0) and I’ve had a number of 6-10 kill games lately. Feel free to check my stats at https://wzstats.gg/ I’m DaveLong on PlayStation.

I’ve actually been thinking about starting a new account when I move to PC this week to see what my KD would look like without all the learning I had to do when the game shipped and I was still not as good at the gunplay of Modern Warfare and sniping in particular. I can be relatively deadly with any of the top Sniper and Marksman rifles now.

I post videos from time to time on my YouTube channel. Bad language in there of course. I often will comment on stupid stuff I do, especially if it’s not a win video. 45 Standard wins now and I think 19 or 20 in Resurgence on Rebirth Island although I play that a lot less. My son joined us this week and we got three wins in a row on Rebirth. That’s in video there as the Special Guest. 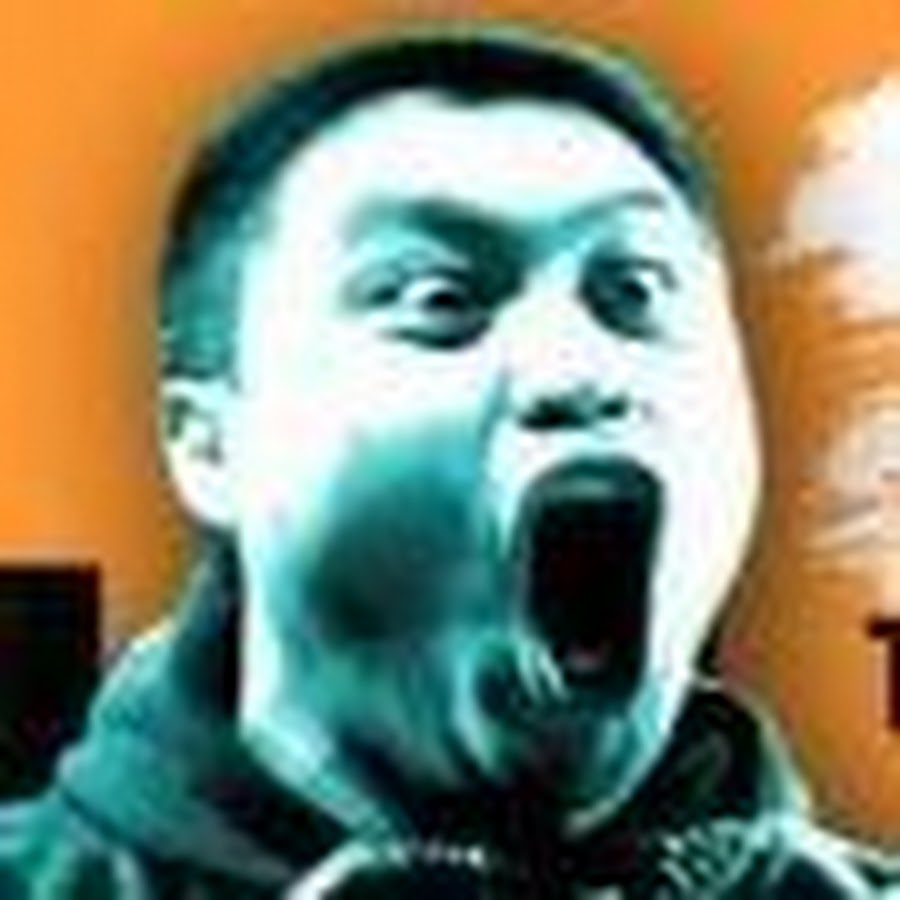 Very cool and that’s a perfect reason why we play these games. It’s times like this that we remember. Love it

My skills have never been this good in FPS to be honest. When I was writing for the mags and websites, I rarely got to review FPS games. All the gaming I did was strategy, racing, popular titles like Zelda for GamerDad, and lots of off the beaten path stuff. It was fun, but it also meant I never retained a lot of my ability from the Quake and Unreal Tournament years.

What makes it “easier” to get good since like 2015 or so is the yearly CoD update and the way that has gotten closer to how Battlefield plays. If you can get comfortable with learning how to use cover, head “glitching”, and just plain old aim sniping, you can really enjoy the gunplay in any modern shooter. Beyond that, it’s about knowing the maps, little tricks to get flanks, etc.

I think I’ve said it before, but I’m playing a lot and I have no problem helping people here get better whether by playing with them or just explaining how to stay alive. The best thing about Warzone for me is that it is a priority to stay alive to get wins, but the balance between that and engaging in combat does lean toward also getting kills. On the big map in Verdansk, you also rarely end up in third party situations unlike Apex Legends which I think has a bit too much of that. Now… Rebirth Island? Head on a swivel, man. Head on a swivel.

Use the meta guns when BF2042 comes out. Don’t fight the meta. The best guns are the best for a reason, usually the higher TTK. The meta will change, and then you change your gun. Also, one thing I see from my teammates and other random players I watch is tunnel vision. Don’t just run straight with your view straight ahead! Keep looking around at all times. See the glint before the sniper pops you. Note where you see people moving even if it’s just a shadow and you’re not sure. Information is everything in these big map FPS games.

We are on different tracks for our FPS skills! Mine probably peeked with the Day of Defeat Mod for Half Life 1. 1 shot 1 kill hard core mode. I was obnoxiously good at that. Since than it’s been a slow decline with age and hand arthritis isn’t helping. I never stopped playing them though with BF being my favorite series. Something about giant sandboxes full of toys to play with appeals to my inner green army man 12 year old. Recently having gotten a top of line gaming rig (my first one ever really) has lead to a bit of a renaissance for me. Not only in time played but actual effectiveness. Never realized how shitty frame rates and poor performance was killing my aim until I gamed at 120+ fps. It felt like I shaved 10 years off my eroding skills…as long as I don’t play for too long of sessions…ha!

My new PC is here though and I’ll be firing that up tonight for the first time. Provided all goes well, the RTX3080 should be a revelation. I’m also a controller player and remain so even on PCs these days. Not sure if you’re playing with mouse/keyboard or controller, but you might be able to save some hand pain with an Xbox controller. It really doesn’t take as long to learn as you might think it does. I know @Mike_Cathcart has dealt with some RSI stuff and he swears by the Xbox One controller now.

Anyway, just have fun. I never expect anything from my teammates. I just play as well as I can. Sometimes I’m pretty sweaty and I always figure with the way SBMM works these days some of my extra can lift up others while when other people outperform their “level” that lifts me as well. It’s all good. In Warzone specifically, there’s always another Gulag to win, even if it’s in the next game. :) 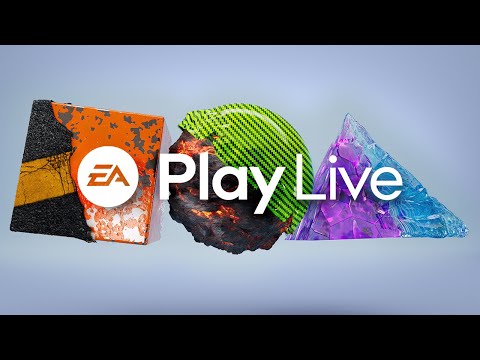