Along with the “hero team shooter” genre in the mid-to-AAA space, you have the Battle Royale shooters in the mid-to-low end space. This one is headed by Brendan Greene, the guy that originally made the first Battle Royale mod for Arma 2. He was also a consultant on the similar mode in H1Z1.

This will go to early access on March 23rd.

a) Isn’t it supposed to be “Battle Royale”? - (rather than Battle Royal) Answered in an edit. Apparently, “yes”.
b) What is a Battle Royale mode/game?

Heck if I know.

The name of this game offends me, and I can’t stand looking at the box art on Twitch, especially when I’m inches away from never visiting Twitch again anyway.

Battle Royale modes are where you start off with a large group of players and they kill each other off until there is one winner. PlayerUnknown was the guy who made the original Battle Royale mod for Arma 2, then went on to work with SOE to develop their BR mode for H1Z1. He’s now working with a Dev house in South Korea to make a full game based on his design. I’ve watched some on Twitch and so far it looks much closer to what he did with the Arma mod than H1Z1.

I watched some of this and “lass jank than the Arma version” seems accurate and a pretty low bar to clear.

What is a Battle Royale mode/game?

A bunch of Japanese schoolchildren are dropped on an island with various weapons and kill each other in bloody fashion until one remains.

That movie was awesome and hilarious.

Beats the hell out of Hunger Games.

Pssssh the whole time I saw the only Hunger Games movie I watched I was saying to my wife, “Battle Royale did it better.”

“Why are they sending them to fight?”
“Doesn’t matter, they just are.”

I guess people are hungry for this.

Blue Hole? That’s the company that made Tera…and stole code from NCSoft I guess.

So, is this the best of the bunch, or is there a better BR game?

I guess this game type isn’t popular around here?

But after watching videos of people playing this on YT and Twitch, I decided to jump in and play it myself, and I’ve gotta say, it’s by far the most intense and nerve wrecking competitive game I’ve ever played. And I even made it to #3 on my third try, by being stealthy and just avoiding people. 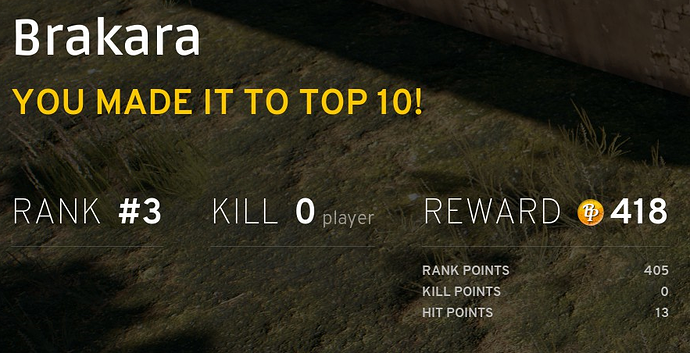 And when the other guy popped up and shot me I literally jumped in my chair. The game’s still rough around the edges, but the concept and execution in this game is pretty damn good. And the feelings I get from playing this is quite unlike any other game I’ve played before.

I’m also curious which BR type game is going to be king. I’ve been eyeing escape from tarkov or something similar, but at first glance it’s buyin alpha looked super p2w so I’m not sure about that one. I did enjoy King of the Kill a bit, but don’t quite have the twitch skills to keep up.

Eurogamer has a nice article about the game.

Sometimes I wonder what the games industry would look like had Bohemia Interactive focussed on polishing and finishing their official version of DayZ, rather than vanishing down a rabbit-hole of granularity from which they never resurfaced. Imagine if players could experience its unique PvP of tense human encounters in a zombie-strewn wilderness, of fragile alliances and galling betrayals, without having to deal with a skipful of clunk and half-baked features for almost four years.

Sadly, we don’t live in that universe. Instead we live in an alternate timeline where the industry hivemind has decided we don’t want compelling, emergent, player driven drama. Apparently all we want is gigantic deathmatches with a survivalist twist. Digital Hunger Games, Battle Royales with customisable combat trousers, Escape to the Country meets the Running Man.

I’ve never really played one of these games but I’ve been having fun with it so far. People should get in the QT3 discord so they can play with us :D

The result is Battlegrounds misses out on one of the most important elements of the Battle Royale concept, those ever-shifting allegiances between groups of people, and the emotions that bind and shatter them; desperation, betrayal, loyalty, sacrifice

In theory that sounds good, but in practice it just turns into griefing, like the Dark Zone in The Division.

Battlegrounds is popular because it takes out all the survival bullshit from these survival games, while still keeping the intensity that comes with long dulls between the firefights. Saying it’s just a slower Call of Duty is a huge disservice to the game.

I was curious and I caved and bought it. After playing three rounds, I caved again and gifted it to the guy I mostly play D3 and Overwatch with. It’s damn good fun and tense as fuck at times.

We duo queued and I showed him the ropes. Made it to the mid 30’s then ran it again. He died early after we mis-communicated our landing zone target. I was close to the center of the contracting play zone and spent a super tense 10 minutes holed up in a building under grenade assault. But I was well equipped and they fled, or were ambushed by someone else. When I was forced to move I got my first kill before dying to the zone field.

I love that games are relatively short and that it is relatively deadly. I love that there is relatively little hand-holding, no kill cam, no directional damage warnings, etc. If you are caught in the open under fire, you are in trouble. It adds tension to just the traversal aspect of the game.

Hopefully they keep focused and polish what’s there. It’s a bit janky in places but seems pretty mechanically complete. Dev seems keen on the ‘realism’ angle, so there is additional bullet physics on the way apparently - penetration, deflection, drag, etc.

Just got my first solo win. Pretty exhilarating. 3 smoke grenades, 2 frags followed by me bumrushing his position got me the win. 4 kills for that run