Battlestar Galactica 16: What Have We Done?

Darkness settled upon the twelve colonies. Then bursts of light. Some civilians managed to escape the devastation and join with a Battlestar that was nearly turned into a museum.

This is a 6 leader mission. Rules will follow the basic rules from the base game with the additional changes for Pegasus.

We will be using all characters from Daybreak and Exodus.

Players are as follows, selected by the true random number generator: 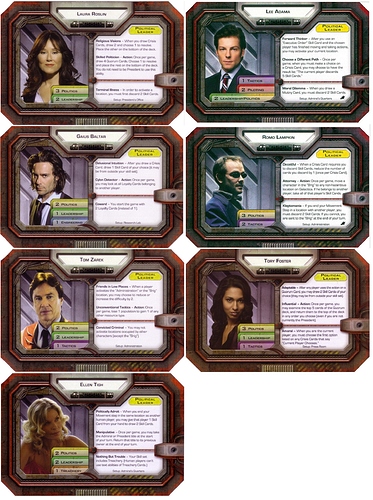 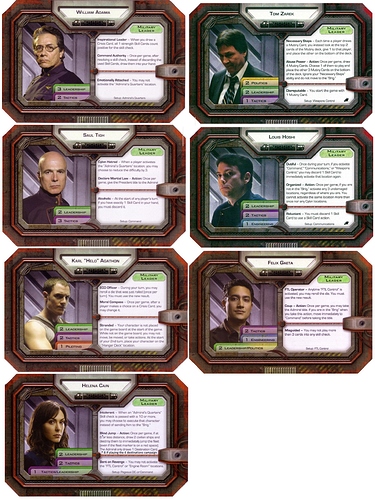 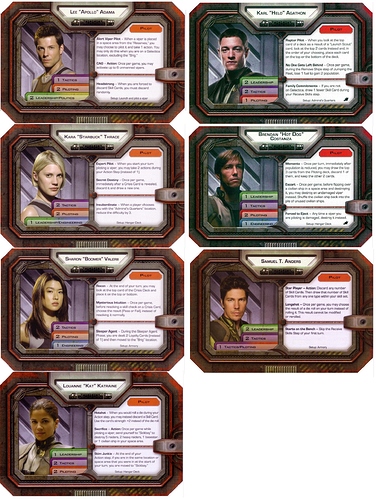 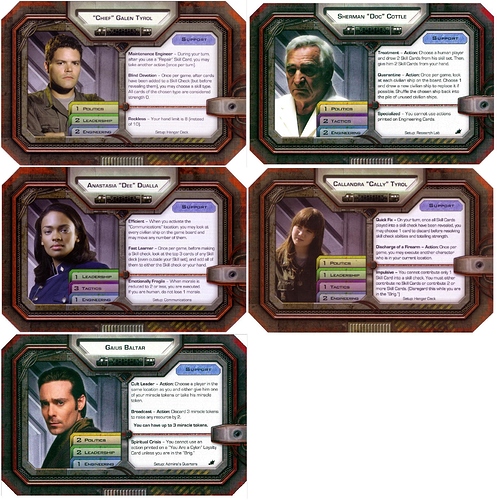 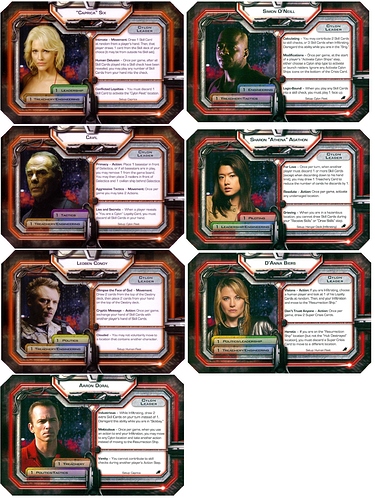 FTL Control Action: Jump the fleet if the Jump Preparation track is not in the red zone*
*may lose population

Communications Action: Look at the back of 2 civilian ships. You may then move them to adjacent area(s).

Admiral’s Quarters Action: Choose a character, then pass this skill check to send them to the “Brig”
*difficulty 7 Tactics/ Leadership challenge

Hangar Deck Action: Launch yourself in a Viper. You may then take 1 more action*
*Viper pilots only

Armory Action: Attack a Centurion on the Boarding Party track (destroyed on a roll of 7-8)

Brig You may not move, draw Crisis Cards, or add more than 1 card to skill checks. Action: Pass this skill check to move to any location*
*difficulty 7 Politics/ Tactics check

Quorum Chamber Action If you are the President, draw 1 Quorum card. You may then either draw 1 additional Quorum card or play 1 from your hand

Press Room Action: Choose another player to draw 1 Mutiny Card (He does not go to the “Brig”). He then keeps 1 of his Mutiny Cards, and discards the rest. You may then discard a Mutiny Card.

Caprica Action: Play your Super Crisis Card or draw 2 Crisis Cards, choose 1 to resolve, and discard the other*
*No activate Cylon Ships step

Cylon Fleet Action: Activate all Cylon ships of one type, or launch 2 raiders and 1 heavy raider from each Basestar

Human Fleet Action: Look at the top card of the Crisis or Destination deck and place it on the top or bottom of that deck, then draw 2 Skill Cards: Or: Action: Infiltrate Galactica.

Airlock: Action: Choose a character and pass this Skill Check to Execute them. (12, Politics-Tactics-Treachery). Reduce the difficulty of this check by 4 if the character is already in the ‘Brig’.

Engine Room: Action: Discard 2 Skill cards to treat the next Crisis card drawn this turn as if it had a ‘prepare for jump’ (jump prep) icon. 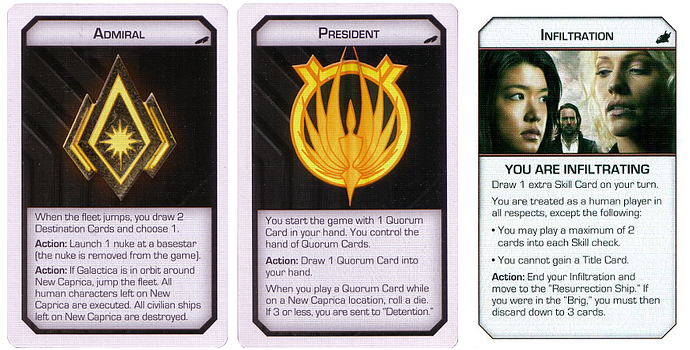 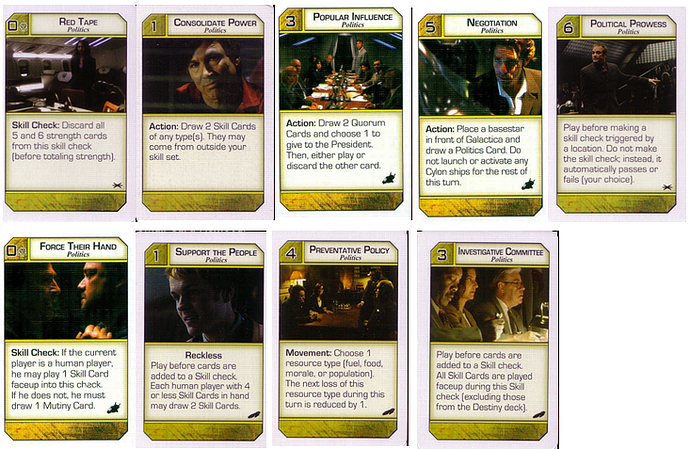 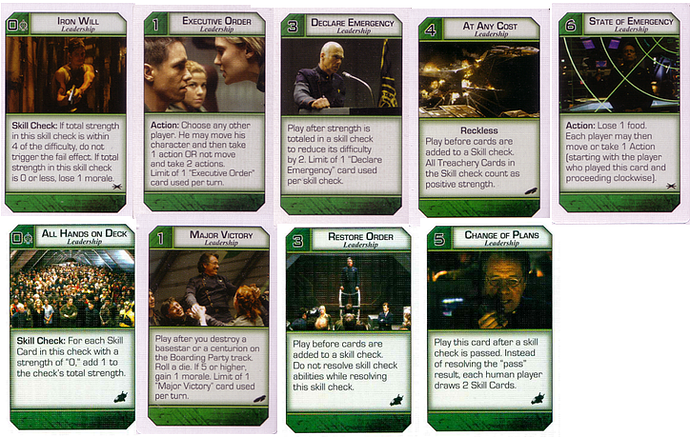 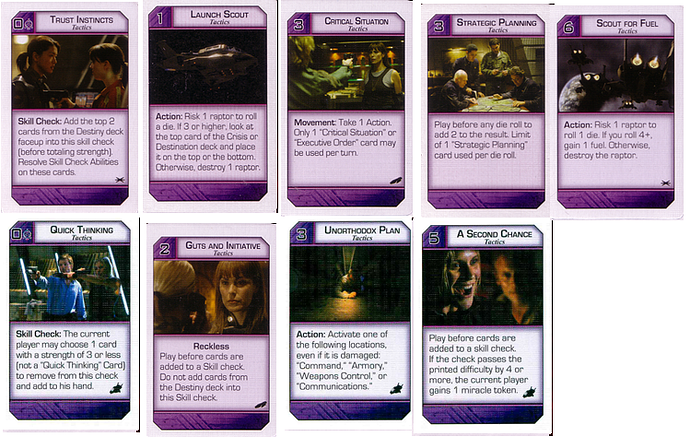 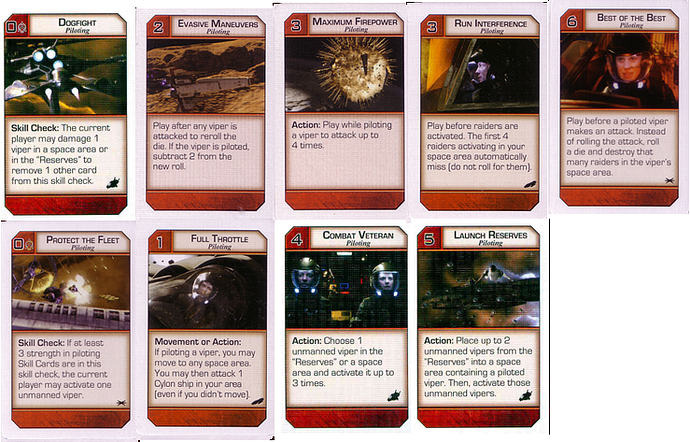 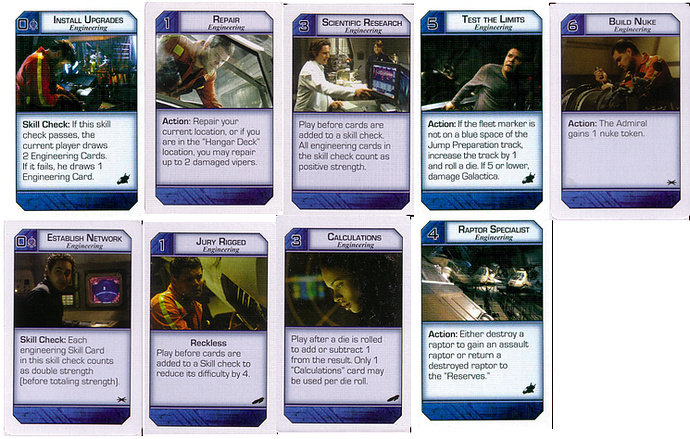 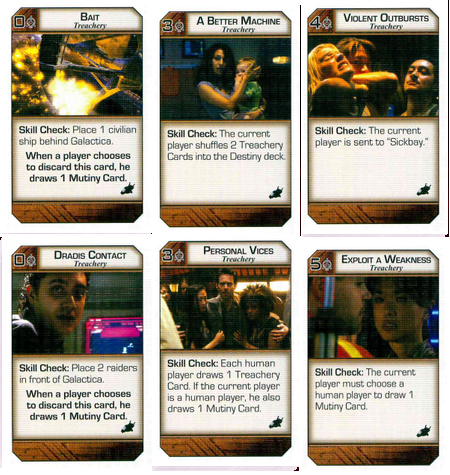 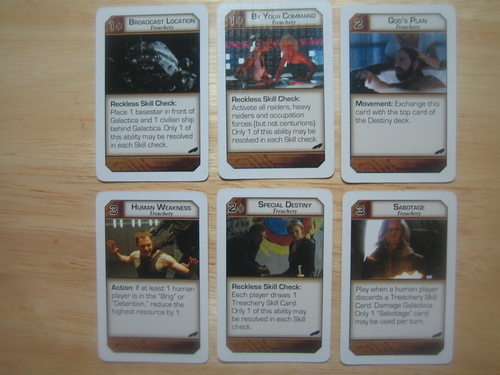 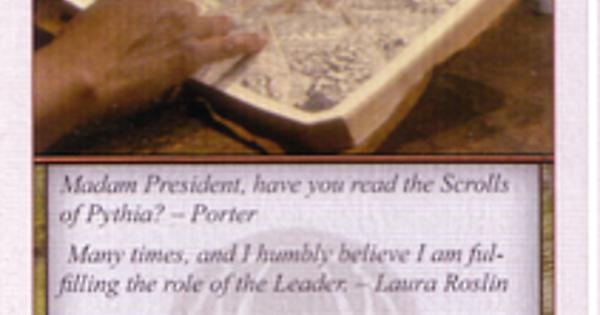 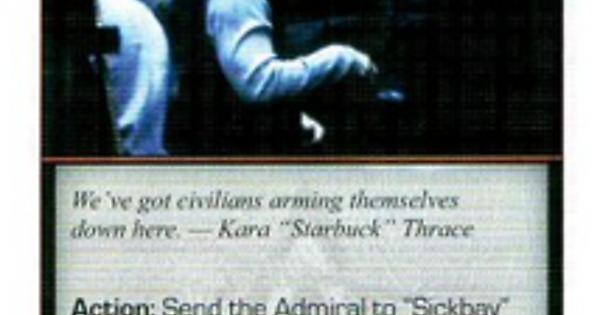 Here’s our picking/turn order. You all know the picking rules by now eh.

Admiral Cain, Kat, Cally, Tom Zarek (political), Gaeta and Cavil are off the board. New characters!

I am 100% confident in my humanity this game, unless I’m Cylon Leader since I’m picking last. I’m which case I will be 75% confident.

Admiral Cain, Kat, Cally, Tom Zarek (political), Gaeta and Cavil are off the board. New characters!

This should be a new Legacy rule. Every character must be used before we recycle them!

Also, maybe the losing side for each game gets to pick a tiny bonus for the next one? +1 Morale, your choice of 2 Supercrises when you reveal, etc.

before we recycle them!

This should be a new Legacy rule. Every character must be used before we recycle them!

Man, but then it’s going to suck being the person stuck with Anders.

For my part I’m thinking of taking one of the characters never before seen, and debating between Aaron Doral and Doc Cottle. Will probably tag Doral

I thought we were getting Fat Adama this game? ;)

For the record, here is the complete list of characters not yet played:

Of those Anders really sucks, Simon looks like he may suck too (his bonus is fairly low impact due to hand limitations). Romo looks interesting, with a very fun OPG, but very situational and with sub par hand draws. Doc is probably not great as support, due to not being able to repair, but his ability has potential (and playing as him could be fun for the RP aspects). Aaron looks to be actually good, if not as obviously powerful as other Cylons. That said with Agendas his OPG is almost always relevant.

I thought we were getting Fat Adama this game? ;)

Yeah, Simon seems dreadful as a CL. Lampkin does look like he’d be fun though.

If Ander’s once per turn was a movement it wouldn’t be so terrible…but an action??

You know, I just realized something. Last game? Not a single Mutiny card. How about that.

Ok guys, I want to see at least two of Lampkin, Aaron, and Doc. Get some real new blood into this game. @rowe33 you seem interested in Romo, you in for that? Can we get someone for the Doctor? Lets really upend this ship here ;)

If Ander’s once per turn was a movement it wouldn’t be so terrible…but an action??

Exactly. I think as an action, it makes him almost unplayable.

I had a mutiny near the end, but didn’t get a chance to use it. It was the “blow up Galactica, but maybe blow up a centurion” one.

I am leaning towards a pilot but Anders… Hm… Not so sure.

There’s a good reason no one plays Anders or the Doc…I mean, draw 2 Engineering cards every turn…can’t use them, that’s amazing?

I mean, draw 2 Engineering cards every turn…can’t use them, that’s amazing?

However his ability basically gives him an effective draw of 7 cards, and he can pass off to others who can use them. It has a lot of interesting potential, while also playing hell with Cylon detection because it mixes draws. Done right? He could be a powerful human tool. Done poorly he confuses the matter, or even empowers Cylons. High variance is how I would describe him. And not as obviously useful as, say, Cain’s OPG.

Eh, I want to play around with Agendas. Aaron Doral for me

Speaking of, what were @soondifferent’s agendas last game?