Why MGs instead of Small Lasers? Heat? I generally find the higher damage and lack of ammo need for Small Lasers offsets the heat problem and I find them better than MGs. YMMV.

Here is the Grasshopper I’m running in my current campaign, deployed on missions where I feel there is a good likelihood of light or medium mech opponents: 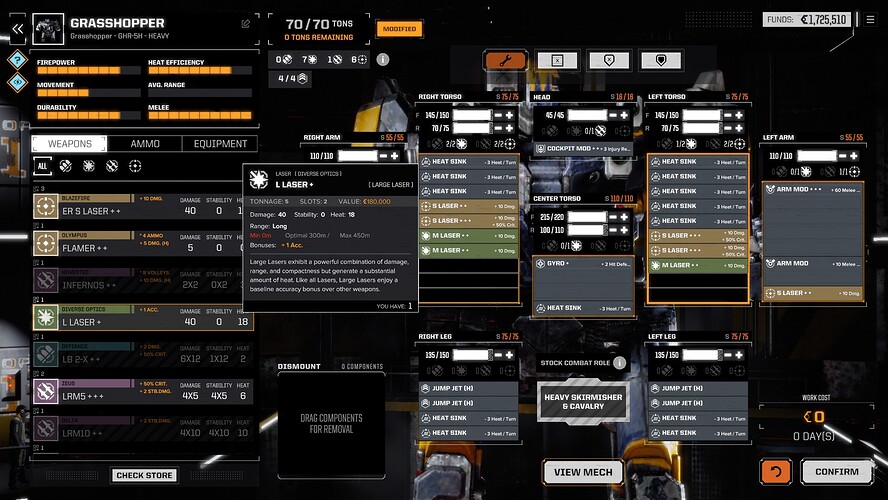 Dangit that’s a bad screenshot b/c the Large Laser pop up is blocking the right arm. The right arm is set up just like the left.

Yeah, I couldn’t get the heat under control with 6 S Lasers and 7 M Lasers. I also like the additional stability damage from MGs. It adds up.

I like Mags as well… A little cheesy, but the extra chances at pilot damage make it easy to salvage mechs

I think it’s changed but i remember on release that even though MGs were one of the cheapest weapons they were very scarce, so every system i visited i had to scour the store for the odd MG to add to my collection. It didn’t really matter if i wasn’t going to use it at the time. I think they finally changed MGs to be much more common.

The Grasshopper is way better in Battletech the Game than Battletech the Board Game. Jumping around and alpha striking is much more viable than the long-range skirmish game of tabletop. I think it took me a while to find a better heavy replacement.

My approach to the Grasshopper was to treat its melee attack (plus the point weapons like small lasers) as the Alpha Strike and the Medium Lasers as the alternate ranged attack for when I wasn’t close enough to smack someone in the face. This works well when there are plentiful medium or light opponent mechs on the field, but you do have to be careful not to expose the Grasshopper to alpha strikes by enemy heavy or assault mechs.

To illustrate what I mean, the combined damage of melee plus point weapons in that Grasshopper I posted is over 400 points of damage, with more than 200 of that being a melee attack that hits one spot on the enemy, back up by 180 points of laser damage as an FU. That kills pretty much all lights in one hit (except for the occasional mean little Panther), and most mediums.

Nice! I needed a reason to jump back in - testing this might be it. Are the mele weapons hard to come by?

I sacrificed ammo and some armor on the non-gun side of the mech to get some jumpjets in there. However, I just did the Flaspoint where you fight that Big Crab Claw Gladiator dude and the FU Mech soloed that final mission, chugging slowly along, shooting every mech in the face, and stomping on all the vehicles. It was VERY satisfying to go up to Mr. Big Crab Claw dude and say “FU THAT’S WHY”.

Awesome story! I think it get it better now…your pilot was good enough to headshot. I was always too scared once I’d leveled a pilot to be that good to put them into a light mech, or even a medium. The game never incentivizes me to send anything but the monsters.

I think I need to restart a campaign

Actually with a UAC20 I was just going for core shots. It took 1 core shot each to kill the lesser mechs, and 2 for Mr. Crab dude, and I also stomped on the vehicles.

Are the mele weapons hard to come by?

The good ones that give a lot of damage boost are pretty rare (you can tell b/c they have ++ in their description) but the ones that give 5 or 10 points of damage for no tonnage are only semi-rare. Best bet to acquire them is join the Black Market and keep the pirates at least neutral-ish. I believe they may crop up more frequently on worlds that are former Star League worlds (you can filter in the star map).

@Aleck, is there an easy way to manage multiple mods at once, like having BTA 3062 and BT Extended 3025 Commander’s edition? It would be nice if you could save a list of mods to enable so you could switch between the 2.

BTA 3062 is pretty easy to set up, and adds a ton of stuff to the game. But man, depending on RNG, it’s brutal, even when you set stuff to fairly easy.

BTA answered my question when installing it said it wipes the mods folder. So if I want to play Extended again I will need to re-install those bits. It looks like they name things differently in their cache of the community asset bundle, so I don’t know if I’ll be able to point the actual cab utility at the cache created by BTA. Oh well, if I enjoy it I probably won’t go back anyways. :)

Man, first mission is on a mars planet and there are at least 6 mechs and 2 vehicles. Not weakened or lightweights either. Got 1 down, but I dont think it will end well.

One thing I like about Extended that BTA doesn’t seem to have is the various start dates.

The wiki advises new players to eschew the desert missions, which is probably wise.

I also just figured out that if I advance the time manually by like a day, I can get the “live fire exercise” mission, which pays something like 300k C-bills and where your mechs get free and instant repair and rearming. Your pilots, though, if injured, stay injured like normal.

Anyone given this a run using the mod: Battletech Extended 3025 - Commander’s Edition?

Seeing this thread flare up recently made me think it might be fun to give this one a run again using what I’ve read to be a rather well made mod, it’s been quite awhile since I gave this one a thought (despite kickstarting it and playing nearly 200 hours) but I never bought any of the DLC and was wondering does this mod require the DLC?

Did the performance ever get better? I played a LOT of this at release. Circled back a few times with the DLC and mods, but loading and general pacing was so atrocious I gave up…
Which sucks because I really like the game.

I still find it slow.

I played some with Battletech Extended before, but I have the dlc. Searching online it seems like it does not require the dlc, but you’ll miss out on some mechs.

Thanks man, that’s what my search revealed as well, so I’m considering picking them up, if I’m going to take another run at this it might as well be the complete package plus the mod.