Are they dropping GFWL?

And I only finished Minerva’s Den last week! All those achievements I missed out on!

I’ve not had too much grief with GFWL thankfully but the sooner that thing is dead and buried, the better.

Edit: Oh, and if the pair-bond between Bioshock 2 and GFWL is severed, hopefully that will draw more people to Minerva’s Den, a most excellent bit of DLC. The Protector Trials was great too if you enjoyed the combat mechanics and the Little Sister gathering sections, which I did.

“I just wanna hold her!”

Wait, Minerva’s Den is out on Steam? I thought it was a GFWL type of deal? But if that’s the case, why have they included Steam achievements for it?

Nope. Minerva’s Den is not on Steam for purchase, which makes this doubly weird.

Interesting, I have BS2 and Den, I wonder if multiplayer will come back to life?

Did any of you folks get to play the multiplayer back when it was released? I was late to the party with Bioshock 2 but the multiplayer looked pretty good and I liked how 2K Marin set it during the Rapture civil war. I had a nosy round the maps on my own which was fun but it’s a shame there weren’t others playing. Oh well, I suppose that’s the price you pay for being a latecomer.

The multiplayer was excellent, but it wasn’t done by 2K Marin. It was by Digital Extremes (who would go on to make The Darkness II and most recently the Star Trek game). As you saw, the maps were really good, especially the DLC maps. Siren’s Alley would be one of my all-time favorite multiplayer maps in any game. The Fishbowl – I think that’s what the big open map with the diner was called – was also memorable. Great weapons and plasmid combos, and on-map doo-dads like turrets and booby trappable vending machines. The whole thing was situated in a nifty leveling up and unlockable system with moddable weapons. Also some really cool gameplay modes that took advantage of Big Daddys and Little Sisters.

Unfortunately, for all the fine work Digital Extremes did, 2K really dropped the ball in terms of cultivating a community. For instance, the DLC maps were almost literally impossible to play in public games because of how the awful matchmaking worked. And it needed bots. It really needed bots.

Oh, man. I thought I was the only person that really liked the MP of Bioshock 2. I was so pissed that everyone moved on so quickly from that game.

Naturally, I’m very keen to see and hear more about The Bureau. 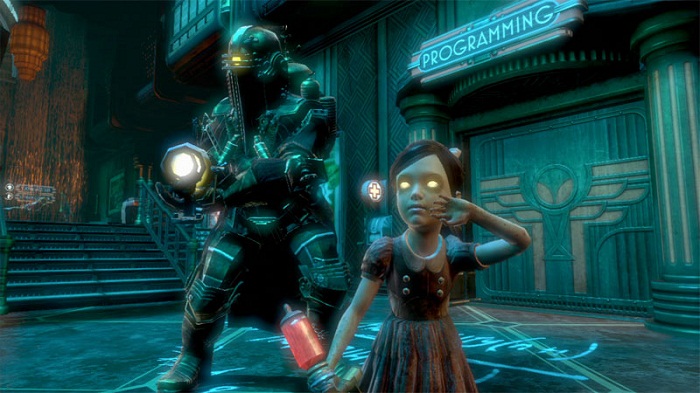 The Minerva’s Den DLC for BioShock 2 is now available on Steam. Long trapped behind Microsoft’s Games for Windows Live, the DLC adds a self-contained episode to Tom’s favorite BioShock game. There’s also a patch for the base game that adds full...

Plus, if you already have the base game on Steam, they added the DLC to your account for free!

I should also mention that the Protector Trials (previously a free DLC only through GFWL) has ben rolled into the patch, so free to everyone on Steam.

MULTIPLAYER HAS BEEN CONVERTED TO STEAM!

Thats pretty damn awesome! I really enjoyed Bioshock 2 and never got to play the DLC, will have to give it a go at some point.

Plus, if you already have the base game on Steam, they added the DLC to your account for free!

Holy carp! That’s what happened! Yay for me not trying to buy it on GFWL before it died!
Now I can leave it unplayed FOREVER! punt to backlog pile

Hopfully the batman arkham city and asylum games strip out the GFWL too.

Hopfully the batman arkham city and asylum games strip out the GFWL too.

There has been work done in the background according to the people that follow the Steam registry stuff. Apparently, it should be pretty easy at this point since the Steam stuff is hooked in.

My concern is for GTAIV. AFAIK, no specific signs have been seen that there’s been any work done to prepare for the GFWL closure.

Just checked my Steam account and my Bioshock 2 has the Minerva’s Den DLC. That is a really nice gesture by 2K.

Has Bioshock (1) been steamwerked yet? I’m not sure if it did and I missed it.

Has Bioshock (1) been steamwerked yet? I’m not sure if it did and I missed it.

BioShock was always available on Steam without GFWL. It came out just before everyone lost their minds and went whole hog for GFWL.

A couple of updates:

BioShock was always available on Steam without GFWL. It came out just before everyone lost their minds and went whole hog for GFWL.

Man, my memory is going. I’ve got the physical disc and it’s on my Steam account and I could have sworn it used GFWL. Thanks.