FYI, I believe this is the prequel to the Z Nation series on Syfy. I really enjoyed that series but I could see where others wouldn’t. Not sure if now that Netflix is involved production values will be higher or not.

They better have some Danzig cameos. It works for Portlandia.

This is pretty good – a solid B+ as zombie theater goes. The first season is only eight episodes, so it doesn’t feel the bloat from which similar shows suffer. As with most zombie flicks, it’s more about humanity, tribalism and desperate choices than the actual zombies, but they handle those themes reasonably well.

I have read that it’s set in the Z-Nation world, but you wouldn’t know that from this season. The production values are higher, and it doesn’t have the “bad syfy monster movie” vibe that turned me off Z-Nation early on.

You waited until today to post this didn’t you? Well done! 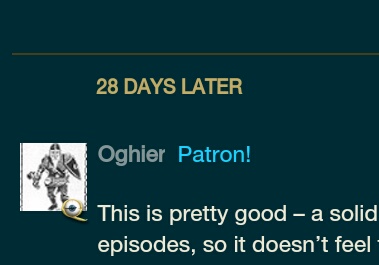 This show received good endorsement from Stephen King himself. And that made me curious enough putting this in my list to watch.

@StephenKing: BLACK SUMMER (Netflix): Just when you think there’s no more scare left in zombies, THIS comes along. Existential hell in the suburbs, stripped to the bone.

@StephenKing: BLACK SUMMER: No long, fraught discussions. No endless flashbacks, because there’s no back story. No grouchy teens. Dialogue is spare. Much shot with a single handheld camera, very fluid. Showrunners could learn a lot from this. If they could work, that is.

There’s one section several episodes in which involves one survivor trying to deal with one zombie. It goes on for a long time, it has no dialogue, and it’s pretty damned good.

Just saw the first episode. The zombie seems to be aware of their surrounding, almost having a mind of their own. That seems strange to me. Is that how zombie in Z Nation behaves?

Z Nation is very tongue in cheek, so Zombies do what ever the writers want them to do. They are sometimes very self aware and at other times very clueless.

I just finished the season last night and have some really mixed thoughts:

On the plus side, i really enjoyed the drop you into the story already in progress nature of things at first. Didn’t waste time with unnecessary cruft and left space for characters and background to develop.

On the major down side, I also felt as though it didn’t waste time with the absolutely necessary stuff either. We barely understand things better in the end than at the beginning. The internal consistency of how the zombies & zombie plague work is, moreover, for shit.

I definitely enjoyed those aspects of it too.

I believe they want you to be confused and they went for a level of discovery here throughout the series…you don’t know the zombie attributes…you have to see/learn them. Same with the “what’s happening?”. The Diner Episode is a great example of this I think. It is when they begin to try and deal with getting rid of zombies and the first time we hear mention of what is coming and why there would be a flash evacuation.

My biggest down side seem to be there was some continuity issues with the story. The first episode was too jarring at times as some of the little scenes were too short to really allow you to focus on the environment and events. Also, things like the motivation for “The Plan” seemed to escape me.

Don’t understand where the idea of a Z Nation tie in came from. This show is nothing like it or like that world (slow Romero zombie world).

I do like this show a lot though. I love that the fast zombies here aren’t just some throwaway thing. Usually in a movie with fast/destroy the brain zombies you have pretty much every character becoming an expert marksman. As much as I love the Dawn of the Dead remake, it really annoyed me to see people downing one running zombie after another with perfect shots.

What I like in Black Summer is that fighting is messy and clumsy. You’ll see people empty every round they have in a zombie to zero effect. Even people who are decent shots like Spears have trouble downing a single zombie. Someone mentioned the diner episode. One of the things I loved about that episode is that you have five people trapped in a diner by two zombies. And they’re scared. When they go out to fight, the battle is clumsy and they’re mostly ineffective. That’s awesome. The show really leans into how terrifying it would be to face even small numbers of these things.

Also love that in the last episode they start out slowly taking out one zombie at a time. You get a feeling like “we got this.” Then suddenly it all changes. Not only do they not got this but the whole thing devolves into mass chaos.

Agree up to point. But to me it feels as though there’s no payoff because you never do learn much. There’s no there there.

Are you saying you don’t understand why they are marketing it as a Z nation show or why people are associating it with Z Nation? It is created by the same people as Z Nation and is essentially a prequal to Z Nation.

But the tone and zombies seem completely different.

I haven’t seen it yet, but I’ve heard that. I guess they decided to do something different with it, which is probably a good idea. I really liked Z Nation, but it doesn’t make sense to end it after 5? seasons and then just do something exactly the same. I had a hard time getting into Fear the walking dead or whatever it’s called because it was just basically the walking dead.

I think it may have started as a prequel but it’s definitely not set in the same world. Z Nation is a classic slow zombie setting. Black Summer is fast zombies. I love both shows but there is no overlap at all in setting, tone or zombie lore between the two.

Later in the series they run and they don’t fall down when shot. Then you have the “tumbleweeds”. All sorts of weird/comic stuff.

Trying not to spoil - Diner Scenes show they were not the nicest of people, but I agree the risk does not quite make sense.

Yeah, this is one of the glaring continuity issues of many, as it is a flash evac, lots of cars not in use. Most stores have never even been entered far less looted. Keys should be available. Fortunately IMHO the series is fun enough to overlook these things after seeing them ;>

why the black truck guys keep on stalking William and Sun? The show implied that they are after their gas. These are complete strangers and are they just being mean to each other for fun? It’s hilarious to see them together now in the diner (haven’t watch Ep 3 yet). Karma!

I don’t really think it needed explaining. They weren’t good people. They were looking for gas, supplies and just to have fun terrorizing people.

why those on foot can’t get on one of the hundreds of cars I saw littering in every drive way? The soldier guy said “it would be nice to have a car” while he trek with 3 other people on foot and yet, cars were everywhere in front of him! Whatever happened to the McGvyer (I can start any car anytime one see in all movies?) skills that seem pretty common in movies? Sure, maybe you need a key - break into a house and grab the car key. Come on!

This show isn’t about everyone having those kinds of skills though. I couldn’t hotwire a car and I don’t know anyone who could. Maybe if we had time to experiment and figure it out we could do it but the zombies don’t give anyone time. I guess they could have had a character able to do it but it wouldn’t feel realistic to me. I do think Barbara stole the van she was in or at least it was implied, so maybe someone did.

As for getting keys, I think that going into a house to look for them would be dangerous as hell. Probably not worth the risk when the keys might be very hard to find or not even in the house. How many people ran with car keys in their pockets and died a mile or two from their vehicle? Also, they make a point that gas is getting scarce. How many cars simply ran out of gas and were abandoned or had their gas already siphoned?