Back in 2007 I worked on a movie called Black Water, about a group of friends on vacation whose boat is tipped over by a large saltwater crocodile which proceeds to hunt them down one by one. I worked with the director on the storyboards to ensure the crocodile’s behaviour was realistic, and then we used live crocodiles to get all the shots. It was a blast and I think even @tomchick quite liked it.

Well, prepare yourself for the sequel! Black Water: Abyss, being released at some point this year although with all the covid-19 disruption who knows what will happen. In the meantime, here’s the movie poster. I again acted as the crocodile behaviour advisor on the script, and worked with the director to film most of the live crocodile sequences. Smaug plays a key role in the movie. ;) 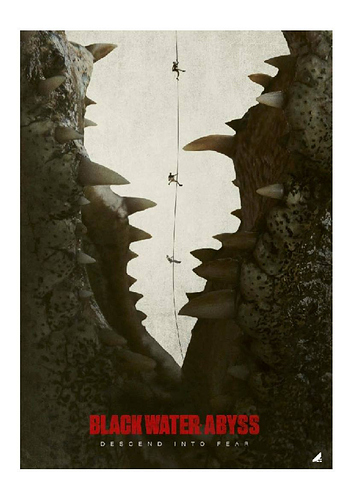 Nice! Will have to look for the original.

Black Water is a pretty good movie. It is available on Hoopla and Tubi Tv according to JustWatch.

Back in 2007 I worked on a movie called Black Water,

I remember. Great stuff - glad youve done it again. It was definitely one of the best beast attacks movies.

One thing that always bugs me in shark/croc/gator/anaconda/bear/wolf whatever movies - is it even possible for a beast like that to eat more than one person without being satiated for days/weeks? These movies always have 'em eating 5 or more an hour. I realize it’s just entertainment, but wish they’d hew a little closer to reality. 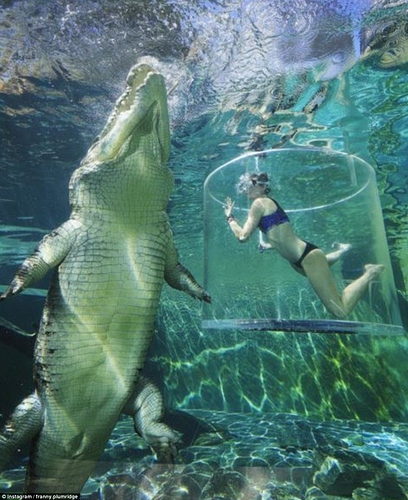 One thing that always bugs me in shark/croc/gator/anaconda/bear/wolf whatever movies - is it even possible for a beast like that to eat more than one person without being satiated for days/weeks? These movies always have 'em eating 5 or more an hour. I realize it’s just entertainment, but wish they’d hew a little closer to reality.

Rewriting this in an edit. Like I said it’s not realistic at all because the animal is simply a monster - for storytelling purposes - with an animal skin. They don’t behave normally or realistically because otherwise there would be no movie. Wolves don’t behave anything like the way they’re portrayed in movies and in games. Neither do bears, who usually attack defensively rather than going on killing sprees. There are stories of rogue animals that exhibit abnormal behaviour, a lot of it’s exaggerated, but some is based in reality and that’s the currency these stories deal in, but gives a very misleading impression about what the animal’s normal behaviour is.

And then you have animals like crocs and sharks that simply can’t fit that much food into their stomach without going off to digest it for a couple of weeks. So yeah, monsters dressed as animals. I guess my job is trying to get the situational behaviour right so you’re focusing on whether what’s happening onscreen is believable but being distracted from the bigger picture. :)

The Cage of Death! Tourist pays to get dropped into a perspex tube while a crocodile is fed in the water beside them, so they get to feel like they’re actually in the water beside the crocodile. It’s quite a thrill. We have a similar setup with Smaug, except ours is not public and designed for getting realistic underwater footage (the pool looks like a river, complete with fish, plants etc), plus ours is an open aluminium mesh so you can feel the water pressure from the crocodile, which has freaked many a presenter and camera operator out when they’re not used to it.

By the way, the crocodile in that photo is much closer to the camera than the lady in the tube, it’s not really that big!

Oh wow, I’d not thought about that! Fascinating stuff.

I do recall now you mentioning in the past you worked on Black Water, after my girlfriend and I had watched it! We weren’t so keen on it, but then again, there aren’t many animal monster flicks we outright like. I did quite like Lake Placid but mostly because it was daft and funny in places. The croc was absurdly big too which I think helped serve it as an anomaly!

Will keep an eye out for this one though! :-)

Like I said it’s not realistic at all because the animal is simply a monster - for storytelling purposes - with an animal skin.

Yeah that’s always bugged me about Jaws - I have to give it credit though, because seeing that movie at a young age (likely too young, really) inspired me to consume (ha) everything I could find about sharks. Unfortunately all that information led me to realize that sharks just don’t behave that way, not even taking into account the ‘rogue shark’ theory that was in vogue when Benchley wrote the novel. Ah well, we’ll always have the Indianapolis speech at least.

Whatever you do, don’t watch Jaws: The Revenge.

You’re about thirty or so years too late for that advice, but yeah that movie has an even looser relationship with reality than the previous movies did. For all I know, there are people out there who believes sharks can actually roar like a lion! 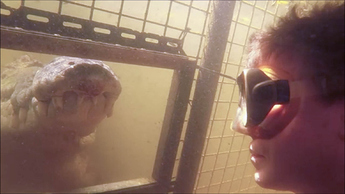 This is our original barrier before it was replaced with an aluminium version (to stop it from rusting), and yes I’m really that close to Smaug. We trained him to stop at the barrier, so that when we later installed the camera port (which is what that disturbingly large hole is!) he would hang just outside of it for filming purposes. And yes, despite many opportunities to do so, I have resisted booping him on the nose. This is why I am able to type this.

Ah well, we’ll always have the Indianapolis speech at least.

Jaws remains a masterpiece though, despite its dated shark portrayal. I think even most shark biologists appreciate that there’s an underlying respect for the shark and its power over people which still comes across. The sequels, uh… not so much.

Anyway, it’s not like Black Water is attempting to change the face of cinema or anything. It’s still just a fun horror movie, but one with a somewhat more believable crocodile.

…it’s not realistic at all because the animal is simply a monster - for storytelling purposes - with an animal skin.

But you see, the shark is a metaphor.

(Protip: that’s how you get around almost any dumbness in a horror movie you like.)

And yes, despite many opportunities to do so, I have resisted booping him on the nose.

I WAS JUST ABOUT TO TYPE THAT YOU SHOULD TOTALLY STICK YOUR FINGERS OUT THAT HOLE AND BOOP THAT LITTLE CROCODILE ON TEH NOSE!!!11!! No joke. The entire subtext of that picture is that the cute little smiling croc just wants an affectionate boop on his nose.

We trained him to stop at the barrier

How do you do that?

Speaking of animals as monsters movies, I’m in the mood for a very silly giant shark movie, so should I watch The Meg or Deep Blue Sea?

Which puts you off more, pandering to the Chinese or to Christians?

The more ridiculously pandery the better, in my current mood. I want entertaining terribleness.